You Are Here: Home → 2011 → July → 19 → Hacienda Luisita farmworkers scoff at being called ‘stockholders’

“Are stockholders subjected to exploitation and abuse? Are stockholders deliberately kept in the dark and excluded from all pertinent discussions regarding how a business is run?”

MANILA – “Do I look like a stockholder of Hacienda Luisita to you?”, Lito Bais asked. He was smiling as he posed the question, but there was seriousness in his tone. He raised his callused palms and turned them over showing skin darkened by the sun. His hands are not, as he terms it, the kind that office executives have.

Bais is the president of the United Luisita Workers Union (Ulwu) in the sprawling plantation owned by the family of President Benigno Aquino III. Recently, the Supreme Court laid down a ruling that farmworkers in the Tarlac hacienda be made to choose “once and for all” whether they want to be stockholders or landowners via a referendum and secret balloting. Ulwu and the Alyansa ng mga Manggagawang Bukid sa Asyenda Luisita (Ambala) are in the midst of a campaign calling for a boycott of the referendum.

“I have been working in Hacienda Luisita since 1986, and for the longest time the Cojuangcos have called farmworkers like me as ‘stockholders.’ Do I like a stockholder? By my reckoning my supposed shares amount to a mere P22,000 (US$ 511.63). The Cojuangcos expect me and other farmworkers to settle for that measly amount and stop fighting for our legal and moral right to own the land that should have long been placed under agrarian reform. They cannot buy us out of what is legally and morally ours,” he said.

Bais said the high court has twisted the law into a pretzel to favor the Cojuangcos. According to him, the institution that was supposed to uphold the law has bent over backwards to protect the interests of the Cojuangco family at the expense of justice and the farmworkers. 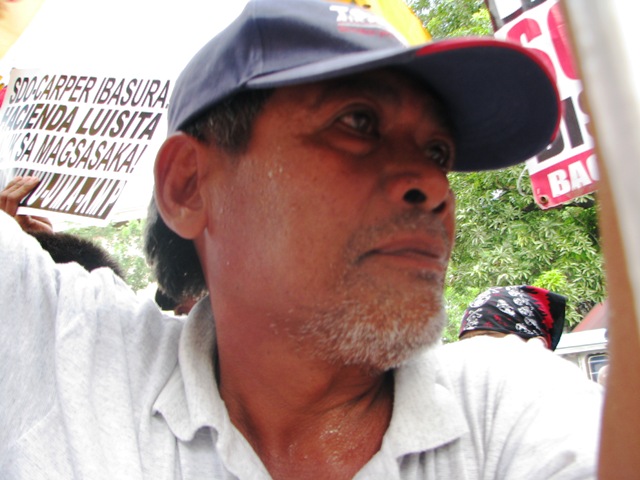 President of the United Luisita Workers Union (Ulwu) Lito Bais says the high court has twisted the law into a pretzel to favor the Cojuangcos. (File photo / bulatlat.com)

Then it called for a referendum to supposedly allow farmworkers to decide whether they want a share of the 4,915.75 hectares of the sugarcane plantation up for distribution or own parcels of land.

“It is ridiculous. The SDP was the main program enforcing the SDO — you do away with it and the SDO is worthless and should no longer be valid. The High Court contradicted itself in its decision. As for the land that is supposed to be open for distribution, it is not 4, 915 hectares but 6, 500 hectares. Hacienda Luisita in its entirety should be put under agrarian reform and given to the farmworkers,” he said.

Bais is also adamant in declaring how the Cojuangcos have been breaking the law left and right by leasing or selling various areas of Hacienda Luisita to various business entities. According to him, because the lands are under legal dispute, the Cojuangcos should not have been allowed to forge any business agreement with anyone concerning the land.

“That is why it is stupid how they pretend to call us ‘stockholders’ when we are not by any stretch of the imagination being treated as such. We are treated less than dirt by the Cojuangcos even if it is our hard labor through the years that have brought them money. Are stockholders subjected to exploitation and abuse? Are stockholders deliberately kept in the dark and excluded from all pertinent discussions regarding how a business is run? The farmworkers have never been consulted on any business deal the Cojuangcos entered into when it comes to Hacienda Luisita. It is by own collective and determined assertion that we are able to defend our rightful claim to own the land,” he said.

Ambala secretary general and Ugnayan ng mga Manggagawa sa Agrikultura (UMA) Rodel Mesa pointed out that despite the serious miscarriage of justice in the High Court’s latest decision, they are far from being discouraged.

“We have never been naive as to think that the Supreme Court would really throw its support behind us farmworkers. It was offered the opportunity to correct the decades of injustice against us, but let us face it, the Supreme Court wants to remain in the good graces of President Aquino and his family. We have been prepared for the possibility that the decision will be against our interest, “he said.

On July 15, the Hacienda Luisita farmworkers took over some 500 hectares the Cojuangcos sold to Rizal Banking Corporation (RCBC). They cleared the land and have begun to prepare it for planting. Mesa said they intend to plant various vegetables like string beans, eggplant, tomatoes, Chinese cabbage and other quick-growing vegetables.

“It is the ideal season for planting and the land has been left idle for the longest time.
The RCBC should never have bought the land from the Cojuangcos knowing that there is a long-standing dispute. The farmworkers are the true owners, and we intend to make use of the land and make it productive,” he said.

Rowena Galang, another Ambala leader and wife of Ulwu president Rene Galang said farmworkers responded with alacrity when the bungkalan was announced. She said some 400 farmworkers are participating in the activity.

“We have set up tents to serve as our cultivation center so that we can do the planting collectively. We surveyed some 10 hectares initially and allowed every farmworker one hectare each,” she said.

Mesa said the farmworkers and their families are taking turns securing the area and have explained the situation to the guards of the RCBC stationed there.

“We do not want any trouble, we only want to exercise our rights. It is the Cojuangcos who have time and again broken the law and disregarded the law in their greed to maintain control over land that was never rightfully theirs. They put up a toll gate and allowed the SCTEx (Subic-Clark-Tarlac Expressway) to pass through the hacienda for their own financial benefit, never mind that government resources were used to build the infrastructure. They leased hectares to various corporations and business establishments and every single hectare is government land and should have been turned over to the farmworkers long before. Now we are using the land for its correct and rightful purpose,” he said.