Human Rights Watch noted that while the public rhetoric of senior military officers has changed somewhat since Aquino took office, the change in language “has not yet been reflected in action.”

In a recent report titled “‘No Justice Just Adds to the Pain’: Killings, Disappearances, and Impunity in the Philippines,” New York-based Human Rights Watch said the Philippine government’s failure to investigate cases of extrajudicial killings and prosecute its perpetrators result in more military abuses.

Contrary to the denials of officials of the Armed Forces of the Philippines (AFP) regarding the involvement of state security forces in human rights abuses, Human Rights Watch’s 98-page report details ‘strong evidence of military involvement’ in seven killings and three enforced disappearances of leftist activists since Aquino took office.

“Activists are being gunned down in the streets, while implicated soldiers walk free,” said Elaine Pearson, deputy Asia director at Human Rights Watch. “The Philippines can only bring an end to these horrific abuses if it is clear that anyone who orders or commits them will be jailed and their military careers will be over.”

Human Rights Watch called on Aquino to fulfill his campaign pledge to end serious violations of human rights in the Philippines by directing the police and the National Bureau of Investigation (NBI) to vigorously pursue crimes allegedly committed by the military or they be subjected to disciplinary measures. “The military should conduct transparent internal investigations and discipline officers and soldiers responsible for extrajudicial killings and enforced disappearances, including under principles of command responsibility,” the group said. 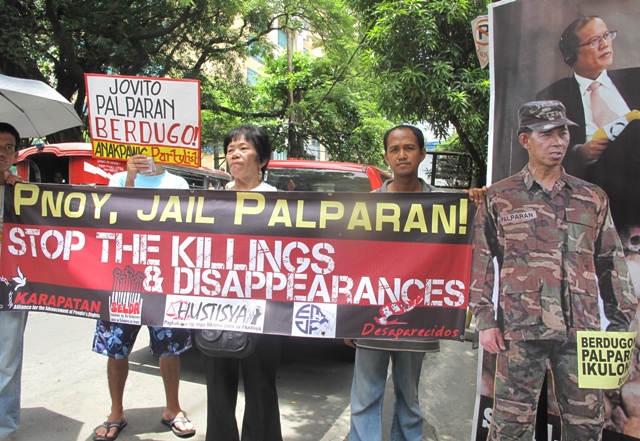 In a separate report, the Amnesty International stated, “In the past year, President Aquino has made many assertions about his administration’s commitment to human rights protection. But these verbal statements have not brought justice for victims of serious human rights violations such as enforced disappearances, torture and political killings. Nor have President Aquino’s remarks ensured the prosecution of a single military or civilian official for human rights violations.”

Human Rights Watch said the government has failed to effectively investigate and prosecute the killings and enforced disappearances perpetrated during the last decade.

“Neither has it held accountable those responsible for the most recent abuses. Only seven extrajudicial killing cases have been successfully prosecuted in the past decade, resulting in the conviction of 12 defendants, none since Aquino took office,” the group revealed.

Human Rights Watch noted, however, that there has not been a single conviction of anyone who was an active member of the military at the time of the killing. “No senior military officers have been convicted either for direct involvement in these violations or as a matter of command responsibility,” the group said.

The group has documented seven extrajudicial killings implicating the military and three enforced disappearances of leftist activists since Aquino took office. It revealed that several of the victims were killed or abducted in front of witnesses, either when armed men entered the victim’s property and shot the person in cold blood, or shot the victim from a motorbike. Some attackers wore civilian clothes and covered their faces, while others wore military uniforms and made no attempt to hide their identities. In several cases there is evidence that soldiers worked with members of paramilitary forces – primarily the Citizen Armed Force Geographical Units (CAFGUs) – or paid military “assets,” including “rebel returnees,” former members of the rebel group.

Human Rights Watch said a former soldier confessed that military commanders had ordered him to kill leftist activists and to hide or burn the bodies. The soldier said the military had trained him and other soldiers to make targeted killings look like the work of the rebel group’s Special Partisan Unit (SPARU) by using .45 caliber pistols.

“The brazen nature of some of these abuses – in broad daylight and in front of witnesses – shows how members of the military can kill and ‘disappear’ people with little regard for the consequences,” Pearson said.

Human Rights Watch noted that while the public rhetoric of senior military officers has changed somewhat since Aquino took office, the change in language “has not yet been reflected in action.”

In particular, the group said that the military inspector general and the provost marshal, tasked with investigating soldiers and officers for administrative violations, have not investigated any member of the armed forces or paramilitary forces for alleged involvement in extrajudicial killings or enforced disappearances.

Human Rights Watch wrote to the AFP requesting clarification on the issue but the letter remained unanswered by the time of the report’s release.

The group claimed that police routinely avoid pursuing evidence of military involvement, citing the case of Benjamin Bayles, a human rights worker killed in Negros. After the incident, the police arrested the perpetrators who were identified as members of the 61st Infantry Battalion of the Philippine Army. The next day, the police denied that the suspects are connected to the military.

The creation of task forces to investigate cases of extrajudicial killings “appears to be little more than a public relations exercise,” Human Rights Watch said.

Human Rights Watch also expressed alarm at how military units operating in conflict-affected areas often consider all leftist organizations to be fronts for the rebel group and anyone who opposes the military presence to be members of the New People’s Army (NPA). “In addressing these insurgencies, the government should respect its legal obligations under international human rights and humanitarian law,” Human Rights Watch said.

“Tagging someone as a leftist activist is like sounding the alarm that they are on a military hit list,” Pearson said.