Behind the scene photos of Philippine cinema’s greatest films

MANILA — Travel back in time when Tagalog films were almost always great and make it a three-decade trip via Mula sa mga aninong gumagalaw: behind the scenes 1971-2001 by noted University of the Philippines Fine Arts professor Cesar Hernando at the Cultural Center of the Philippines’ Bulwagang Fernando Amorsolo.

Mula sa mga aninong gumagalaw is a collection of 30 photographs taken behind the scenes of some of the country’s greatest films from 1971 to 2001 where Hernando worked either as a production designer or art director. The photo exhibit will run until August 28.

Easily, one is mesmerized at the sight of these behind the scenes collection, which features portraits of some of the most gorgeous faces in Philippine cinema captured beautifully by Hernando.

Case in point, the colored portrait of Vilma Santos at the center of the gallery from the Maryo J. Delos Reyes classic Tagos ng Dugo (1987) is definitely eye-catching. Two other photos of Santos are featured in the exhibit, from the set of the critically-acclaimed political classic, Mike de Leon’s Sister Stella L. 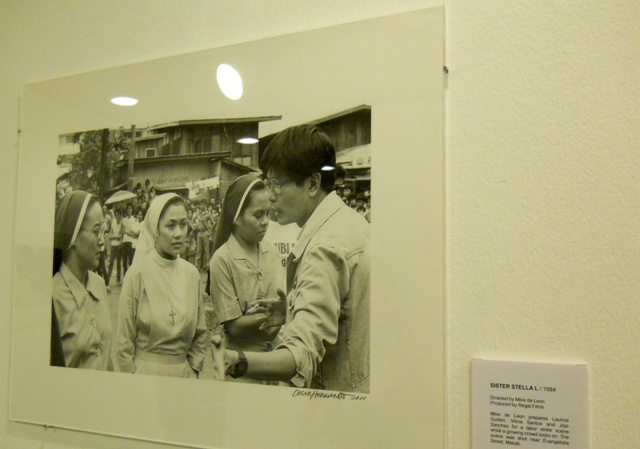 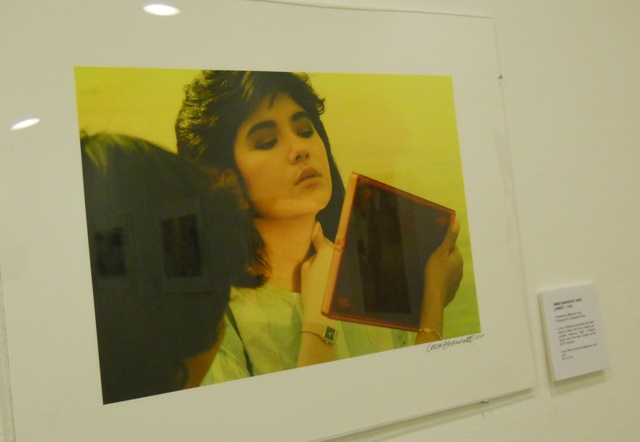 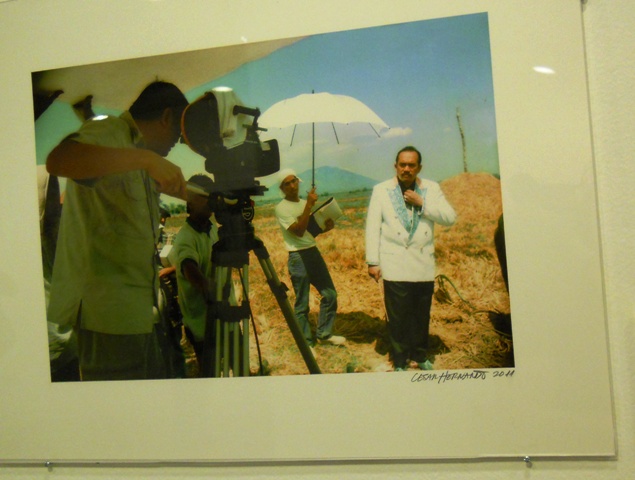 Lorna Tolentino, Hilda Koronel and Bing Pimentel are also among the beauties framed on the wall.

And then again, beauty does not come in the female form alone. Some of the most admired film actors in the country are also featured in the exhibit: Johnny Delgado in Aliwan Paradise (1992), Eddie Garcia in Pagdating sa Dulo (1971), Mark Gil in Batch 81(1982), Christopher de Leon in Kung Mangarap ka’t Magising (1977) and Yul Servo in Batang West Side (2001)are among them.

Nostalgia has never been this beautiful, actually.

The collection elicits happiness among its audience as it also highlights moments in the production sets where the actors are caught having fun with the crew, playing around or even enjoying other things not necessarily related to the production.

One such photo is that of an actor making faces while holding a daily in Kisapmata (1981). The same frame is actually a part of a very intense sequence in the movie. Another photo has Julio Diaz posing with his “amputated legs” in one of his films while one has Servo all smiles before a take in Batang West Side.

Happiness indeed was in the air during the exhibit’s opening graced by Hernando’s friends and some of the thespians in the photos like Ronnie Lazaro, Servo and yes, even the “star for all seasons,” Vilma Santos herself.

However, one has to see the exhibit to experience this happiness. More importantly, these photographs are never before seen and are considered treasures, in the real sense of the word.

Hernando, a University of Santo Tomas Fine Arts graduate, started as an as assistant director to National Artist Ishmael Bernal for Pagdating…

Since then, he has emerged into one of Philippine cinema’s respected figures, winning awards for his designs in films like Kisapmata and Tagos ng Dugo, among others. He has also worked with some of the best directors in the independent cinema like Raymond Red in Bayani (1993) and Lav Diaz in Batang West Side.