MANILA – The Alyansa ng mga Mangagawang Bukid sa Hacienda Luisita (AMBALA) through its counsel Jobert Pahilga of the Sentro para sa Tunay na Repormang Agraryo (Sentra) filed a motion for reconsideration, July 20, on the Supreme Court decision ordering the Department of Agrarian Reform to hold a referendum in Hacienda Luisita and allow the farmers to choose between owning shares of stocks or land parcels.

In asking the SC to reverse its decision, the Ambala said, “there is no reason for the Court to declare that the Stock Distribution Option Agreement (SDOA) was not revoked and that it was only the Stock Distribution Plan (SDP) and Presidential Agrarian Reform Council (PARC) resolution approving it that was cancelled.”

The Ambala said the SC’s decision was ” not in accord with logic, fairness, justice and equity” and should be reconsidered. It said that ordering the farmworkers to choose whether to remain as stockholders of HLI or to opt for land distribution would result to inequity and prejudice to their own welfare.

“If ever the farmworkers received anything, it was the product of their blood and sweat and those were mere compensation for their labor that made the land productive.” 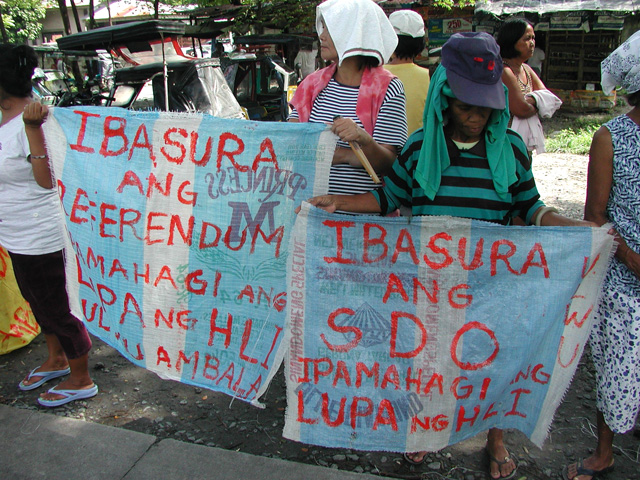 Farmworkers in Hacienda Luisita are opposed to the referendum ordered by the Supreme Court. Their lawyer Jobert Pahilga recently filed a motion for reconsideration at the SC. The Alyansa ng mga Mangagawang Bukid sa Hacienda Luisita (AMBALA) is also calling on the SC to reverse its ruling on the stock distribution.(Photo by Pia Montalban / bulatlat.com)

“The very reason why the farmworkers petitioned to revoke the SDO of Hacienda Luisita was the fact that instead of the envisioned better lives under the said scheme, their living conditions worsened. The farm workers were not given any dividend. They remained the minority stockholders. They have no control over the use and disposition of the assets of the corporation including the land. They have no say in the corporate business ventures. Their hours of work were dictated by the corporation. In short, they were at the mercy of HLI,” it said.

Pahilga said there was no no room for the application of the equity jurisdiction of the Supreme Court because Section 31 of the Comprehensive Agrarian Reform Law categorically provides for direct land distribution in the event a stock distribution is not completed.

In any case, Pahilga said, even if it’s assumed that equity would be applied, then it should be applied in favor of the farmworker-beneficiaries (FWBs) by ordering direct land distribution.

“This is the inequity that continues to fester – that the FWBs who have been promised ownership of the lands they till are denied the same, 23 years after the passage of CARL,” he said.

The Constitution and land reform

Pahilga said the 1987 Constitution is clear on the matter that only the farmers or landless regular farmworkers can collectively own the lands they till, and that this collective ownership can be exercised through a farmers cooperative or association wholly owned by the farmers themselves.

He said the law does not provide that the farmers or regular farmworkers who are landless can own the land together with other persons much more the original landowner who does not till the same. This, he said, is what makes the SC’s decision highly flawed when it ordered a referendum and acknowledged the possibility of the farmworkers continuing to “share” the land jointly with the Cojuangcos.

Farmers groups have long been fighting against the CARL and the absence of a genuine agrarian reform program in the country. In his motion, Pahilga also said Section 31 of the CARL does not give the farmers ownership of land but corporations, such as in the case of Hacienda Luisita.

“Although farmers can purchase the agricultural land of corporations, they do not become the owners thereof but the corporation. The land becomes mere investment of the farmers and it will be owned by the corporation. The farmers will only be given shares of stocks equivalent to the value of their land. There is no assurance, contrary to the pronouncement of the majority of the members of the Honorable Court, that after the dissolution and liquidation of the corporation, the agricultural lands contributed by the farmers will be returned to them. This will violate the trust fund doctrine,” he explained.

“The farmers, as stockholders, are subject to the power of the Board.The farmers will own only an aliquot part of the corporate asset and their ownership is only to the extent of the value of the agricultural lands they bought from the corporate landowner. Under such an instance, the farmers will lose control of the land. And it will be the corporation through the board that will have the power to dispose the same or regulate its use.”

Pahilga said this situation cannot be remedied and corrected by the simple expedient of the Department of Agrarian Reform (DAR) and Presidential Agrarian Reform Council (PARC) seeing to it the farmers should always own majority of the common shares of the corporation.

“This should be obvious because the farmers’ shares will depend on the value of the agricultural lands that the corporation will sell to them,” he said. Making the farmworkers as stockholders in the HLI, he said, is only a ploy to deny them direct and collective ownership of the land.

The peasant rights advocate went on to say that agrarian reform is first and foremost a social justice and equity question before it is a business proposition. Agrarian reform, he said, aims to no less than effect the transfer of ownership and control of the land to the direct producers, the farmers or farmworkers.