MANILA –Lelly Montoya, 56, shook her head when she compared the dramatic change that has happened to the Philippine Orthopaedic Center (POC). Years ago, her son was confined and treated at the POC for tuberculosis of the bone– she said the hospital did not make her poorer for all the health services her son had received. Nowadays though, after bringing in another patient, she described the hospital as more of a “semi-private.” While listening to the speeches of health workers during the protest action in front of the POC last week, she asked at first why the health workers were protesting privatization, “when it seemed the hospital is already functioning like a private institution.”

Montoya was part of a crowd made up of either “watchers” (persons who stay with patients to assist them) or patients themselves who later agreed with the protesting members of the National Orthopaedic Hospital Workers’ Union that rather than complete the privatization of the hospital, “its budget should not have been cut and the rate increases should not have been allowed.” Some of the patients and watchers joined the picket. 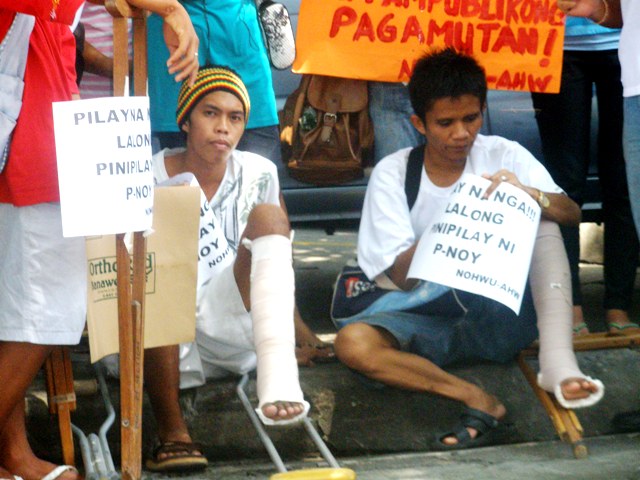 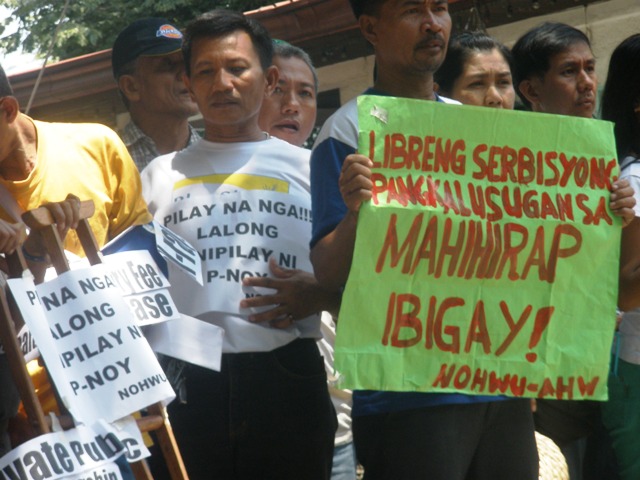 Patients, ‘watchers’ of patients and health workers urged the government not to proceed with the Phil. Orthopedic Center’s rate increases and privatization.(Photos by Marya Salamat / bulatlat.com)

Since March this year, the health workers in POC have been protesting the drastic increases in rates being charged by the hospital. The cost of x-ray, for example, has more than doubled since March from P120 to P250 ($2.79 to $5.81), under the income generation or revenue enhancement program of the POC. Cost of other radiologic procedures and laboratory examinations like complete blood count and blood cross-matching also increased from 30 percent to 60 percent. All out-patient payment fees, even the cost of operating room charts and physical therapy, have also increased since March.

The increases reportedly came about as the hospital struggled to make up for its reduced budget. The POC’s budget was slashed by President Aquino from P101.7million ($2.4 million) last year to P90.7 million ($2.1 million) this year.

“Following years of continued budget cutbacks, where (else) would the hospital get the needed budget but from its patients?” asked Wilfred Mallari, president of the hospital workers’ union. He said “prices of everything in Philippine Orthopaedic Center (POC) have increased.” And services that used to be free are now being charged fees. “Now, it’s only the checkup that is free,” Mallari said.

If the government policy of privatization under public-private partnerships and rates increases in public hospitals is not reversed, the health workers from the Alliance of Health Workers (AHW) warned that low-income Filipinos, or majority of the population, would find it very costly to get themselves mended should any of their bones got broken in the future.

Another watcher, Rosario Bundalian, 65, said things are tough for them already at the POC. She brought her 35-year old son to POC more than a month ago after her son fell off a fruit tree and he had trouble moving his arms and legs as a result. “I thought we would not be charged too much here because it is a government hospital, but as it is turning out, everything is being charged a fee.”

Her son is married with children, Rosario said. They had sold his tricycle, his means of livelihood, so he could get his operation. He remains in the spinal ward up to this writing, while his mother gets more and more worried about how to continue paying for his treatment. On top of that, she said the family her son left behind in Pampanga has to survive while her son remains hospitalized.

More patients like him, of working age, have been coming to the Philippine Orthopedic Center for treatment due to various accidents.

Government retreat from responsibilities in health.

Every year since the administration of former president Fidel V. Ramos (and the beginning of the implementation of Health Sector Reform Agenda), the budgets for public hospitals have consistently been slashed. By 2014, Mallari warned that more operations of public hospitals would cease to get a budget from the government, and by 2020, not even their maintenance and operating expenses would be budgeted. This means that the government is expecting public hospitals to raise its income to finance itself, through PPPs, and become true government-owned or operated corporations.

In the case of the now dilapidated POC, Mallari said, there are plans to construct a new twin tower to house the present hospital and some commercial and private clinics, laboratories and other establishments. He told bulatlat.com that the increases in current charges are also its way of attracting private investors into the Philippine Orthopedic Center.

Because of its shrunken budget, like other public hospitals some hospital worker benefits are also not being implemented in POC even if these are already mandated by law. Mallari said that while they are receiving their hazard pay and “updated SSL-3” (Salary Standardization Law-3), they haven’t received their cost of living allowance for 10 years now, and they are being made to choose between two benefits that, by law, should have been both given to them. These are their “step increment” (where they should receive a certain percentage increase in salary after three years in service without a promotion) and longevity pay (where they should also receive a certain percentage of increase in pay if they have added five years of service to their employment record).
Mallari said employees in their mother unit, the health department, are receiving both.

Ricardo Antonio, vice-president of the workers union in POC, also noted an alarming trend that is causing the dwindling number of regular, unionized health workers. “Every time someone retires, their positions are removed,” he said, explaining that their workforce used to count 1,200. They are now down to just a thousand workforce.

But considering that the population continues to increase, as well as the number of the poor, the number of patients coming to POC has not been decreasing. Thus, Antonio said, they have “more intense workloads” now, especially the nurses who call their hours of duty as “one-to-sawa” (literally starting from hour one up to the hour one can endure).

The two union leaders also said there are contractual employees in POC whose continued stay in the job depends on the Department of Budget and Management. By utilizing the services of these “no-work-no-pay contractuals,” the government is cutting on costs but violating labor standards, the union leaders noted.

Public hospitals up for grabs 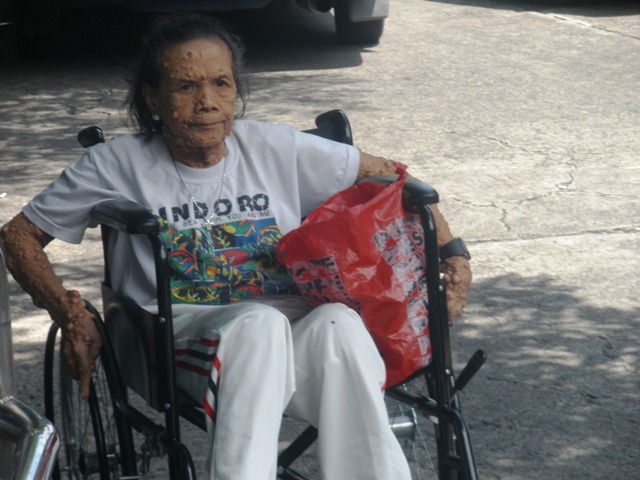 “How can we take care of our crippled patients if we ourselves are being crippled?” asked the health workers in POC during their lunch time picket protests last week. The picket was held also in preparation for joining the State of the Nation (SONA) protests on July 25.

The health workers challenged President Aquino to be true to his claim that the people are his “boss.” If that is indeed so, the POC workers union said in a statement, then Aquino “should have allotted more budget for health and did not implement privatization of health services in any form.”

The Philippine Orthopedic Center is one of the government hospitals up for public-private partnerships (PPP) that President Benigno “Noynoy” Aquino proudly talked about in his first state of the nation address. Other hospitals include San Lazaro Hospital in Manila, the Research Institute for Tropical Medicine (RITM) in Alabang, Western Visayas Sanitarium in Iloilo and Eversley Child’s Sanitarium in Cebu.

With the POC workers union were other members of the Alliance of Health Workers, the Health Alliance for Democracy, and Community Medicine (Commed), whose leaders urged the health workers, patients and watchers to join the struggle against privatization.

“Privatization is not good for us,” said Dr Julie Caguiat of Commed. She said there is budget “if not for corruption and for the fact that the government is increasingly giving in to foreigners who want to extract super-profits.”