MANILA – One of the more than 300 political prisoners was released today.

After more than two years in detention, Jovencio Balweg, 61, was acquitted of charges of rebellion, murder and multiple frustrated murder. Balweg was arrested on May 18, 2009 in Camp 7, Baguio City after a check up at a hospital. At that time, he had suffered a mild stroke and was also being treated for a spine injury and hypertension.

“Other NDFP consultants and the rest of the political prisoners should also be released,” Balweg said shortly after he was freed from the Philippine National Police Custodial Center inside Camp Crame.

“Alan [Jazmines] is supposed to sit in the peace panel. He should be released before Aquino’s Sona [State of the Nation Address],” Balweg said.

The NDFP peace panel appointed Jazmines as a member of the reciprocal working committee on socio-economic reforms (RWC-SER). 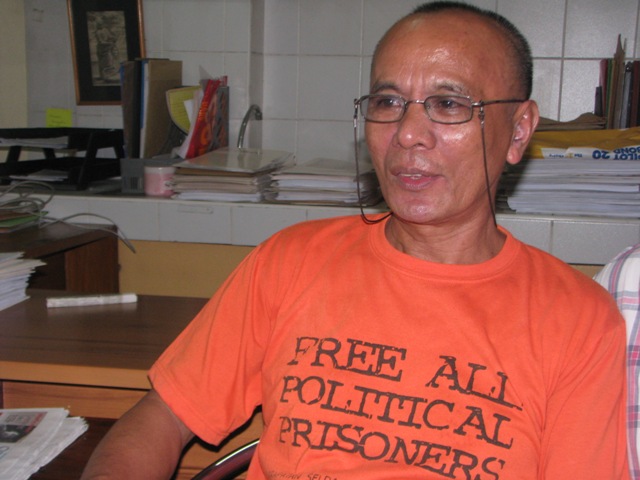 Balweg said Jazmines and other political detainees were happy about his release. They are hoping that others would follow suit.

More than 200 political prisoners in various detention cells nationwide have started their four-day fasting to dramatize their demand for general, unconditional and omnibus amnesty.

As he arrived at the Karapatan office, Balweg was welcomed by activists. Not long, he complained of dizziness. He had been fasting since 6 a.m. “We agreed to fast. That is our unity,” Balweg said, catching his breath.

While in detention, Balweg suffered another stroke, the third time. Unlike Zaldy Ampatuan, Balweg had to wait for the court order for one week before he was brought to the hospital. “It was supposed to be an emergency but they did not allow me to go to the hospital at once,” he told Bulatlat.com in an interview. In April 2010, Balweg was subjected to a triple bypass surgery.

Asked about his plans, Balweg said he would continue the fight. “My heart remains for the masses,” he said, smiling.

Balweg said that under Aquino, he has not seen any change.

The day before Balweg’s release, a former activist was arrested.

Gloria Quinones Floresca, 57, former organizer of Solidarity of Ilocos Associations of Women (Silaw), an affiliate of Gabriela-Ilocos, was arrested July 21 from her home in Naguilian, La Union.

According to Ilocos Human Rights Alliance (IHRA), Floresca was arrested in front of her four-year-old grandson. She was cooking lunch when the policemen arrived. No warrant of arrest was presented to Floresca but the latter was told that she is charged with rebellion.

Floresca was brought to Philippine National Police (PNP) regional headquarters at Camp Diego Silang in San Fernando City of the same province for medico-legal checkup. The IHRA said she was investigated by the police without a lawyer.

IHRA sent a quick reaction team to see Floresca. The police refused to provide the team a copy of the warrant of arrest.

The team obtained a copy of a press release issued by the PNP Regional Command stating that Floresca is one of the most wanted criminal elements in Region 1. The PNP accused Floresca as being the head of the finance bureau of the Ilocos Cordillera Regional Committee of the Communist Party. The press release was distributed to the local media shortly after the arrest.

The next day, Floresca was accosted by some 20 policemen to the Branch 25 Regional Trial Court in Tagudin, Ilocos Sur. After that, she was taken to Ilocos Sur Provincial Jail in Vigan City.

Based on court records obtained by IHRA, the charges against Floresca was filed by officers of the 50th Infantry Battalion, 5th Infantry Division Philippine Army.

IHRA said that since 2007, Floresca has been taking care of her grandson. She stopped her political involvement for medical reasons.

Marie Hilao-Enriquez, chairwoman of Karapatan and Selda , said the Aquino administration should fulfill its commitment to release political prisoners, especially the NDFP consultants.

“It’s not only part of confidence-building measures but it is a commitment they made during the resumption of talks last February,” Enriquez, who witnessed the talks as an observer, said.

Enriquez added that Aquino should take the opportunity to “right the wrong” by granting general, unconditional and omnibus amnesty to all political prisoners. “The Aquino government should be proactive in facilitating the releases [of political prisoners].”

In a statement sent through email, the Herminio Alfonso Command-Guerilla Front 53 Operations Command (HAC-GF53OC) of the New People’s Army in Southern Mindanao has caused the release of Dennis Rodenas as he was being escorted by personnel of the Bureau of Jail Management and Penology?(BJMP)-Ozamis City on their way to the Davao Penal Colony (Dapecol).?

?“Dennis Rodenas, like many Filipinos, is a victim of the unjust Philippine judicial system. He was arbitrarily convicted by a court of the Government of the Philippines based on patently false and?fabricated charges which were anchored on evidence planted by the Philippine Army-Armed Forces of the Philippines. He was being transported to the Dapecol to begin his unjust life sentence,” NPA spokesperson Isabel Santiago said.