“It appears that the Arroyo policy of witch-hunting, arrest, criminalization of political offenses and/or the slapping of fabricated criminal charges to silence and put behind bars human rights defenders continues to be implemented under Aquino,” Angelina Ipong, Selda spokeswoman, said.

According to Karapatan and Samahan ng Ex-Detainees Laban sa Detensyon at Aresto (Selda), there are 354 political prisoners nationwide. Majority of them were arrested during the previous administration of Gloria Macapagal-Arroyo.

“One year since the first Sona of Aquino, nothing has been done to serve justice for the illegal arrest, torture and illegal detention of the 354 political prisoners who are still languishing in jails all over the country,” Angelina Ipong, a recently released political prisoner and Selda spokeswoman, said.

Ipong added that under the Aquino administration, 45 political prisoners have been detained. “It appears that the Arroyo policy of witch-hunting, arrest, criminalization of political offenses and/or the slapping of fabricated criminal charges to silence and put behind bars human rights defenders continues to be implemented under Aquino,” Ipong said. 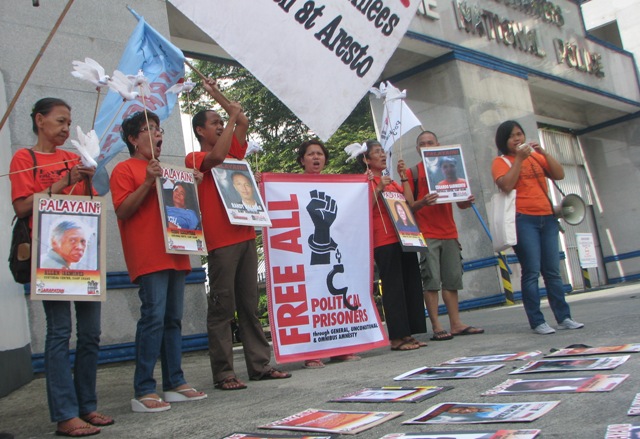 Karapatan called on Aquino to stop the implementation of his version of the counter-insurgency program now named as Oplan Bayanihan. “His version of the program is no different from the previous one; both of these entail the persecution of political dissenters that engender illegal arrests, detention and torture of political prisoners and other human rights violations,” the group said.

In support of the political prisoners, members of Selda, Karapatan, Hustisya, Desaparecidos, Tanggol Bayi held a picket rally in front of Camp Crame’s Gate 2 this morning.

“The government of Benigno S. Aquino III needs to abide by the agreement between the NDFP and the Government of the Republic of the Philippines (GPH) peace panels last February for the release of all political prisoners – most of whom are unjustly and illegally imprisoned, and whose release should be part of the confidence-building measures on the part of the Aquino government, if the peace process is to progress,” they said.

After the first round of talks, both parties signed a Joint Communique stating: “The GPH Panel agreed to work for the expeditious release of detained NDFP consultants and other Jasig- protected persons in compliance with the Joint Agreement on Safety and Immunity Guarantees (Jasig) and in the spirit of goodwill.”

Jovencio Balweg was released before noon today. The release, however, has nothing to do with the peace talks. (see separate story) 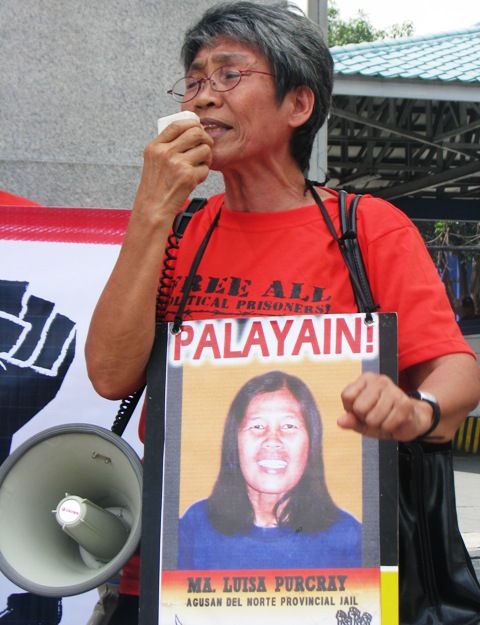 Karapatan deplored that while special treatment is accorded to rich and influential prisoners, allowing them to seek medical care in well-equipped hospitals, there are political prisoners who languish in jail for as long as 23 years or those who are equally sick who suffer in prison hospitals without proper medical attention and medicine.”

In a joint statement from NBP, political prisoners said if Aquino really wants to take the straight path, he should listen to the voice of the Filipino people.

“We are in solidarity with the Filipino people who continue to be imprisoned by poverty and who are victims of exploitation and oppression,” they said.