Worsening conditions for the Filipino worker

Majority of those employed today in the Philippines are in vulnerable or part-time work, hampering many workers’ desire to demand for a living wage. Even those in full-time work are reportedly under pressure to comply with various flexible work arrangements.

MANILA – Work is more dangerous than war — that is reportedly the conclusion of an International Labor Organization (ILO) study on global health and safety at work. The ILO study revealed that globally, at least one worker dies at work every 15 minutes. In the Philippines, a non-government occupational health and safety institute criticized the lack of concern for health and safety at work as highlighted by the deregulation of labor inspection as contained in a Department of Labor and Employment order.

The recent accidental death of a worker in the Korean-owned Hanjin in Subic, Zambales (which brought to 38 the total number of killed from work-related accidents), and the fatal fall from a Lucio Tan-owned construction site that killed 10 construction workers last January, are just some of the yearly “sacrifices” of workers in unsafe workplaces. According to Noel Colina, executive director of the non-government Institute for Occupational Health and Safety (IOHSAD), government concern and inspection only began after blood had been shed and when accidents had generated intense publicity. Otherwise, the establishments in the Philippines are ordered to perform “self-assessments” on whether they are complying or not with good occupational health and safety practices.

Most deaths and injuries from work-related accidents and lack of safety are most common in agriculture, construction, mining and manufacturing, the industries that are topping the employment targets of the Aquino administration. Even in services, accidents happen such as in Ninoy Aquino International Airport when the ceiling collapsed and injured two workers. Another incident was when nine workers were hit by lightning while working on the runway.

Despite Aquino’s promised change, though, and against the backdrop of many workers dying during his first year, it only continued the self-assessment policy began under Arroyo, noted the non-government IOHSAD.

The real number of jobless Filipinos is much higher than what is reflected in government statistics. According to Ibon, a non-government economic think-tank, the country’s jobless may reach up to 4.5 million, or nearly double the government’s estimates of 2.9 million, which is based on the “new” definition of unemployment that does not include those who had stopped actively seeking work for various reasons.

The Social Weather Stations’ survey result released last March painted a grimmer picture: it revealed that up to 11.3 million Filipinos are jobless, up from 9.9 million in November 2010. Considering that this huge number of Filipinos has no livelihood to speak of, the poor and hungry are expected to have increased in number. Yet, they seemed to have decreased after the government has revised its poverty threshold. Before, a Filipino is considered poor if he or she earns P52 ($1.21) or less per day. This was reduced to P46 ($1.07) or less per day. The revision has brought down the number of registered poor from 28.5 million to 23.1million. 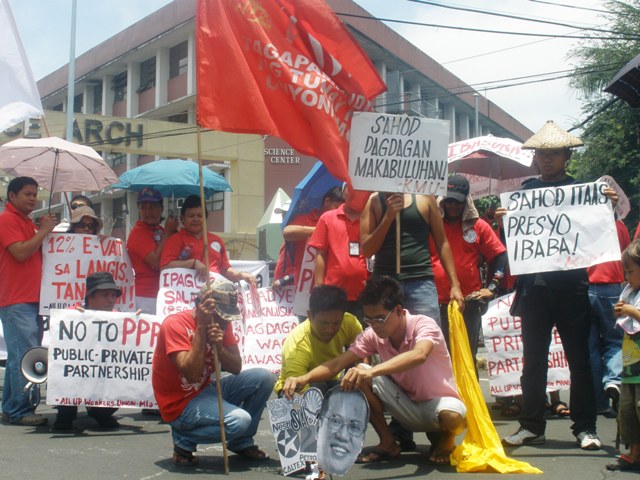 Having a job is unfortunately not an insurance against hunger, as low wage levels continue to prevail in the Philippines under Aquino despite his inaugural promise that “Filipinos can dream again.” The labor center Kilusang Mayo Uno has repeatedly slammed the Aquino government for ignoring the long-time demand for a P125 ($2.90) legislated daily wage hike.

Just before May 1 this year, the wage boards in the NCR granted a P22 ($0.51) cost of living allowance, an amount criticized as “paltry” by all labor groups in the country. This has already been the highest compared to the “wage hikes” granted in other regions. The KMU said the minimum wage plus the meager COLA do not even come close to the P988 ($22.98) living wage in the NCR.

Majority of those employed today in the Philippines are in vulnerable or part-time work, hampering many workers’ desire to demand for a living wage. Even those in full-time work are under pressure to comply with various flexible work arrangements, which the labor department has approved via department orders issued since the time of Arroyo, labor lawyer Remigio Saladero of Pro-Labor Assistance Center said in a forum assessing Aquino’s first year.

Under Aquino, the labor department issued its first department order listing guidelines on use of flexible work arrangements and exemption/elimination of the provision prohibiting night work for women employees in the BPO industry. According to Saladero, the provision is explicitly stated in the Labor Code, which recognizes and respects the mother’s duties to be home at night. But under the globalization’s thrust of allowing women to work at night, Saladero said, the Labor department issued the order.

He added that this particular department order also allows companies “to use different ways to implement flexible work arrangements, such as “flexi-time,” “flexi-holiday schedule” (where companies can freely move the date of observing a non-working holiday), compressed work week (where one’s maximum working hours of 48 a week are divided into just three or four days, without night-time differential or overtime pay).

Aquino has promised change, but his first year showed only the continuation and worsening of the past administration’s thrusts, said the labor center KMU. Based on the documentation of the Center for Trade Union and Human Rights (CTUHR), cases of violence in picketlines during Aquino’s first year in power was even worse than those recorded under Arroyo during her administration’s first year. The recorded incidences of violence in picketlines are nearly six times more than Arroyo’s, said the CTUHR report.

It also noted that the filing of trumped-up charges against progressive leaders, activists and lawyers is being revived now under Aquino.

Union busting seems to be more prevalent under the current administration. Based on CTUHR’s documentation, employers are found to have been “flagrantly interfering” in union matters, resulting in at least 75 new cases of trade union rights violations this year.

In just a year of the Aquino administration, prices of most basic goods from foodstuff to electricity, water, tuition fees, toll/road fees, transport fares and oil products have increased, and yet, against the people’s cries for relief, it has responded only with a “meager” COLA of P22 in NCR, “doubtful doleouts” such as the conditional cash transfers, and “very limited stop-gap measures” such as the Pantawid Pasada cards it gave to public utility drivers in lieu of regulating oil prices or shelving the 12-percent value added tax on oil.

The labor center KMU and the urban poor group Kadamay have protested the doubling of Philhealth contributions of certain groups of Philhealth members. And this month, the Department of Finance through Secretary Cesar Purisima announced that the department will focus on the self-employed sector and professionals as “sources of more tax collections” of up to P340 billion ($7.9 billion).

According to the January 2011 Labor Force Survey (LFS), self-employed workers without any paid employee composed 30.4 percent of the total employed workers.

“It is simply callous and opportunistic for the Aquino government to tax poor vendors, jeepney barkers, sari-sari store owners, and others in similar employment status. Callous because it shows a lack of understanding that they only raise a meager income. Opportunistic because it aims to raise tax collection from people it hardly supports,” said Lito Ustarez, KMU vice-chairperson.

“This proposal to hike taxes on the self-employed shows that the Aquino government favors big foreign and local capitalists above the Filipino people,” said Ustarez. The labor group urged the Department of Finance to remove instead the tax holidays for big foreign and local capitalists, to zero in on big tax evaders, and to “stop milking professionals and the self-employed dry.”

With other peoples organizations, the workers’ organizations have asked President Aquino to “tell the truth about the state of the nation.” It said the working people are being bled dry by unmitigated price increases, taxes, penalties and fees (for drivers) that are not corrected by wage adjustments. The labor sector is pushing Aquino to allow them nearer Batasan on July 25.

“If the president intends to tell the truth about the state of the nation and if he intends to push for pro-worker and pro-people policies, he does not need to fear protesters going near the Batasang Pambansa,” Ustarez said.