Theodore Te, lawyer and an advocate of freedom of information, noted that in the Aquino administration’s version of the Freedom of Information bill exceptions are longer than the list of information subject to mandatory disclosure.

MANILA — Groups advocating for the passage of a freedom of information law have been waiting for 15 years already but they would not settle for the Aquino administration’s version of the bill, which ironically, turns out to be more restrictive.

In a policy forum organized by the Center for Media Freedom and Responsibility (CMFR), journalists and other advocates expressed dismay at the dilly-dallying of President Benigno S. Aquino III on the freedom of information (FOI) bill and criticized the proposals of the executive, as articulated by Manuel Quezon III, undersecretary of the Presidential Communications Development and Strategic Planning Office.

Several FOI bills have been filed in the House of Representatives and the Senate. Aquino tasked a study group to review it and come up with proposals. A draft is being worked on by the said team in consultation with various stakeholders, Quezon said.

Quezon admitted there are stumbling blocks to the passage of the FOI bill. On the other hand, Luis Tedoro, CMFR deputy director, could not accept the administration’s counter proposal, saying, “I feel that if the administration bill is passed, access to information may ironically be curtailed. If the admin bill gets passed, the FOI law may be one of those laws that are supposed to protect people’s rights but in actuality, do not.”

Advocates noted that Aquino did not mention FOI in his second State of the Nation Address (Sona) last Monday.

Malou Mangahas, executive director of PCIJ, said Aquino voted for the FOI bill when he was still a senator, and promised to push for an FOI law when he was still a presidential candidate. “In policy, Aquino and company [say they] support FOI but there are some concerns or is this an excuse?” Mangahas said, addressing Quezon.

In response, Quezon said Aquino wants the FOI bill to be passed, though there were concerns. He said that Aquino consulted with all sectors regarding the FOI legislation.

“PNoy asked me personally last Monday regarding the developments in the FOI discussion. He asked me about the next steps to be undertaken,” Quezon said. 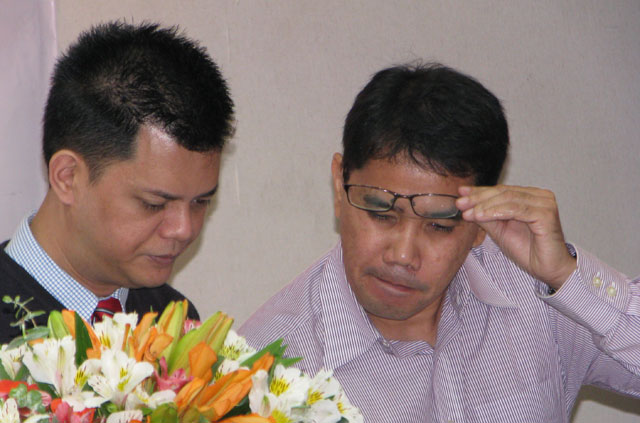 Mangahas said, “Since there is no signal coming from Aquino, the head of the Liberal party, Congress is sitting on the FOI legislation. The Congress is the battleground.”

“The Philippines proclaims that it is an open government, and it values transparency. Yet among four benchmarks on the openness of a government and its transparency, the Aquino administration is failing on two. Is this doublespeak?” Mangahas asked.

Quezon denied that the Aquino government is engaging in doublespeak. “The progress of the case is not as fast as you want. Rightly or wrongly, that is the way PNoy handles things… In government, the process [should be] thorough and exhaustive,” said Quezon.

Mangahas said that while Aquino certified as urgent the bill on whistleblowers’ protection, he did not mention in his Sona the need for an FOI law, which, she said, is a premise, predicate law.

Like Mangahas, Nepomuceno Malaluan, lead convenor of Right to Know, Right Now Network, share the same doubt. “We are unclear about the signal from the chief executive. Is he committed in passing the FOI bill?”

Malaluan said the President’s concerns are political and administrative in nature. “We heard there are concerns by the President that it will be used by the enemies of the righteous path. It is seen as a destructive measure. We hope that this is not true.”

“PNoy told us we are the boss, but on FOI, he’s saying ‘you wait until I’m ready,’” Mangahas said.

Malaluan, who sat down with the Malacanang study group on several dialogues, disclosed that the Palace wants initial changes on the bill filed by Rep. Erin Tañada (fourth district, Quezon) on deliberative process privilege, removal of criminal liability, expanding exceptions, among others. 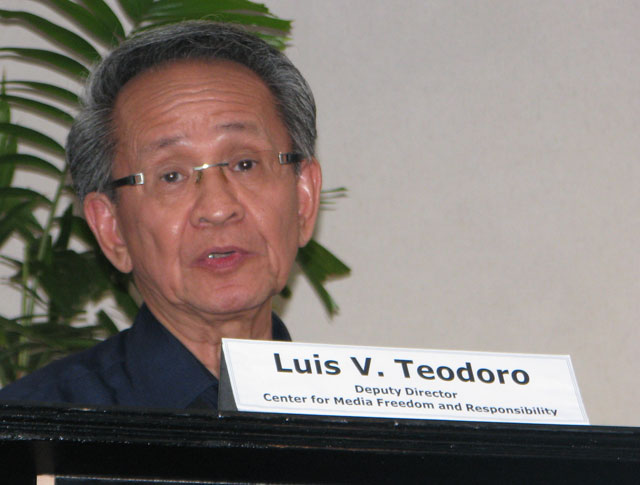 Luis Teodoro, CMFR deputy director, lashes out at the administration’s version of the bill. (Photo by Ronalyn V. Olea / bulatlat.com)

“National security should not be used as a catch-all phrase to evading release of information, especially because of the intelligence community’s antipathy to human rights, its policy has always been antithetical to citizen participation,” Teodoro said.

Quezon said another concern was there should be protection of personal privacy. The FOI law should be in harmony with other laws on privacy, he said.

Quezon said Aquino is also concerned with the executive communications privilege, saying that “frank and candid deliberations during meetings” may be affected. He said that during the deliberation of policies, information may not be disclosed. Only after the policy has been made can information be made available to the public.

“Executive communications privilege remains inviolable for the chief executive,” Quezon said, citing as example commercial/financial information that should be protected if it ‘would prejudice government’s ability to transact business.’

Teodoro criticized the removal of public interest override in executive privilege. Theodore Te, lawyer and freedom of information advocate, noted that in the Aquino administration’s version of the bill, exceptions are longer than the list of information subject to mandatory disclosure. 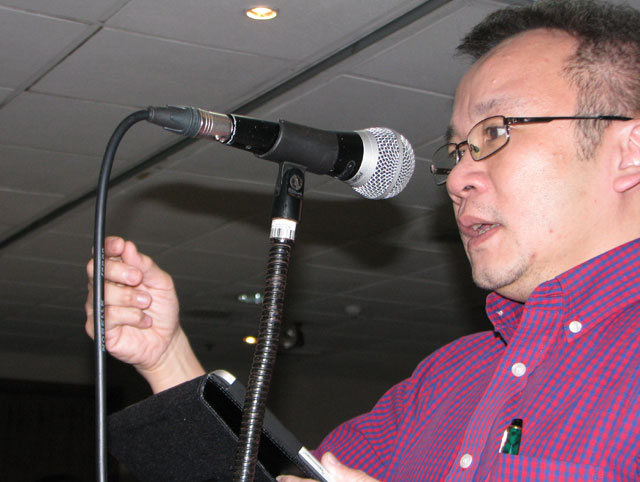 Theodore Te of University of the Philippines says exceptions are longer than the list of information subject to mandatory disclosure. (Photo by Ronalyn V. Olea / bulatlat.com)

“It is very ironic that the bill supposedly enhances liberty but actually diminishes it,” Te said, referring to the administration’s version. “You cannot have a bill that has so many restrictions.”

Bayan Muna Rep. Teddy Casiño who also authored a version of FOI bill criticized the administration’s long list of exceptions, saying these can be easily invoked by government agencies to justify denial of access.

“Exceptions are bit numerous. Application of these exceptions from the administration’s version of the bill already hinders the public from getting information,” Casiño said.

Casiño added that based on the draft, the Aquino administration seems to have a “paranoid mindset.”

Teodoro said an FOI regime should have the following features: maximum disclosure, obligation to publish, promotion of openness and limited scope of exceptions.

Te said limitations should be strictly construed. “Burden of proof is on the person trying to deny access,” he said.

Malaluan said the executive also wants to delete criminal liability for those who will violate the FOI law.

Advocates also raised questions on the creation of an Information Commission.

For Casiño, it is but an additional process. Malaluan said it is the most viable body to resolve problems on access to information. Teodoro sensed danger if the Commission is allowed to rule on legitimacy of requests and to impose a temporary or permanent ban on release of information.

“The Information Commission is also problematic. If its members are to be appointed by the President, then it would be part of the Office of the President,” Teodoro said.

For Te, to address the issue of independence, the appointing power on the proposed Information Commission members should be guided by inputs from civil society or FOI advocates. He added that the role of the Commission should be defined more clearly, including composition of members.

Tañada is optimistic that the bill will be enacted into law. Advocates, meanwhile, could not settle for less. As Teodoro said, if the administration’s version would be adopted, FOI advocates should reject and condemn the passage of the bill.