LAGAWE, Ifugao – A human rights group expressed its highest recognition and deepest gratitude to lawyer Reynaldo Cortes for his staunch and unwavering commitment to the defense and advancement of human rights.

In a surprise and simple ceremony during the first day of their third congress on July 28, the Cordillera Human Rights Alliance (CHRA) awarded Cortes a gong as a symbol of recognition to his unparalleled contribution to the movement for respect of human rights.

Katribu President Beverly Longid explained that the gong in the Cordillera culture is usually among the things that are passed on from generation to generation. She added that it is a symbol of bravery.

Longid reiterated that like the gong, Cortes’ shining example of selfless service and firm commitment to the fight for human rights is something that should be passed on to the younger lawyers, paralegals and human rights workers.

In her presentation of the award, Longid pointed out that Cortes has been serving victims of human rights violations and has been instrumental to the advancement of the human rights movement for the past three decades. She added that in the dark years of martial law, Cortes showed the importance of defending human rights in the face of fascism.

“This is to recognize your wisdom and courage in defending those whose rights are violated because of their political beliefs inside and outside of the courts of justice… Also to show our heartfelt gratitude for your patience to go to far flung communities bearing the brunt of militarization and for scouring the trial courts all over the region and beyond to personally attend to cases even at times when you would travel alone,” Longid said in Iloko.

Cortes has been a human rights lawyer since he graduated in 1967 from Law at the Ateneo de Manila University and remains to be one of the few in Northern Luzon. He is the chairman of CHRA and the Free Legal Assistance Group-Northern Luzon (FLAG-NL). 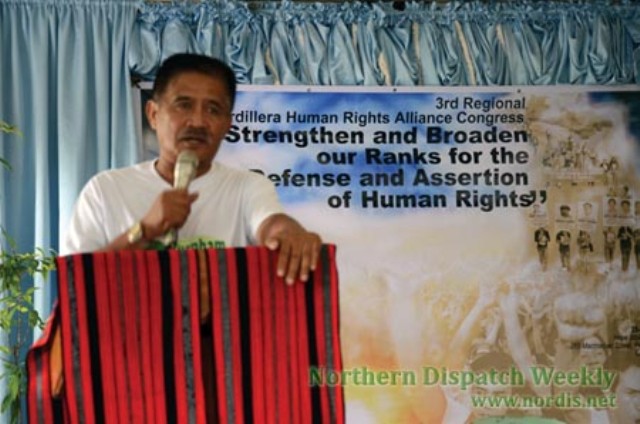 In his acceptance speech, Cortes admitted he was overwhelmed by the award. He also reiterated that he was not alone in the fight for the respect of human rights. “I could have not done it alone. There were other lawyers,” he said.

He also pointed out that there are younger lawyers who already took on the challenge of defending the oppressed and human rights. He cited as example lawyer Mariano Buyagawon from Ifugao who took on the case of four youth accused of being New People’s Army guerrillas.

In a statement, the National Union of Peoples Lawyers (NUPL) also commended Cortes for his service to the people.

“The National Union of Peoples’ Lawyers – an association of human rights lawyers in the Philippines, committed to the defense, protection, and promotion of human rights, especially of the poor and the oppressed – salutes our esteemed colleague Atty. Reynaldo A. Cortes for his service to the people, on the occasion of his recognition by the Cordillera Human Rights Alliance (CHRA),” the statement read.

NUPL described Cortes as an exceptional lawyer who offers his services pro bono for the peasants, workers, indigenous peoples, women and the like. His talent and skill has set free many political prisoners and prevented the incarceration of several activists and innocent civilians.
Recently, political prisoner Jovencio Balweg was acquitted of the charges of rebellion, murder and multiple frustrated murder which, thereafter, led to his release; this was no less than due to the efforts of Cortes.

He has continuously handled cases in defense of those whose political and civil rights have been violated and trampled upon. He was lead counsel in the Abra 14 case, where the military falsely and maliciously accused 14 lay and clergy development workers from Ilocos with the death of Conrado Balweg in 1999. The case ran from 2000 to 2007 where one-by-one, the court would later acquit or dismiss the charges against the 14 for lack of evidence.

He served as counsel in the landmark case of writ of amparo in favour of James Balao where then President Gloria Macapagal-Arroyo was not dropped as respondent.

NUPL also pointed out Cortes’ active role in the campaign to stop impunity and to fight human rights violations. In fact, his commitment to the cause of human rights has earned him the ire of the military but he also touched the lives of many more. He is the founding convenor of the Cordillera Human Rights Organization (CHRO), the forerunner of the CHRA.

He is a convenor of the Taripnong para iti Kappia (Gathering for Peace) and Stop the Killings network. He is also a founding member of what is now the single biggest network of human rights lawyers in the country, the NUPL, and of the Philippine chapter of the anti-imperialist formation of progressive lawyers, the International Association of People’s Lawyers (IAPL).

NUPL views Cortes’ recognition not just as an individual award but an appreciation of the collective efforts of human rights lawyers in the struggle for justice and against impunity.

“The award is also a fitting reminder for him and other human rights lawyers that their efforts and sacrifices do not remain unnoticed or unappreciated. It is also an inspiration for other lawyer-advocates to emulate his work and dedication to the cause of freedom, democracy and human rights. While not enough to recompense the contributions of Rene, this recognition ought to be a gesture for him to continue to stand and fight for the cause of the poor, the oppressed and the exploited. Thank you Rene and carry on the struggle!” NUPL said.