Off with his head!

Or at least boycott his exhibit.

Artist Mideo Cruz is now at the eye of one of the biggest controversies in the Philippine visual arts scene. His latest work “Poleteismo” is being vilified left and right by various religious groups and influential leaders, and an ABS-CBN reporter has even come out with a column suggesting that he, Cruz, should be forced to drink muriatic acid.

Cruz’ “Poleteismo” is part of the exhibit “KULÔ”, group exhibition at the Cultural Center of the Philippines (CCP) Main Gallery showing until August 21, 2011. It was launched on June 17 on the occasion of CCP’s celebration of Jose Rizal’s 150th birthday.
TV Patrol’s Mark Logan in his column in the tabloid Abante said many were incensed when they saw the TV Patrol report on Cruz and his exhibition. Logan suggested that those who were angered by how Cruz put together his installation art and murals depicting – among many other concepts — religious icons should kill Cruz.

“Don’t you have pity for this person? Just because he put black tears on the face of Jesus Christ. Will you beat him up when you see him? Stab him, strangle him or push him into a creek? But before this, will you make him drink muriatic acid and then have him shot by a motorcycle-riding tandem? It’s too much! Don’t you have any respect for someone like him who’s an ‘artist’?” 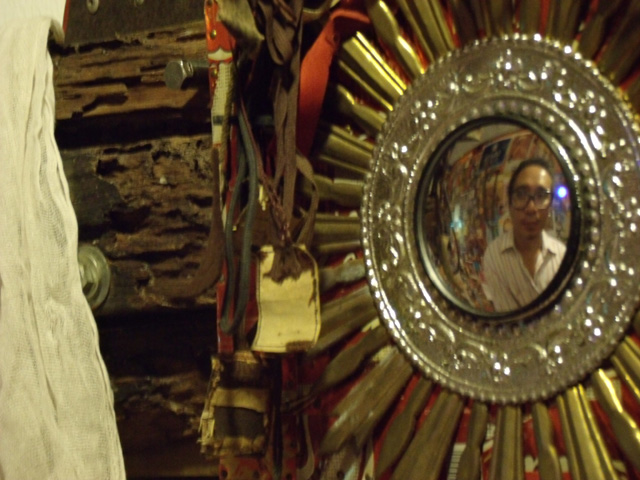 Controversial artist Mideo Cruz says that he never goes out of his way to offend; “But I do like to provoke debates and critical thinking. Art is a way of expressing one’s views about the world, culture and history, and this is what I do in my work. The audience is free to make their own conclusions and interpretations about the images I create, but I must confess I didn’t expect anyone to react so violently against ‘Poleteismo.’(Photos by Ina Alleco Silverio / bulatlat.com) 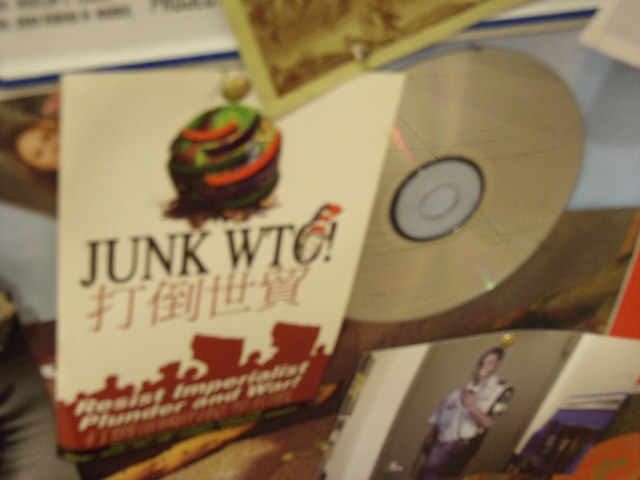 “Maybe as you’re taking a walk you might get beat up by those you offended to the extreme. With today’s technology, news travels fast! You see buddy, if you say that you have rights, what about the rights of Catholics and other sects who believe that Jesus is God? ”

Logan went on to seemingly address Cruz: “If you’re an atheist or if you believe in no god, don’t violate the beliefs of others! This is a predominantly Catholic country, my boy…”

The reporter went on to say that Cruz’ work was the sort that only a pig would believe to be “art.” His parting shot was to say that Cruz shouldn’t ask the media for help because the media doesn’t have the ability to protect him from being lynched.

Cruz’ Facebook page in the last two weeks has also been bombarded with insults and threats, with many accusing him of, among other things, being a veritable henchman of Satan himself defiling Christ and His Holy Family.

Around 11:30 am on August 4, guards of the Cultural Center of the Philippines (CPP) were surprised to discover that Cruz’ work had been vandalized. A Facebook account under the name “CPP Visual Artists” released a statement saying that the security aides were unable to apprehend the vandals, but the CPP has already taken steps to avert further damage to the exhibits.

“We request the arts and culture community to keep vigilant but let us maintain a dignified stance about this. We will not be equal to the rage and extremism of other entities. As you may recall, the CCP has always maintained that freedom of expression extends to all; not just to artists but to those who wish to speak up for their religious and spiritual beliefs within proper means and venues,” it said.

Among the messages the vandals scrawled across various parts of Cruz work was “Emedeo Cruz (I.N.C.) Sumpain ka, Bakla” and “Bakla Parusahan Ka” (Curse You, Homosexual, Homosexual you should be punished).

CCP Visual Arts called for sobriety in the wake of angry pronouncements both in mainstream media and social networks in the internet against Cruz’ “Poleteismo. ”

Archbishop Oscar Cruz , former president of the Catholic Bishops Conference of the Philippines, has called for a boycott of the exhibit.

The group Pro-Life Philippines, in the meantime, has threatened to file charges against the CCP and called the exhibition “sacrilegious and blasphemous. ” Pro-Life President Eric Manalang has been quoted on CBCP News as saying that if the CCP does not stop the exhibit, and make amends, it will proceed with the charges.

“Stopping it is not enough. The damage has been done,” Manalang told CBCP News. He did not say what kind of damage had been wrought and against whom.

CCP Visual Arts said these reactions and courses of action are all valid as moral and legal resorts of those who feel offended by art.
“And though art is representation and does not pretend to be anything more than art, we would like to remind anyone else who are considering violent and destructive acts against art, artists and art institutions that such acts are clearly criminal. Let us all be proper, respectful and tolerant despite our different views. Not all of us are Catholics, not all of us are artists, yet we are all deserving of honor and dignity,” it said.

Critics against “Poleteismo” seem to be ignorant of the fact that it has been exhibited since 2002 in venues such as the Loyola School of Theology in Ateneo de Manila University, UP Vargas Museum, Kulay Diwa in Paranaque City, and was also featured in the music video of Anghel sa Lupa by Stonefree. Cruz has recreated the piece every time it was presented for exhibition.
As for the other “culprit,” the CCP explained that it accepted the exhibition proposal and the artworks based on the determination of the premise that these are legitimate art expressions by artists who have already established reputable track records through national and global awards, grants and expositions.

As for the potential lynch-mob victim, Cruz is somewhat bewildered and a little sad over the violent reactions. A self-effacing man who avoids direct questions about how he interprets his own art, Cruz said he never expected the negative reactions coming from various quarters.? 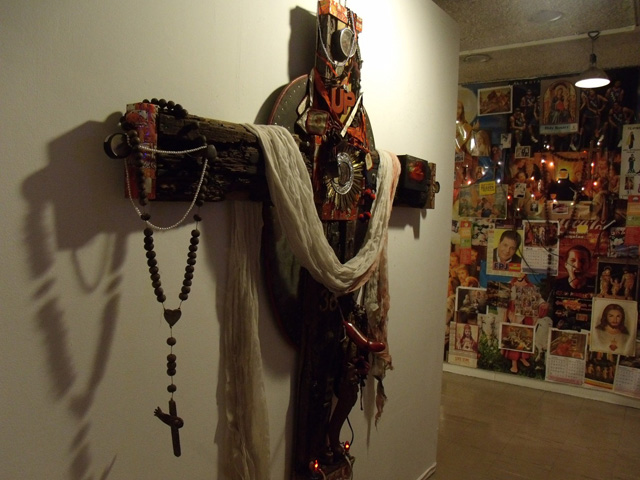 “I never go out of my way to offend; but I do like to provoke debates and critical thinking. Art is a way of expressing one’s views about the world, culture and history, and this is what I do in my work. The audience is free to make their own conclusions and interpretations about the images I create, but I must confess I didn’t expect for anyone to react so violently against ‘Poleteismo.’ The worse that I would’ve expected is for no one to come to the CCP and see my work or those of the my colleagues in this exhibition,” he said.

There are those who might say that Cruz is being a bit too naive when he said how surprised he was by the outrage generated by his work. He put up pictures of Jesus Christ and Mother Mary alongside condoms; he got plastic piggy banks and put them inside a glass display case, the sort that’s commonly found in churches; he hung crucifixes and rosaries next to wooden phalluses. Like reporter Logan said, “the Philippines is a predominantly Catholic Country,” so the reaction of some quarters could not have been such a shock.

“I wanted to provoke people into thinking. I titled my work ‘Poleteismo’ which loosely translates into ‘many beliefs’ or ‘many deities.’ Throughout history, humanity has grown to create new gods and these are not always religious figures but concepts and objects. Some have taken to worshipping money; some see politicians as godsend. People create idols and these idols whether or not they’re deserving of idolatry or worship affect our lives and how we function and see the world,” he said.