CCP should have stood firm against censorship – National Artist

MANILA — The chairman of the Concerned Artists of the Philippines (CAP) and National Artist for Literature Dr. Bienvenido Lumbera expressed strong disappointment over the decision of the Cultural Center of the Philippines (CCP) and its Board of Directors to close the exhibit Kulo long before its originally scheduled end on August 21.

In a forum in the College of Mass Communication in the University of the Philippines Diliman campus, Lumbera said it was disappointing and frustrating how the CCP bowed down to pressure from a few quarters and in the process failed in its duty to uphold the rights of artists and the freedom of expression.

“The CCP should have stood its ground and resisted the demands of those who did not understand the implications of their actions when they raged against an art piece. It did more than just shut the doors of a gallery exhibiting Kulo, it surrendered the rights of artists and allowed censorship in,” he said.

The National Artist said the CCP’s action was also a cause for alarm because it sets a dangerous precedent.

“It sends a message to artists, that they should be more careful when creating their art for fear of repercussions. This is an attack against creativity and the freedom of expression; artists are being told to toe a certain line and repress what they truly think and feel about society and how they experience the world,” he said.

Lumbera also questioned how the CCP seemed to have caved in after former First Lady and wife of ousted ex-dictator Ferdinand Marcos gave her views on Mideo Cruz’ controversial installation “Poleteismo.” 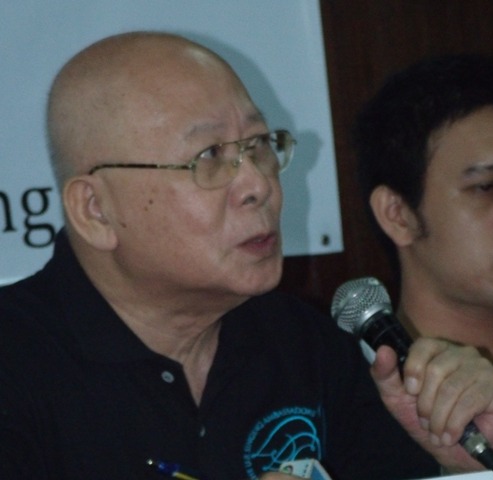 Commenting on the issue of the closure of the controversial Kulo exhibit including Mideo Cruz’s “Poletesismo,” National Artist for Literature Dr. Bienvenido Lumbera says the Cultural Center of the Philippines (CCP) and its Board of Directors should not have bowed down to pressure from a few quarters. (Photo by Ina Alleco R. Silverio / bulatlat.com)

“Who is Imelda Marcos anyway? She was the wife of a former president. What right has she, what authority does she have to lay down what constitutes art and what doesn’t, what’s obscene and what’s not? It’s most unfortunate that the CCP did not take the opportunity to clarify concepts surrounding art, how to appreciate it and other related ideas to foster healthy and productive discussions on matters such as this,” he said.

The CAP and the loose artist formation Palayain and Sining (Set Art Free) said they will hold a symbolic action on August 21 as the CPP officially ends the exhibition run of Kulo.

Right to agree to disagree

Karen Ocampo Flores, former head of the CCP Visual Arts and Museo Division of the CCP, tendered her resignation yesterday over the flop surrounding the exhibit. She said she did her best to try and clarify how everything connected to the exhibit went through the CCP’s processes, but in the end, the political pressure mounted went below the belt.

“First off, Imelda Marcos should not have been allowed media mileage over this issue. Second, religion has never been the focus of whatever fights that have unfortunately erupted over this. This is all about politics and the right of artists and everyone else to express creatively their beliefs. I resigned with my convictions intact; I simply exercised my right to agree to disagree,” she said.

Flores called on Filipino artists to support the CCP and bring issues of censorship and curtailment of the freedom of expression constantly to its attention and in the process have the public collectively deal with them.

Directly addressing those who used religion to attack the exhibition, Flores said, “Religion should be there to nourish and sustain us, but it shouldn’t be used to foster hate and conflict and widen the gap of differences,” referring to those who attacked Cruz over the media and the internet saying that he “violated their religious beliefs.”

A campaign for education

The chairwoman of the UP Art Studies department Prof. Cecilia Sta. Maria de la Paz shook her head over how the CCP chose instead to close the Kulo exhibit than engage in a campaign of education. She said the whole controversy would not have gotten out of hand and could have turned into something positive had the CCP taken a more proactive stance.

“The CCP gave in to the deep-seated fears and lack of knowledge of the public. On the other hand, the media could also have helped put Mideo’s art in context and encourage discussions and debate instead of directly or not fomenting arguments and fights. What is the nature of the offense in this case concerning a piece of art? What did the artist mean by constructing his piece in such a way that many deemed offensive? There’s a need for visual literacy here, and we could have used this opportunity to impart this,” she said.

De la Paz said that Filipinos should realize that the age when art is considered only in terms of its entertainment and decorative value is long over.

“What happened affects our rights as a whole. Threats against artists are threats against the rest of us. We want discourse, not hysteria. You just don’t shut doors just because you feel offended — let’s talk about it,” she said.

Writer and art historian Prof. Nick Tiongson of the UP College of Mass Communication, in the meantime, said the Philippines already has a history of censorship. He cited various instances wherein works of art in the fields of film and dance have been censored by the government since the 1930s. He said that in the 1950s, bishops called for a ban against ballet because of its supposed “lewdness.”

“All these years we have been battling against censorship. Ideally , the media and the arts have a common goal: to tell the truth about society with media doing this through exposition, and the arts through creative expression. If we allow censorship or allow the distortion of art and how it is appreciated, we allow the status quo to continue and it is a state of things that goes against the interest of the Filipino people,” he said.

“Do we want Philippine art to remain a realm of escapism instead of an active institution that speaks about the ills of society and provokes ideas and positive action for change.

“Art is always subversive in this sense. Artists want the audience to dream of a better world or change a bad of state of things,” he said.
Tiongson appealed to the media to work with artists in fighting against any and all attempts at censorship.

“What’s most alarming about what happened to Kulo is how the Church did not have to take action to impose censorship, but the government itself did it by putting on pressure on the CCP,” he said.

“It’s ironic how those who criticized ‘Poleteismo’ and violently attacked it and the artist declare themselves as followers of Christ. It’s ironic that this happened in the only Catholic country in Asia, but also one of the most corrupt,” he said.

Performer Cabring Cabrera for his part said President Benigno Aquino III exposed himself when he supported the calls against ‘Poleteismo.’ He said Aquino essentially supported censorship when he agreed with moves to close down the exhibition it was part of.

“Not only has ‘straight path’ been revealed to be full of potholes, it’s also very narrow,” he said. “How can we expect the public to be more discerning about art and the political and social messages it can impart if society’s leaders themselves are not? We must fight against censorship because we must not allow anyone to curtail our rights to say what we think and what we believe,” he said.

Painter Egai Talusan Fernandez for his part said those who were offended by Cruz’ art missed seeing the whole message it wanted to impart. He also said matters of belief and religion were not the only concerns of the art piece and instead it sought to provoke critical thought on other issues affecting society.

“This is not an attack against Christians or Christianity; this is one artist expressing ideas about the world and the realm of experience. It’s funny how back in the times of Jesus Christ they used to throw Christians to the lions and the Christians accepted it as martyrdom. Now there are Christians who have themselves turned into lions,” he said.

Renowned dancer Myra Beltran in the meantime called on all artists and those who believe in the creative process and how it can help transform society to resist censorship and defend the freedom of expression.

“I would always want to enjoy the freedom to speak about the whole of human experience even if it’s ugly,” she said, quoting a poet.

In a related development, Sining Bugkos, an alliance of cultural groups said the plans of several lay Catholic groups and Christian denominations to file charges before the Office of the Ombudsman over the Kulo exhbit was “an exhibit of harassment.”

Earlier, Pro-Life led by a certain Jo Imbong said it will file charges against 11 CCP officials and Mideo Cruz for allegedly violating Article 201 of the Revised Penal Code.Art. 201 on immoral doctrines, obscene publications and exhibitions and indecent shows.

Sining Bugkos chairman Max Santiago said the purported charges are tantamount to harassment. “This reminds us of the period of the Inquisition, a time when religious authorities ruled over logic and reason,” he said.

Santiago urged the CCP to re-open the Kulo exhibit and allow the public to decide intelligently on the ideas behind the art pieces.