During the August 9 budget hearing of the DOH, Bayan Muna Rep. Teddy Casiño exposed the practice of the Philippine Children’s Medical Center (PCMC) of asking indigent patients to pawn personal items like mobile phones and watches in exchange for releasing patients.

Gabriela deputy-secretary general Gert Libang said the Aquino administration should decisively address issues concerning the “dismal state of reproductive health.” She said the government has the main responsibility to ensure that there are sufficient funds for public health, including coverage for comprehensive maternal and child care services.

“Only when health care and other social services assume priority in government spending could it begin to concretely promote women’s health,” she said.

According to Libang, the government has long neglected public health services, and one of the immediate effects is the erosion of maternal and infant health care .

“With the government spending less and less on key health services, women are deprived of appropriate health care services that will enable them to go through pregnancy and childbirth safely and ensure the health of their newborns,” she said. 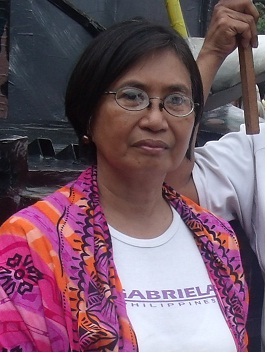 Gabriela deputy secretary-general Gert Libang said the Aquino administration should decisively address issues concerning the “dismal state of reproductive health.” She said the government has the main responsibility to ensure that there are sufficient funds for public health, including coverage for comprehensive maternal and child care services. (Photo by Ina Alleco R. Silverio / bulatlat.com)

According to Gabriela, the proposed 2012 budget for the Department of Health (DOH) reflects the Aquino government’s “wrong priorities and insubstantial plan of action for addressing reproductive health.”
“The P10.265 billion-proposed nominal increase (US$23.87 million) in the 2012 DOH budget is deceptive. The supposed increase is not intended for actual delivery of tangible health care services that will benefit women and the people. The truth is, the proposed budget does not provide for the construction of additional maternal hospitals and substantive increase in the hiring of doctors, midwives, and other medical professionals. These measures could, without a doubt, do much to improve tragic statistics on maternal death and infant mortality,” she said.

Based on reports, allocations for infant and child care services such as vaccination and immunization has been cut to a mere P1.874 billion (US$43.5 million), down from last year’s P2.492 billion (US$57.9 million). In the meantime, the budget for subsidies to indigent patients for confinement or use of specialized equipment has been decimated from P16 million (US$372,093) in 2011 to zero.

“If this budget will be approved, more poor Filipinos including women and children will be deprived of health services. Women in particular will have even less access to essential reproductive health care services,” Libang said.

The women’s group also said that while there has been a considerable increase in proposed allocations for the so-called “Family Health and Responsible Parenting” program, this will not necessarily lead to the betterment of the situation of reproductive health care.

“Providing public health care goes beyond distributing free condoms and other contraceptives. Without the provision of comprehensive reproductive health care services, including proper education and appropriate services, Filipinas will continue to suffer from complications of pregnancy and childbirth; infants born to these mothers will not be assured of good health. This guides both our demand for greater health budget and also the passage of the reproductive health bill,” she said.

The women’s rights activist said all women and the rest of the Filipino people should call on the Aquino administration to increase allocations for health and other social services.

“It is the people’s money that the Aquino government wishes to allocate and spend, so it must necessarily serve the interest of the people. Women should step up our intervention in the budget process to ensure that the people’s welfare is correctly prioritized,” she said.

In the House of Representatives, Bayan Muna Rep. Teddy Casiño is calling for higher budgets for public hospitals. The activist lawmaker said hospitals are being turned into “pawnshops.” Saying he doesn’t want the country’s public hospitals to turn into pawnshops, Casiño said, he wants the DOH budget restored to their original figures.
During the August 9 budget hearing of the DOH, Casiño exposed the practice of the Philippine Children’s Medical Center (PCMC) of asking indigent patients to pawn personal items like mobile phones and watches in exchange for releasing patients.

MCM No. 45 directs the use of collaterals on the basis of Republic Act 9439 or the Hospital Detention Law, while MCM No. 46 provides guidelines on the sale of the collaterals.

RA 9439 prohibits the detention of patients in hospitals and medical clinics on grounds of non-payment of hospital bills or medical expenses. The law states patients who have fully or partially recovered and who already wish to leave the hospital or medical clinic, but are financially incapable to settle completely or even just partially their hospitalization expenses are allowed to leave the hospital. Patients also have the right to demand issuance of the corresponding medical certificate and other pertinent papers required for their release from the hospital upon the execution of a promissory note covering the unpaid obligation.
Casiño said the practice of public hospitals engaging in pawnshop operations is very deplorable and he called on Ona to immediately stop it.

“Sec. Ona should know what is happening in government hospitals and the desperate practices they engage in just to shore up their budgets. One way to stop this is to restore the budgets of our public hospitals as contained in their original proposals. This means raising the DOH budget by at least P20 billion (US$ 465 million),” Casiño said.