By ALMA B. SINUMLAG
Northern Dispatch

MANILA – A study on the National Commission on Indigenous Peoples (NCIP) reveals the need for total reform of the commission.

At the start of the four-day gathering of indigenous peoples (IP) to observe the International IP day early this month, researchers from the University of the Philippines-Baguio presented to IP delegates from all over the country their study on the NCIP.

The study covers governance and the NCIP, by Dr. Alejandro Ciencia Jr.; titling and registration of ancestral domain, by Atty Nimreh Calde; sustainable development and protection plan of ancestral domain, by Dr. Corazon Abansi; self governance and empowerment with focus on free prior and informed consent (FPIC), by Maileenita Penalba; the quasi-judicial powers of the agency and its implications to the Philippine state powers, by Calde; cultural integrity: protection and preservation of IP culture, traditions and institutions, by Arvin Manuel Villalon; social justice with focus on IP education, by Dr. Leah Enkiwe-Abayao; and the NCIP’s budget, by Santos Jose Dacanay III.

The NCIP’s budget was one of the highlights of the study, because as Dacanay pointed out, the NCIP is not actually poor. “The NCIP is wealthy,” he said in Filipino. On top of the budget being disbursed to them by the Department of Budget Management (DBM), the NCIP is also receiving donations from funding agencies especially at the international level. 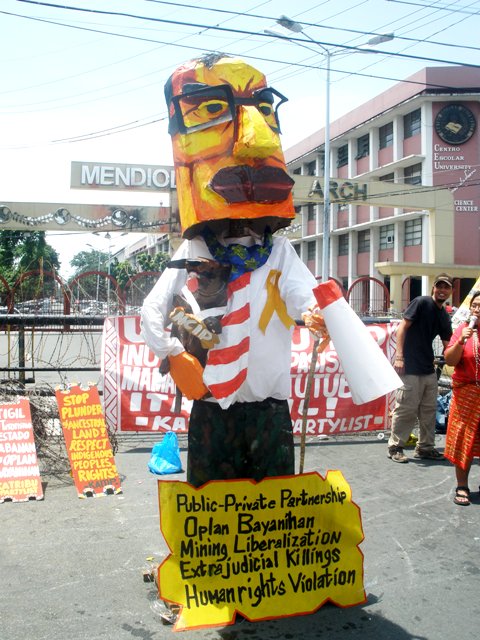 An effigy of President Aquino and the NCIP (Photo by Marya Salamat / bulatlat.com)

This report stirred some uproar in the nationwide IP delegation, because it contradicted what the NCIP had been telling them whenever they ask for help.

From data of the Commission on Audit (COA), the IPs found out that 60-percent of NCIP’s annual fund goes to personnel services while 40-percent goes to IP services. The bulk of this 40-percent, said Dacanay, goes to Educational Assistance Program (EAP) which, he said, is “a palliative”.

Dacanay charged that the NCIP has shown “lapses in maintenance and management of funds, misuse of funds and cases of unqualified grantees of EAP. This is evident, he added, in the perennial complaints of delayed release and even non-payment of EAP, and in the data that most of the scholars are relatives of NCIP officials.

In 2004, stale checks (out-of-date checks) worth P128,500 which were in the hands of grantees were not encashed. Also, in Region XIII, EAP funds had been spent for matters not directly related to the program.

“All these only show how loose the commission is in terms of financial management,” Dacanay concluded.

Meanwhile, Dacanay also questioned the use of the term “donations” by the NCIP in referring to the funds given to the IPs for social development projects. These funds, Dacanay said, are the rightful share of the IPs and as such, it is wrong to call it as donations. “That fund is not charity coming from the commission,” he said.

Governance and the NCIP

In studying the matter of governance and the NCIP, the IPs found out that the Philippine President’s regard for the NCIP hugely impacts on its implementation of the IPRA. “Past presidents have given little to no importance to the indigenous peoples,” the study noted. According to the researchers, despite the enactment of the IPRA law, presidents since the Estrada regime did not really recognize the rights of the IPs. This was evident, the participants said, during President Aquino’s recent State of the Nation Address (SONA) where not a word was said on IP issues.

Also, the IPs pointed to how the commission relates with other agencies, citing for example how during the time of Fidel Ramos, the Mines and Geosciences Bureau (MGB) and the Department of Environment and Natural Resources (DENR) had contradicting mandates.

During the Estrada regime, the budget for the NCIP was slashed. Under the Arroyo administration which actively supported the mining industry, the NCIP was forced to follow, said the IP’s study of NCIP.

In titling and registering Ancestral Domain, since it was formed the NCIP has granted a total of 158 Certificate of Ancestral Domain Titles (CADT), 89 ADSDPPs (ancestral domain sustainable development and protection plans) and 312 FPICs (free prior and informed consent).

Atty Calde pointed out how the NCIP has been quick at issuing certification preconditions (CP) for projects such as mining and others, but not as quick in issuing ADSDPP, which Abansi has described as the road map to sustainable future of IP communities. 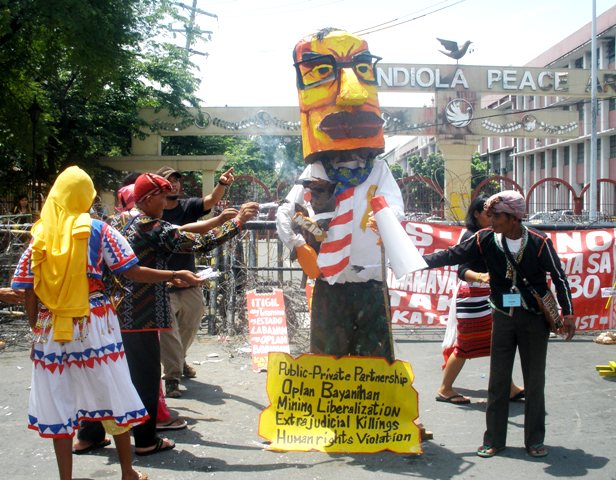 Studies revealed the NCIP had not prioritized the interests of indigenous peoples. (Photo by Marya Salamat / bulatlat.com)

The IPs who assessed the NCIP also found out that some of the CADTs (certificate of ancestral domains) it had issued went to corporations and not to IP communities. Given all these, the researchers said the NCIP showed clearly that its priority is not the interest of the IPs.

On self governance and empowerment

In Penalba’s study, from 2002 to 2009, the NCIP made possible the mandatory representation of IPs to legislative councils and other local policymaking bodies. IP consultative bodies in different levels of government were created and tribal villages and certification of tribal membership were also created, among others.

Penalba said that given this record, it would seem the NCIP has facilitated the IP’s integration into the existing, mainstream decision-making bodies rather than empowered them to use their Indigenous Socio Political Systems (ISPS) that would have equated to self-governance.

Even in the quasi-judicial powers of NCIP like its Regional Hearing Office (RHO), Calde said it had not been different from regular judicial processes. This resulted, he said, to strengthening the state powers over IP communities.

The IP’s study of NCIP also showed that it had not prioritized the IP culture. “Only 2-percent of the NCIP’s budget had been allotted for cultural work,” Villalon lamented. He added that among the 15 reported researches on Indigenous Knowledge Systems and Practices (IKSP), only one had been completed and submitted.

Instead, Villalon said, the agency supported festivals that commercialized and exoticized the indigenous culture. This, Villalon said, runs counter to the NCIP role of protecting the IP culture.

Vicky Tauli-Corpuz, executive director of Tebtebba Foundation, shared that in one of the meetings of the United Nations Committee on the Elimination of Racial Discrimination (UN CERD), a representative from the Philippines (from NCIP) declared that there is no racial discrimination in the country. “It disregarded outright the issues being faced by IPs nationwide,” she said.

Corpuz added that the CERD (Committee on the Elimination of Racial Discrimination) doubted that pronouncement. She quoted the committee as saying that the fact that the country had enacted a law for respecting IP rights (IPRA) meant it is recognizing that racial discrimination is actually happening in the country.

The IPs then called for a total revamp of NCIP as stated in IP agenda they submitted last year to Noynoy Aquino. Also, they called for an independent evaluation or review of the performance of NCIP’s personnel. IP groups in the country also urged the investigation and correction of the fraudulently awarded titles to false claimants.
Reposted by