You Are Here: Home → 2011 → August → 30 → Residents of San Roque remain vigilant amid threat of demolition

Residents of San Roque remain vigilant amid threat of demolition

MANILA — Residents of Sitio San Roque in Quezon City remain vigilant even after Mayor Herbert Bautista have extended the deadline for the demolition of their homes.

“It is hard to be poor because we are always neglected by our government,” Pilar Angeles, 82, more commonly known as Nanay Laring, said. Angeles was among the first to move to Sitio San Roque, back on those days when the piece of land was a mere “damuhan.” She added that despite her age, “I will do my part to help save our homes.”

In a report, City administrator Victor Endriga said the National Housing Authority is going to demolish about 9,000 households by August 31. But on Monday, August 29, Bautista announced in a radio interview that the city government would be postponing their earlier pronouncement on the demolition.

Sitio San Roque is a part of the Quezon City Central Business District, a joint venture between the National Housing Authority and Ayala Land. The 250-hectare project aims to develop the area into a prime property at the center of Quezon City through constructing commercial and residential units. It, however, currently serves as home to some 20,000 urban poor families, said Kadamay, an urban poor group helping the residents in their struggle. 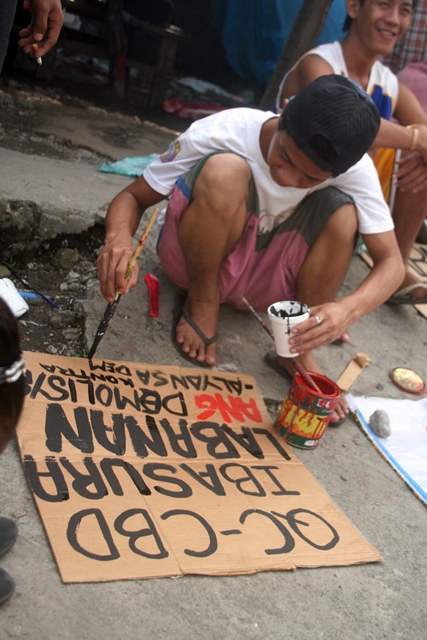 Estrelieta Bagasbas, chair of San Roque’s September 23 Movement, in a statement, said residents do not trust Bautista for being “in connivance with big businessmen and foreign capitalist who will earn from taking away the lands that the poor have developed over the years.” The September 23 Movement is named after the violent demolition in 2010.

“I voted for Mayor (Bautista). He even went to our house last election. He was my idol even back in the days when he was still an actor. But now I have nothing but ill-feelings toward him. Our votes have been put aside,” Angeles told Bulatlat.com.

In preparation for the original deadline set on August 31, Thursday, the residents of Sitio San Roque have set up barricades and made placards, demanding for the abolition of the QCCBD project. They would also hold an overnight vigil just in case the demolition would “surprise” the residents on Thursday.

In a mass held on Wednesday night, Fr. Paul Danao, CSC, told Bulatlat.com that it is natural for the residents of Sitio San Roque to fight for their homes. “They are ready. They are even ready to die for this cause. But this should not happen because everything that we see here is God’s blessings, which is meant for everyone and not for a chosen few.”

According to Carlito Badion, chair of Kadamay and convener of Alyansa Kontra Demolisyon, Quezon City has lately become a hotspot for demolition. He said there are three urban poor communities in the city that has immediate demolition threats to give way to Public-Private Partnership, one of President Benigno. Aquino III’s key economic program.

“Almost year after the violent demolition here in Sitio San Roque, the President has yet to show its comprehensive plan for urban poor communities,” Badion said, “We are prepared for what is to come. We will hold barricades until the 31st, even beyond that, because we do not want to be caught off guard.”

Angeles, teary eyed, said she is willing to kneel down before Aquino just for the demolition not to take place. “We loved him. We voted for him. He should not allow these things to happen.”

If the demolition would take place, Angeles said, she would prefer to live under the MRT train. And should police ask her to leave, she said she would tell them that “I used to have a home. But it is all gone now because of you ( the government).”

“It is the mandate of the government to protect the people’s interest. But it seems that they are also causing them so much pain, hence the demolition of their homes. It is time for the government to fulfill its responsibility,” Danao said.