“We would like to appeal to both panels to iron out their differences and proceed with the formal peace talks. We believe that it is better to engage in principled debate over the negotiating table rather than other venues. The PEPP also encourages both sides to abide by their own reaffirmation of the validity and binding effect of all previous bilateral agreements as stated in the February Joint Statement.” – Philippine Ecumenical Peace Platform

Speaking in a forum organized by Pilgrims for Peace August 27, Luis Jalandoni, chairman of the NDFP peace panel, said the GPH wants to set aside the 12 agreements, which were signed since 1992, including the Hague Joint Declaration that has laid down the framework of the peace talks.

The Hague Joint Declaration enumerates the substantive agenda of the formal peace negotiations that include human rights and international humanitarian law, socio-economic reforms, political and constitutional reforms, end of hostilities and disposition of forces. These agenda should be tackled in that particular order, according to the Declaration.

The GPH, then the Government of the Republic of the Philippines (GRP), and NDFP peace talks began when Cory Aquino took the reins of government in 1986. The talks collapsed after the Mendiola massacre in 1987 and resumed in 1992 when Fidel V. Ramos took over the presidency.

The GPH panel insisted that the Hague Joint Declaration is a “document of perpetual division” and the Joint Agreement on Safety and Immunity Guarantees (Jasig) as well as the Comprehensive Agreement on Respect for Human Rights and International Humanitarian Law (CARHRIHL), are mere “confidence-building-measure” agreements.

“Compliance with signed agreements is an absolute requirement in any peace negotiations. It puts the sincerity of the parties to the test. OPAPP Secretary Teresita Deles and Alex Padilla are completely destroying the prospect of a just peace through negotiations by attacking and seeking to nullify The Hague Joint Declaration and the JASIG,,” Fidel Agcaoili, NDFP spokesman, said in a statement sent through email. 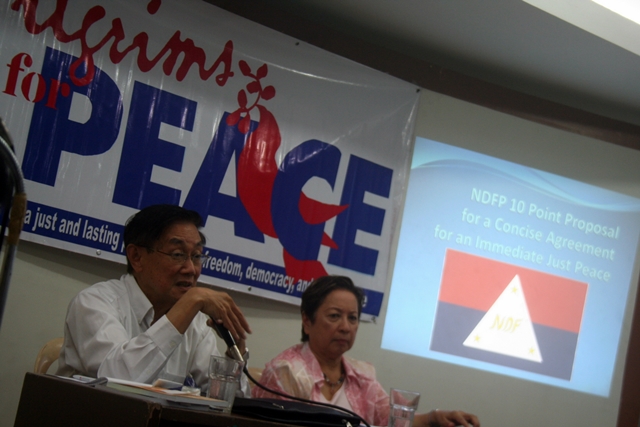 Luis Jalandoni and Coni Ledesma call on the Government of the Philippines peace panel to comply with the previously signed agreements.(Photo by Janess Ann J. Ellao / bulatlat.com)

Coni Ledesma, a member of the NDFP panel, said the signed agreements are products of their sweat and tears. CARHRIHL is the first major agreement signed by both parties in accordance with the Hague Joint Declaration.

“The NDFP will not surrender; it will fight to address the root causes of the armed conflict,” Ledesma said.

In a statement, GPH peace panel chairman Alexander Padilla said both parties should proceed to achieving a common draft on Comprehensive Agreement on Socio-Economic Reforms (Caser), claiming that the demand for the release of detained NDFP consultants and staff is a “precondition” set by the NDFP.

Jalandoni said the release of detained NDFP consultants is a commitment made by the GPH during the resumption of peace talks in February.

Signed in February 1995, Jasig provides immunity and safety guarantees to all participants to the peace talks. Under the Jasig, both parties have the inherent right to issue documents of identification to its negotiators, consultants, staffers, security and other personnel. Such documents, it says, shall be duly recognized as safe-conduct passes.

CARHRIHL, on the other hand, states that political prisoners must be released in adherence to the Hernandez political doctrine.

Jalandoni said Padilla vowed to work for the release of NDFP consultants and staff until June 1 but not one had been released at that time.

Padilla said they conducted a verification process for the holders of documents of identification (DI), July 26 to ascertain the identities of Jasig-protected persons. Padilla said the safety deposit box containing the diskettes with encrypted photographs could not be extracted.

“If none could be verified, there was no obligation on the part of government to release and that should any be made, the same was part of government’s confidence building measures. The failure was theirs and theirs alone,” Padilla said.

In a report by Business World, Padilla said “Jasig right now is inoperative,” citing as basis what he called “failure of the NDFP to comply with the requirements of Jasig.”

“As a lawyer, he should know that encrypted photographs are photographs. He also knows that encrypting these is dictated by security considerations and the verification of these photographs is not mandatory in the Jasig as he himself and his predecessors, Howard Dee and Silvestre Bello III, have done,” Agcaoili said.

Agcaoili added that Jasig protects not only the holders of documents of identification but also those publicly-known to be involved in the GPH-NDFP peace negotiations as negotiators, consultants, staff, researchers, security personnel and couriers of both sides.

“Padilla is indeed a fool for failing to know and respect the full scope and terms of the Jasig despite his being a lawyer and the GPH chief negotiator. He is killing the peace negotiations by blocking the release of all or most of the JASIG-protected persons in violation of the Jasig and the 2011 Oslo joint statements,” Agcaoili said.

Jasig cannot be terminated, suspended or declared “inoperative” unilaterally by either GPH or NDFP. It can only be terminated by written notice of either principal, as was done by Joseph Estrada on 31 May 1999, Agcaoili said.

Agcaoli said that in declaring the Jasig as “inoperative”, Padilla, has practically terminated the Jasig without the required issuance of a notice of termination by the GPH principal. “He brazenly violates the JASIG and spits on the signature of the GPH principal. He usurps the authority of his principal and steps on his head,” Agcaoili said.

Padilla maintained that the Jasig was a mere “side-table mechanism.” “We can’t put Jasig before the Caser,” Padilla said in a report.

“If small obligations cannot be fulfilled by the GPH, how can the people expect it to fulfill its obligations under a comprehensive agreement on social and economic reforms?” Agcaoili asked.