MANILA – The family and lawyers of detained cultural worker, poet and freelance journalist Ericson Acosta filed a petition for review at the Department of Justice (DOJ) in Manila on September 1. Acosta’s counsels led by Julian Oliva, Jr., Edre Olalia, and Ephraim Cortez of the National Union of Peoples’ Lawyers (NUPL) said Acosta has been detained for six months without having been formally charged and should be immediately released. 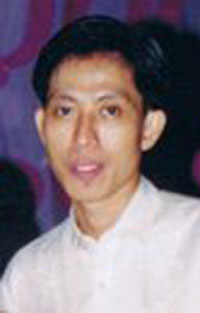 Acosta was arrested without a warrant on February 13, 2011 in Barangay Bay-ang, San Jorge, Samar by elements of the 34th Infantry Battalion of the Armed Forces of the Philippines (AFP). He was interrogated for at least eight hours non-stop. Acosta has been detained at the Calbayog City Sub-Provincial Jail from February 16, 2011 up to the present without any commitment order issued by the court.

Acosta’s supporters in the Free Ericson Acosta Campaign (FEAC) said the DOJ should act promptly on the petition for review. The petition came after Acosta’s motion for reconsideration filed June 21 was denied by the local prosecutor in a July 12 resolution. The NUPL received a copy of the said resolution only last August 17. Acosta’s motion was denied as “the defenses raised need to be threshed out in a full blown trial,” according to the resolution.

“The investigating prosecutor seriously erred in recommending that an information for illegal possession of explosive be filed against (Acosta) in court,” read the NUPL’s petition. The counsels said DOJ Secretary Leila de Lima should set aside resolutions made by Investigating Prosecutor Agustin M. Avalon dated April 20 and July 12, and issue a new resolution dismissing the complaint against Acosta. 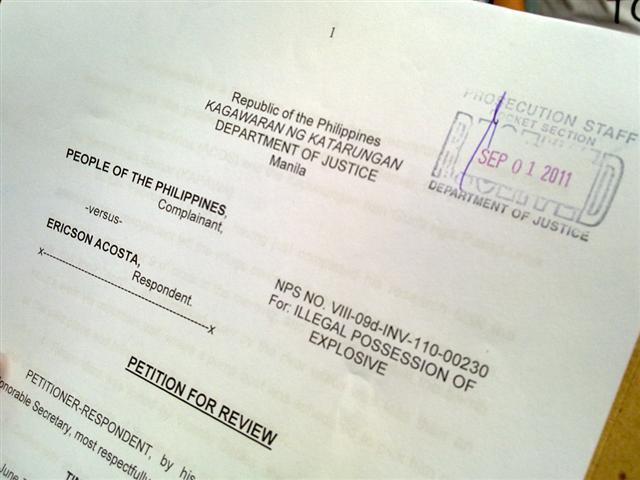 It stated several irregularities and human rights violations in Acosta’s arrest and detention, namely, 1) that Acosta was arrested without warrant while not committing any crime or doing anything illegal; 2) he was not informed of the reason for his arrest at the time of his arrest; 3) he was denied the right to counsel; 4) he was denied a phone call and prevented from contacting his family or his lawyer; 5) he was subjected to prolonged interrogation for 44 hours; 6) he was physically and psychologically tortured during tactical interrogation; 7)mhe was deprived of sleep, threatened, intimidated, coerced and forced to admit membership in the NPA; 8) the grenade subject of the case was planted; 9) the complaint against him was filed in court only after 72 hours and 30 minutes; and, 10) he was detained in a military camp, which is not of civilian jurisdiction.

“Assistant Provincial Prosecutor Avalon resolved only two of the 10 foregoing defenses of respondent in arriving at his conclusion that our client be charged with illegal possession of an explosive,” the lawyers argued in the petition.

Oliva said in failing to resolve the other defenses and issues Acosta and his counsels raised in his counter affidavit, Avalon essentially conceded that there really was a violation of Acosta’s constitutional, statutory and human rights by the military.

“The police and military authorities are required to perform several acts in the arrest, detention and delivery of the respondent to judicial authorities, but even they have admitted irregularities in their conduct and procedure in Acosta’s arrest, detention and interrogation,” he said. “They admit and support the fact of the violations of our client’s rights in the Joint Affidavit of Arrest and other documents we have submitted in this case,” he said. 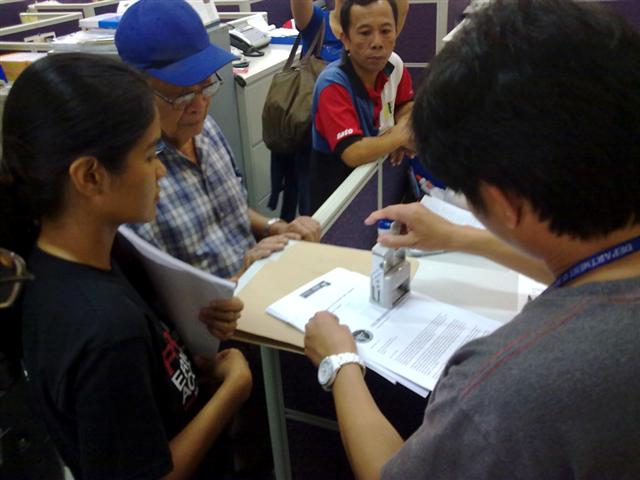 Oliva, the main lawyer assisting Acosta in Samar, said the public prosecutor is mainly responsible for the preliminary investigation to determine probable cause in his client’s case.

“With all due respect, he should’ve considered and evaluated all the documents and evidence presented before him such as the complaint, affidavits, counter-affidavits, sworn statements, etc. because his role as the public prosecutor is not mainly to prosecute but essentially to do justice to every man and to assist the court in dispensing justice,” he said.

Oliva said they want the DOJ to conduct a preliminary investigation on Acosta’s case.

“The ultimate objective of a preliminary investigation is to secure the innocent against hasty, malicious, and oppressive prosecutions, and to protect him from open and public accusation of crime, from the trouble, expenses and anxiety of a public trial, and also to protect the State from useless and expensive prosecutions,” he said.

Evidence against Acosta was planted

Acosta’s counsels are also insisting that the DOJ review the case against the detained artist because not only was the process of his arrest and subsequent illegal and irregular, the evidence against him was also planted. 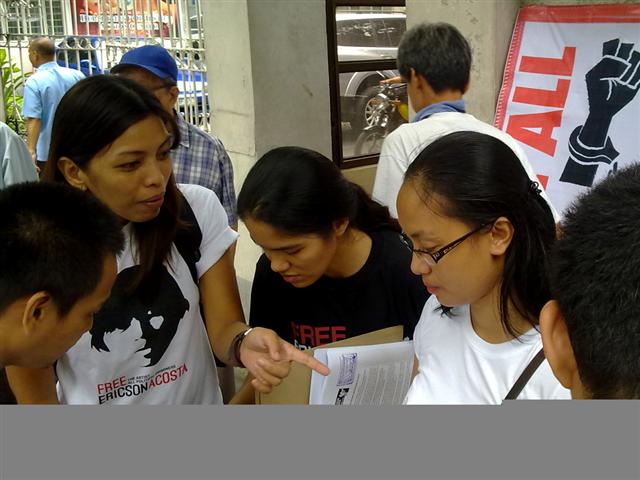 Acosta has been charged with Illegal possession of explosive for allegedly having in his possession a hand grenade, which he supposedly tried to pull out from his pocket while already being questioned and harangued by the military.

“It is highly incredible, illogical, foolhardy and contrary to common sense and ordinary human experience that respondent’s military captors after confiscating his mini-knapsack containing his computer notebook and its accessories and complimentary gadgets and already questioning respondent on them, would not be able to see a hand grenade bulging at respondent’s front right pocket and respondent would then attempt to blow up the whole platoon of soldiers, his civilian companions surrounding them including himself,” the lawyers said.

They argued that Acosta was never questioned and interrogated regarding “the grenade” but only regarding the contents of his computer notebook. The “grenade” appeared only when respondent was brought to the San Jorge police headquarters on February 16, 20011 at 6:00 p.m.

In the press releases of the 8th Infantry Battalion dated February 17, 2011 and May 11, 2011, the military said they had confiscated “a laptop with complete accessories and spare battery, an external hard drive, internet USB, a cellphone, six pieces of SIM cards, P 4,800.00 cash and personal belongings” from Acosta.

“Granted for the sake of argument that a grenade was among the things seized and confiscated from our client, the military still did not make the proper procedure for securing and taking custody of this evidence. They did not make an inventory of the things they seized and confiscated. They did not mark or take photos of these things and asked the barangay official who was present during the incident to sign as witness,” the lawyers said. 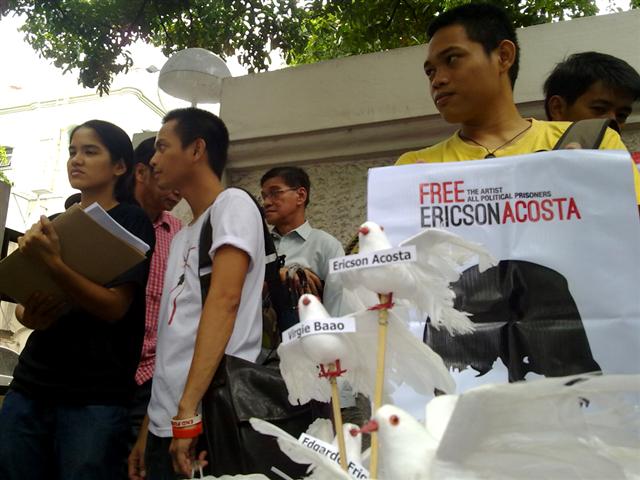 They also pointed out that the search and seizure made on Acosta and his personal belongings were in connection with and pursuant to an illegal arrest.

“Given this, any evidence the military obtained is the ‘fruit of a poison tree’ and inadmissible as evidence in any proceeding,” they argued.

Acosta’s colleagues in the artist community also joined his family as they held a program in front of the DOJ.
Stage director and screenwriter Bonifacio Ilagan called on the DOJ to “assess the legality of Acosta’s arrest and detention and to investigate and punish perpetrators of rights violations.”

Ilagan himself was a former political detainee during Martial Law and is now the secretary-general of Samahan ng mga Ex-Detainees laban sa Detensyon at para sa Amnestiya (SELDA).

TV and stage director Soxie Topacio; dance performance artist Myra Beltran; playwright and Executive Director of National Center for Culture and the Arts (NCCA) Malou Jacob; visual artists Karen Flores, Mideo Cruz, Leonilo Doloricon, and Boy Dominguez also signed the petition for the dropping of charges against Acosta. The FEAC has also gained international support from human rights advocates and artists groups in the USA, Canada and Europe. The FEAC, together with human rights groups Karapatan and Selda also called on the DOJ to investigate cases of other political prisoners.