You Are Here: Home → 2011 → September → 1 → Migrants group slams US, Nato-led attacks against Libya and Syria

Migrants group slams US, Nato-led attacks against Libya and Syria

MANILA – The largest alliance of migrant groups and families declared their strong opposition to the continuing attacks of the United States government and the Northern Alliance Treaty Organization (NATO) against Libya. Migrante International said the ongoing air strikes and military intervention in Libya encroach upon the Libyan people’s national sovereignty and right to self-determination.

“The attacks endanger the lives of Libyan nationals and thousands of migrants, and it cannot be denied that this US-led war of aggression on Libya is because of oil. The US and Nato-forces want to control Libya’s oil and natural gas reserves which Libyan leader Muammar Gadaffi has refused to subject under imperialist powers over the years,” the group said.

The most cursory look at the history of US military intervention in the Middle East shows how the US has perennially attempted to justify it wars of aggression by calling them “humanitarian rescue missions” such as what it did in Iraq in 2003.

Now, the escalating attacks of the US and Nato forces are set as a twisted commemoration of the 10th anniversary of the September 11, 2001 attacks served to justify in turn the US so-called war on terror.

“Ironically, as 9/11’s tenth anniversary nears, the number of casualties of succeeding US wars of aggression in Iraq, Afghanistan, and Libya has exceeded the number of victims of the tragedy itself,” Migrante International said.

The group said the US and Nato are conniving to topple Libyan president Gaddafi and replace him with a puppet government that would willingly to open up Libya’s nationalized oil industry to foreign control.

“For them, the invasion of Libya is a strategic move. Libya has the 9th largest oil reserves in the world and and controls the 25th largest oil firm. To topple Gaddafi and replace him with a subservient leader would greatly serve imperialist interests not only in Libya, but also in other oil-rich countries in the Middle East-North Africa region,” the group said. 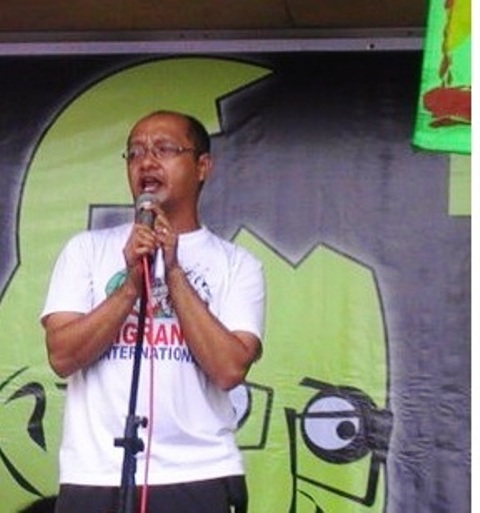 Migrante International President Garry Martinez says that the war in Libya is war for oil; he says that the United States and the forces allied under the Northern Alliance Treaty Organization is guilty of the endangering the lives of thousands of Libyans and other nationalities including Filipinos. The labor leader says that the Philippine government should not support the war and focus on efforts to repatriate trapped OFWs.(Photo by Ina Alleco R. Silverio / bulatlat.com)

Also, Migrante International President Garry Martinez said the statements of the US government and its European allies comprise yet another threat against another conflict-ridden country, this time Syria.

Martinez said Syria presents a case different from Egypt and Libya because the US has very little direct influence on Syrian President Bashar Assad and his internal affairs.

Assad, however, has wider ties with Europe and other Arab nations; this presents complications for the US and its plans for the country. Observers, however, say that it is still not above the US to use its leverage and again interfere by staging an interventionist war with the aim of installing a puppet government.

The group has also sounded the alarm against the massacre of thousands of Libyan people and other residents of the country including at least 15,000 Filipinos who are currently trapped there.
According to reports, of the total population of Filipinos in Libya, only a small number have been safely evacuated to nearby countries and were repatriated back to the Philippines. Concern has also been raised for the welfare of 20,000 overseas Filipino workers in Syria, 95 percent of them household workers and undocumented.

Martinez said it was contemptible how the Benigno Aquino III government has chosen to condone the militarist attacks and has declared all-out support for the US-led interventionist war despite the grave and serious threat on the lives of tens of thousands of Filipinos.

“Both Malacañang and the White House should be held accountable should a single drop of Filipino blood be sacrificed in the imperialist war for oil,” he said.

The group has already blamed US-Nato-led rebel forces and the Philippine Embassy in Libya for the disappearance of a Filipino engineer. The global alliance also said the government, has taken too little action and was “too late and too weak” in its evacuation efforts for Filipino migrant workers.

In a press conference, Martinez said there was no believing the declarations of the Nato that the war being waged in Libya was for humanitarian reasons.

“What should have been left for the Libyan people to decide for themselves was turned into a senseless war because of US direct intervention in Libyan affairs. With the chaos going on in Tripoli, as can be seen in the ransacking of the Philippine Embassy, humanitarian concerns have nothing to do with what’s happening. The US and Nato are after after one thing: control over Libya’s gas and oil. And, for its sake, all the rest is collateral damage,” Martinez said.

Migrante International said President Aquino should issue a strong statement denouncing the attack on the Philippine Embassy and call for the the safety of the Filipino engineer who was reportedly forcibly taken and continues to be missing. It also said Aquino should take a stand against the Nato’s attacks on Libya even if only for the sake of OFWs there.

According to reports, the Filipino engineer whose name has not been disclosed for safety reasons went missing after armed men ransacked his residence in Tripoli last August 22. The man was said to be living in a housing compound for workers of a British engineering firm, Philippine embassy in Libya spokesperson Raul Hernandez was quoted as saying in Now Lebanon.

“A group of rebels forcibly entered and ransacked the housing unit shared by Filipinos and other nationalities. One Filipino went missing after the incident,” Hernandez told the media.

The official also said the armed men also seized a car belonging to Philippine embassy staff and another vehicle from the International Organization for Migration at the Filipino mission.

He could have prevented all this damage and lessened the threats against the lives of Filipinos in Libya had he acted quickly and decisively. Unfortunately, he chose to be short-signed and up to now the Philippine government has no concrete plan. All it has done so far is to issue Alert level declarations and announce hotline numbers. It issued a call for the repatriation of 1,700 OFWs in Libya, but there are 5,000 of them there. Where did they all go? Is the Aquino government writing them off and considering them collateral damage?,” Martinez said.

“Aquino should immediately send a top level mission to start negotiations with both camps for the safe passage of trapped OFWs in Libya and their immediate repatriation.”