You Are Here: Home → 2011 → September → 2 → NDFP slams Aquino government for reneging on agreements

“If the GPH does not want [to proceed with the talks], the revolutionary struggle is there. We will not abandon our instrument for national and social liberation.” – Luis Jalandoni, NDFP

In an interview, Luis Jalandoni, chairman of the NDFP peace panel, said the “negative actions” of the GPH panel members indicate a lack of political will on the part of the government to pursue the peace talks.

Peace talks between the GPH and NDFP resumed in February. The second round of talks supposedly scheduled in June did not push through due mainly to the GPH’s refusal to release many of the 17 detained NDFP consultants. After the release of four NDFP consultants in July and August, both parties initially agreed to resume talks this month. Alexander Padilla, GPH peace panel chairman, however, wrote to NDFP two weeks ago declaring the postponement of the talks.

“Does the GPH want to scuttle the peace talks? It’s their decision. We want to continue with the talks but they [GPH] need to have a word of honor,” Jalandoni said.

Jalandoni maintained that the release of NDFP consultants is neither a precondition set by the NDFP nor a mere act of goodwill measure on the part of the GPH. “It is a commitment and obligation of the GPH to release NDFP consultants,” Jalandoni said, adding that the demand for release is in accordance with the Comprehensive Agreement on Respect for Human Rights and International Humanitarian Law (CARHRIHL) and Joint Agreement on Safety and Immunity Guarantees (Jasig).

“These are solemn agreements that need to be complied with. If they have no word of honor, how could they be trusted?” Jalandoni said.

Jalandoni related that Fidel Agcaoili, NDFP spokesman, went to Manila in May and stayed until June 1, hoping that there would be releases of NDFP consultants, as promised by Padilla. No one was released at that time.
Jalandoni said Agcaoili went back in July and stayed until August. Jalandoni said Agcaoili had a meeting with Padilla and that Padilla assured Agcaoili that other NDFP consultants would be released once the talks resume. Both agreed to schedule the next round of talks this September. 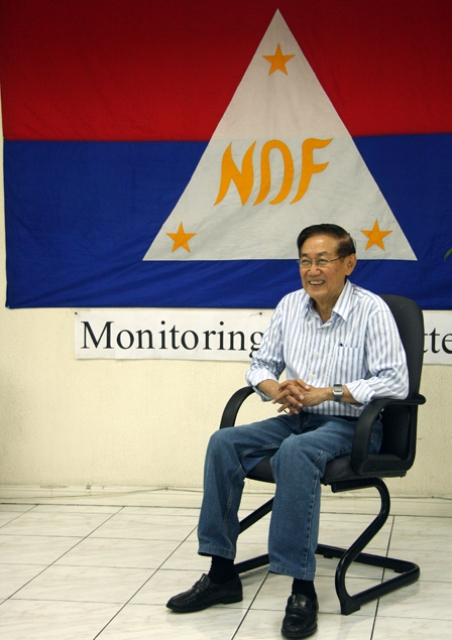 “Suddenly, Aquino publicly questioned the sincerity of the NDFP. Lacierda [Presidential spokesman] even said that all we want is the release of NDFP consultants. Then, the military branded the detained NDFP consultants as criminal elements,” Jalandoni said.

Jalandoni said the cases filed against NDFP consultants are trumped-up charges. He added that the detained consultants fought the abusive Arroyo regime and must be released like the rebel soldiers.

In a statement, Padilla said the NDFP violated Jasig when it used encrypted photographs for the safety deposit box containing names of Jasig-protected individuals.

Jasig provides immunity and safety guarantees to all participants in the peace process. Both parties issued documents of identification (DI) to their consultants and personnel.

Padilla said the GPH was not able to verify the identity of Jasig-protected individuals, particularly the detained NDFP consultants, because the diskettes are corrupted.

In a statement, Padilla said he did not terminate or suspend the Jasig. He said that due to the failure to verify the identities of the persons using aliases in the NDFP’s list of alleged Jasig-protected persons, Padilla said, there is no way to verify the NDFP’s claim that the 13 personalities it wants to be released under the Jasig are indeed in the Jasig list.

Jalandoni said both parties agreed to resolve the issue by reconstructing the list. Even so, Jalandoni said, the presentation of documents of identification by Jasig-protected individuals should suffice. “The DI is valid already,” he said, citing the release of Reynaldo Bocal when Jalandoni submitted to the court Bocal’s DI.

He said that in the case of Tirso Alcantara and Alan Jazmines, all that is needed is to withdraw the information as the two have not yet been arraigned. Jalandoni said someone from the DOJ said so.

Of the more than 80 Jasig-protected individuals on the NDFP side, Jalandoni said, only 12 use real names in their DI for security reasons. In the past, he said, the use of assumed names was never a problem and it is indicated in the Jasig.

As to Padilla’s recent statement that Jasig is already “inoperative,” Jalandoni said making such announcement is “beyond Padilla’s authority.”

Jalandoni revealed that Office of the Presidential Adviser for the Peace Process Teresita “Ging” Deles, in a phone call to Utrech, the Netherlands, said the Jasig still stands for the NDFP peace panel members and that Padilla was only referring to detained NDFP consultants.

“That’s not enough. There should be a public correction,” Jalandoni said. “If the GPH says Jasig is no longer valid, NDFP consultants would be subjects of arrest.”

Jalandoni recounted that in 2005, retired police general Rodolfo Boogie Mendoza asked from OPAPP the list of Jasig-protected individuals from the NDFP side and turned the list into an “order of battle” by announcing that those on the list must be arrested.

“That was a gross violation of the Jasig. They reversed the essence of Jasig,” Jalandoni said.