The Asian Human Rights Commission (AHRC) based in Hong Kong is appealing for justice on behalf of a 17-year-old boy in Basilan Mnindanao who was falsely accused by soldiers and policemen of being a member of the bandit kidnap-for-ransom group Abu Sayyaf. The boy was reportedly tortured and is presently detained together with adult offenders in a jail where he was remanded.

According to the AHRC, Asraf Jamiri Musa, a resident of Patikul, Matatag in Lamitan City Basilan was arrested and allegedly tortured on June 23, 2011. The alleged perpetrators were said to be members of 32nd Infantry Battalion under the 1st Infantry Division of the Philippine Army and members of the Philippine National Police led by 1st Lt. Gian Carlo A. Galanza, PA and Police Chief Inspector Nestor Placio. The human rights group said Musa’s accusers planted evidence of explosives on the boy and forced him to admit his membership to the group.

Based on the fact sheet sent by the AHRC and the Task Force Detainees of the Philippines, the 17-year old student who was aiming for a degree in Bachelor of Science in Education (BSED), was arrested along with his cousin Pawad Esmael Alpad by members of 32nd IB, 1st IDPA and members of PNP in Patikul, Basilan Province around 1:45 pm on June 23.

Asraf in a his own affidavit said he was sleeping inside the house of his aunt where he had been staying since he was an elementary student. Pawad was also there sleeping. They were suddenly roused from sleep when their aunt told them that there were soldiers looking for Asraf. 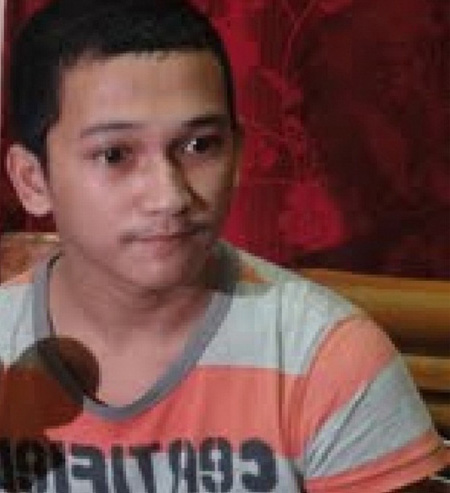 Education student 17-year old Asraf Jamiri Musa is appealing to the Aquino administration to uphold his rights and punish the elements of the Armed Forces of the Philippines ’32nd Infantry Battalion for illegally arresting him and subjecting him to torture. The boy remains in jail in Basilan Province. (Photo courtesy of The Asian Human Rights Commission / bulatlat.com)

Asraf said the military and police searched the house but did not find anything. The armed forces said they were looking for two Abu Sayyaf members supposedly named Nurhasan Jamiri and Musanna J. Musawho and were said to be staying at the house of Hadji Samiri Alpad. This was the house where Asraf was.

Without listening to the two boys, the police and soldiers reportedly took Asraf and Pawad to the brigade detachment in Lamitan. Asraf’s aunt went with them. After half an hour, the three of them were taken to the military brigade in Tabiawan, Isabela City, Basilan.

“I was taken inside the brigade and made to sit in a waiting shed. The police and military interrogated me and asked me if I am an Abu Sayyaf member. I told them that I am a student, but they did not believe me,” he said.

Pawad was released but Asraf was left behind.

According to the AHRC, Asraf was taken indoors and at about 10:00 pm that same day those who arrested him forced him to admit that he is an Abu Sayyaf member. The minor was blindfolded with a handkerchief and handcuffed behind his back. His feet were tied with a piece of rope, and the military proceeded to punch him on the stomach at least three times. He was also punched on the left side of his body.

“When Asraf denied his interrogators’s accusations, he was taken to a drum full of water and his head was submerged in it three times. The entire time he was also being threatened that if he didn’t admit to being a member of the Abu Sayyaf he would be killed. Asraf also related that his head was wrapped with plastic bag and threatened with being buried alive,” the human rights group said.

Asraf recounted that his ordeal was repeated and lasted for at least two hours. Afterwards his torturers took him back to the waiting shed where they tied him up.

The following morning, June 24, Asraf’s torturers ordered him to bathe. Afterwards, the boy was again blindfolded and taken elsewhere.

According to Asraf’s accounts, he was made to hold a hard object which he could not determine, but he sensed that pictures were being taken. Then his torturers took him to the police station and then to the office of the local fiscal, both in Isabela, Basilan. He learned afterwards that it was a hand grenade that the military forced him to hold.

At 5pm the following day, June 25, the minor was remanded to provincial jail, still in Isabela City. He was charged with Illegal possession of an explosive .

According to Asraf, one of his torturers introduced himself as Lt. Galanza and he was able to recognize his companions because his blindfold was loose.

On the morning of 10am on June 28, Dr. Alfonso L. Bravo, Jr. MD, chief of hospital of Ediborah P. Yap Memorial hospital and the Lamitan District hospital examined Asraf and issued a medical certificate. His findings revealed that Asraf sustained a significant contusion on the right forehead, an abrasion on the left forehead; and a large contusion hematoma on the bridge of his nose. The minor also had erythema on the left chest, which is defined in medical journals as a redness or a rash that could be the result of trauma because of damage to capillaries under the skin.

In an interview with the media, Asraf said his only dream was to finish school so he could help his parents.

The AHRC is circulating a petition on Asraf’s behalf and is appealing to the public to send letters to President Benigno Aquino III; Department of Social Welfare and Development secretary Corazon Soliman; Director General Raul Bacalzo, chief of the PNP; and Department of Justice Secretary Leila de Lima. The group along with Task Force Detainees of the Philippines is appealing for Asraf’s immediate release. At the least, the human rights group demand that Asraf be placed under the custody of the DSWD in pursuant to Republic Act 9344 or the Juvenile Justice and Welfare Act of 2006.

Asraf’s ordeal features several serious human rights violations against the rights of children. The Philippines is a signatory to the International Covenant on Civil and Political Rights (ICCPR), Universal Declaration on Human Rights and also United Nations convention against torture and other degrading treatment or punishment. As signatory to these covenants, the Aquino administration is called upon to respect and abide by their provisions, among which there are prohibitions against torture.

Republic Act 9745 also known as the Anti-Torture Law of 2009 criminalizes acts of torture. That Asaf is also a minor also serves to make the violations more condemnable than they already are. Asraf’s rights as a minor should have been protected under Republic Act 7610, a Special Protection of Children, but his torturers did not hesitate to attack and violate them.

In the meantime, observers say that President Aquino has so far remained a passive spectator when it comes to the human rights situation in the country. Victims of human rights violations and their relatives have largely been left unassisted in their fight for justice against AFP and the PNP elements who perpetrated the violations in the name of the Philippine government and public peace and order. So far, no member of the military has been arrested for human rights violations perpetrated since Aquino was sworn in.
No police or military commanders have been actively investigated for their suspected involvement in HRV cases.

Finally, children’s rights advocacy groups assert that genuine, thorough, and objective investigations into the cases of arrest, torture and killing of children and minors – as well the cases of harassment and general victimization of children by military and paramilitary elements — should be immediately initiated and pursued until they are justly resolved and the perpetrators are punished. Children are said to be every society’s hope for the future; but in the Philippines, children and minors like Asraf are not spared from suspicion and from the brutal methods of the so-called protectors of the peace.

As of this writing, Asraf remains behind bars, charged for being something not even in his wildest imaginings dreamed to be.