DUMAGUETE CITY – Farmers in Negros Oriental recently held a dialogue with the provincial governor to present their concerns ranging from hunger brought about by the lean planting season, to complaints on national programs and policies that included conditional cash transfer, large scale mining, energy exploration, and biofuels.

“Because of our current situation where many farmers are in extreme hunger, we are appealing for the help of our governor hoping that he could help us with our situation,” sugar farm worker Moreto Dolerio said in the local language.

He added that the long hiatus from employment for ordinary sugar farm workers, covering the months of June to December, would mean no viable source of income for the family. For this reason, Dolerio, who also sits as the provincial chair of NFSW –NO, revealed that many sugar farm workers would be on a frenzy trying to look for an alternative source of livelihood. Almost often, he said, most of the farm workers and their families would be left with nothing to eat for days.

Currently, the most common practice among farm workers affected by the seasonal work schedule include sending the women to the cities and town centers to look for jobs as house helps, while the men would try their luck with construction projects. Both, however, would not give them enough income to send their children to school, or to feed them, and would require them to leave the children at home to fend for themselves.

This results in various instances of endangerment of minors due to parents’ neglect. However, circumstance has led the parents to leave their children to be cared for by older siblings, otherwise the family would not be able to feed themselves. 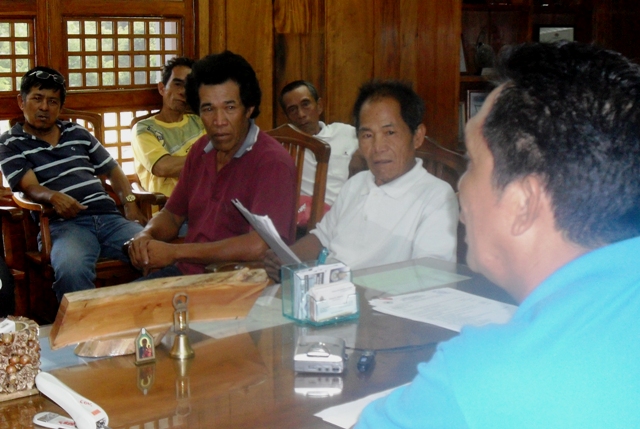 Farmers in Negros Oriental present their demands to the local government.(Photo by Ritche Salgado / bulatlat.com)

The group presented eight demands to the governor, namely: food subsidy; farm input subsidy; livelihood projects; intervention for sugarcane plantations to follow the set minimum wage and the inclusion of sugar farm workers in the social amelioration program (SAP); affordability and accessibility to National Food Authority (NFA) rice; inclusion of the farmers in the Pantawid Pamilyang Pilipino Progam of government; putting a stop to anti-farmer, anti-people, anti-environment projects; and aid in boosting the production of rice and corn.

The governor informed the farmers that there is not much that his administration could do about the problems since the budget of the province is limited and most of the requests covered in the petition pertain to projects of the national government.

He, however said that he may allocate P500,000 ($11,572) for livelihood projects for the group as long as the project that will be proposed would meet the requirements set by the Department of Interior and Local Government for allowable projects that can be funded by the province.

Regarding farm implements and on issues of increasing farm production, Degamo revealed that the province is already in the process of purchasing tractors that the farmers could borrow to help in tilling their lands.

Julie Ragay of Banika-Amihan told the governor that the group is particularly asking for the governor’s intervention to stop gas exploration in the protected nature park of Mt. Kanlaon by the Energy Development Corporation, as well as the jatropha plantation in South East Negros predominantly controlled by the Teves’s Herminio Teves & Co. Inc.

Ragay said these explorations and plantations have denied farmers their inherent right to use their land for planting crops, further denying them of their right to a sustainable livelihood and source of food.

However, Degamo said in as much as he is opposed to the jatropha plantation, he is still considering the project in Canlaon City because of the “many advantages that it promises to bring to the province.”

He said the power that will be generated by the project could help augment the power crisis in the province, further promoting growth by assuring potential investors of a stable power supply.

“Before we directly oppose a project, let us not just say that it is our principle that if we don’t like a certain project we would no longer listen how this project would help us,” he said. “That is why let us first see what this project in Canlaon would bring us.”

But the farmers were firm in their stand that the exploration not only violates the conditions of Mt. Kanlaon National Park, it also directly affects them as it traverses the land that their families have been tilling for generations, denying them of their source of livelihood and food. They said it is for this reason that many farmers are forced to seek menial jobs in the city, which is also not enough to provide for their family’s needs.

Although the talk with Degamo did not bear results that the group would have wanted, they were still hopeful that the promises raised by the governor would come into fruition and would not be mere political talk.

Dolerio said previous governors of the province were able to help them during their administration. Former Governor Emilio Macias helped fast track cases of poor farm workers, allowing them to get some of their demands on wage and benefits; while former governor and now Second District Representative George Arnaiz was able to provide them with farm implements.