“DAR officials are fully aware that Hacienda Looc is a contested land and that the fraudulent cancellation of their certificates is not equivalent to a conversion order,” KMP secretary general Danilo Ramos said.

MANILA – Fighting for their land and livelihood, farmers from Hacienda Looc camped outside the national office of the Department of Agrarian Reform (DAR), Sept. 19. 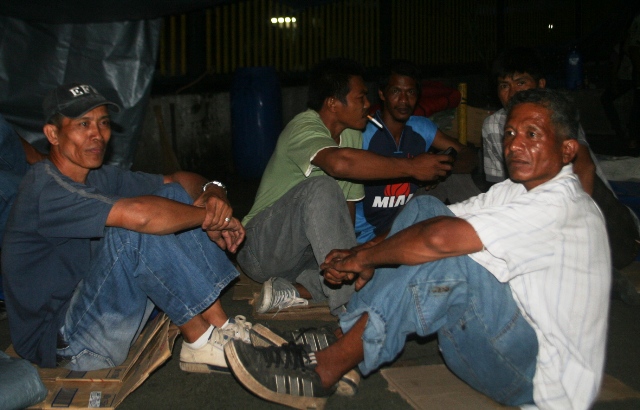 Farmers from Hacienda Looc set up a camp in front of the Department of Agrarian Reform (DAR). (Photo by Ronalyn V. Olea / bulatlat.com)

“The DAR and SM Land are obviously in collusion with each other to evict farmers and push through with the anti-people Hamilo Coast project in Hacienda Looc,” Armando Lemita, Umalpas-Ka spokesman, said. “The DAR allowed SM Land to grab our lands,” Lemita said.

Lemita said that during their dialogue with DAR, Sept. 13, officials failed to present any conversion order. “SM Land has arbitrarily converted more than 200-hectares of the contested land for the Hamilo Coast land development project,” Lemita said.

In 1990, the DAR granted a collective certificate of land ownership award (CLOA) and emancipation patents (EPs) to farmers in Hacienda Looc under the Comprehensive Agrarian Reform Program (CARP). After several years, the DAR cancelled the certificates after the government’s Assets Privatization Trust (APT) sold the whole hacienda to Manila Southcoast Development Corp. (MSDC), a member of the SM Group of Companies.

“DAR officials are fully aware that Hacienda Looc is a contested land and that the fraudulent cancellation of their certificates is not equivalent to a conversion order,” KMP secretary general Danilo Ramos said.

Based on the minutes from DAR obtained by Bulatlat.com, Undersecretary Anthony Parungao “advised” the farmers to file an intervention in the petition for revocation of conversion order of 1,200 hectares of land pending with the Supreme Court.

Farmers also said SM Land’s construction of condominium buildings along the foreshore land of Hacienda Looc is “illegal,” because no environmental compliance certificate has been issued.

The groups held a picket in front of the Department of Environment and Natural Resources (DENR) Sept. 20 asking the agency to investigate SM Land’s continuing construction of a high-rise condominium at the foreshore land of Hacienda Looc.

“The DENR knew that construction along foreshore land is prohibited, illegal, and criminal. We hold DENR officials accountable for allowing itself to be used by SM Land in this environmental havoc in Hacienda Looc,” Ramos said.

Ramos said the continuing land-use conversion and eviction of farmers in Hacienda Looc “show that the sham CARP is useless in defending farmers’ rights.”

Farmers will stay in front of DAR until Sept. 21.