MANILA – For decades, farmers of Hacienda Looc have been silently working on their farms to feed their families. Since Henry Sy’s Manila Southcoast Development Corp. (MSDC) started “developing” the 8,650-hectare hacienda, their lives have never been the same.

Resty Limua, 33, was born in Bulihan village, one of the three villages inside Hacienda Looc in Nasugbu, Batangas. He was told by his parents that his ancestors had been in that village since the Japanese occupation.

On March 4, at around 1 p.m., while Limua was tending to his goats, five security guards of Selective Security Agency hired by real estate company SM Land went to his house. Alone, Limua decided to hide behind a nipa hut a few meters away from his house. The security guards, not noticing Limua, gathered pieces of wood from the kitchen and burned down Limua’s house. 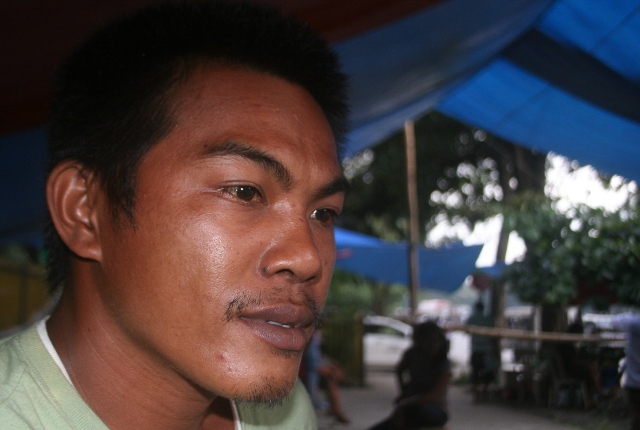 “Everything was burned, even our new bed and the P10,000 cash,” Lemua said in Filipino. Asked if he was sure that the men are security guards of SM Land, Lemua said he could never be mistaken because two of the five men are his distant relatives.

Before the incident, Lemua said he was repeatedly warned by the SM Land’s security guards to stop working on his farm. “They told me that my land has been bought. I told them I did not sell my land to anyone and asked them to present documents, they did not show me any paper,” Lemua told Bulatlat.com. Lemua said his family is one of the holders of the certificates of land ownership award (CLOA).

Lemua reported the incident to the police and filed arson charges against the security guards. He was asked to testify in a hearing once where he positively identified the perpetrators. In August, the case was dismissed. “They said I have no evidence. I saw them with my own eyes,” he said.

Lemua filed a motion for reconsideration but admitted he is not expecting to win. “Henry Sy’s money is working. He is influential,” he said.

Gaa said it was in 2009 when the nipa huts on that part of the hacienda were first destroyed by SM Land’s security guards. “There were 70 of them who came to tear down some 21 nipa huts,” he recalled.

They rebuild their nipa huts each time. At the moment, however, Gaa said he could not yet go back to his farm.

Gaa and his fellow farmers were also told that the SM Land already owns their land. “We are not leaving. Where would we get income? We have nowhere else to go,” Gaa said.

Gaa said that since the SM Land started its project in Hacienda Looc, members of the Philippine Air Force set up their camp in Calayon village inside the hacienda. Some 100 soldiers, Gaa said, have been roaming around the villages in the hacienda.

The soldiers, said Gaa, also prohibit farmers from working on their farms.

On Sept. 18, Sofronio Berber, 44, and some 30 farmers, were clearing weeds in his small banana plantation in Bulihan village when 14 security guards told them to stop.

Farmers in Bulihan village have revived “bayanihan,” the practice of helping each other in farm work, in response to cases of harassment.

“They took pictures of us. One of them was carrying an armalite. When one of our colleagues started to video tape the incident, the guard covered the armalite,” Berber said.

The three farmers have but one demand – to let them continue tilling the land. They all joined fellow farmers in a protest outside the Department of Agrarian Reform (DAR), Sept. 19.

“They should stop grabbing our land. It is not theirs but ours,” Lemua said.