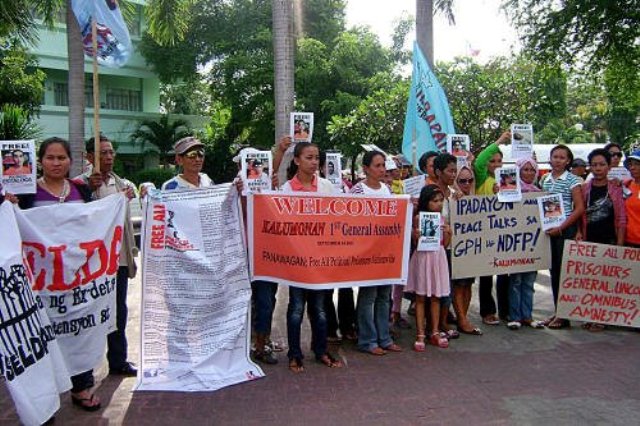 More than 70 attended the first regional assembly of Kalumonan, a Mandaya term for relative, (Families and Relatives of Political Prisoners) in Davao City, Sept. 16.

General means all political dissenters who were arrested, charged or detained for common crimes but in fact are alleged acts in pursuit of one’s political convictions should be released. Unconditional means no precondition shall be set before their release. Omnibus means that all charges and offenses are covered by the amnesty.

“Even without martial law, the fact remains that there are about 360 political prisoners in the country. They are individuals held in prison because their ideas are deemed by a government to either challenge or threaten the authority of the state,” Fe Castanares, a sister of a political prisoner and Kalumonan’s spokeswoman said. 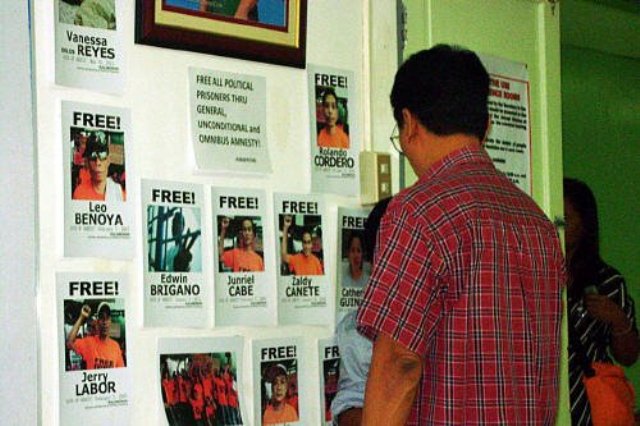 There are 24 political prisoners detained in various detention cells in the region.

Leo Binoya, Sr., Kalumonan chairman, whose son, Leo Binoya, Jr., has been detained for almost four years, said: “Our poverty, the injustices we experienced as farmers who almost had nothing to eat, led my son to fight for equity and justice. He believed that change was also necessary. These beliefs led him to the cause he was being jailed for. It is not fair for him to be called a common criminal.” 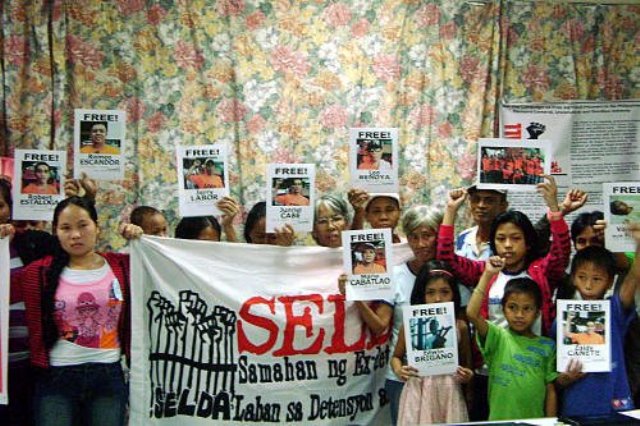 “The existence of political detainees is contradictory to a democracy that constitutionally guarantees and upholds civil rights and the right not to be imprisoned on the basis of political affiliation and conviction. And yet the fact remains that increasing number of individuals are being illegally arrested and detained by the State due to their involvement in a movement that seeks fundamental and meaningful changes in our society.” Castanares said.

Castanares said the continuing detention of their loved ones prompted them to form their organization with the aim of consolidating their ranks so as to campaign for the release of political prisoners.

“The shared circumstances, burdens and trials that the families and relatives of political prisoners are continually facing have opted them to seek one other for support and solidarity that resulted to the formation of Kalumonan which is an organizational expression of such solidarity”, Castanares said. 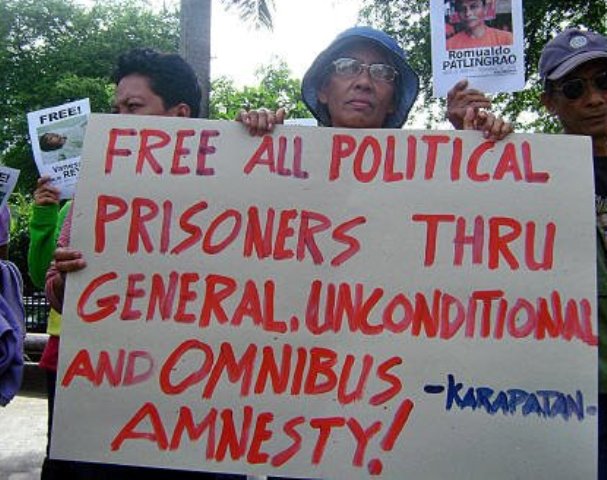 Meanwhile, Ching Montajes, whose daughter Maricon has been detained since June 2010, lambasted at Presidential spokesman Edwin Lacierda’s statement that there are no political prisoners in the Philippines.
“We would like to remind President Aquino that his father was once a political prisoner during fascist Marcos regime. Does this administration follow the militarist and inhumane acts of President Marcos? President Aquino’s policies resemble that of the late dictator – incarceration of political activists who are merely fighting for justice and genuine reforms in our society,” Mrs. Montajes said.

Maricon was a film student of the University of the Philippines (UP) Diliman who was arrested in Taysan, Batangas by 743 Squadron Combat Group of Philippine Airforce. She is now at the Batangas Provincial Jail for charges of illegal possession of explosives, frustrated homicide, among others.

“If Aquino granted amnesty to some 400 rebel soldiers, why can’t he extend amnesty to the political prisoners now?” asked Mrs. Montajes.

Samahan ng mga Ex-Detainees Laban sa Detensyon at Aresto (Selda) Southern Mindanao Region said the release of political prisoners, especially the remaining 13 detained consultants of the National Democratic Front of the Philippines (NDFP), will create favorable atmosphere for the resumption of peace talks between the Government of the Philippines and the NDFP in October.

“If the Aquino administration is true to its words in trudging the ‘daang matuwid’ (righteous path) and sincerity to the peace talks with the NDFP, it should have rectified its injustices towards the political prisoners and victims of human rights violations”, said Fe Salino, secretary general of Selda-SMR.

After the assembly, members of Kalumonan held a rally at the Centennial Park, Davao City.