Lessons from the flood

MANILA — It came as a surprise to receive a call from my sister in Bulacan last Thursday, since I was the one who was supposed to be sending her a birthday greeting then. She was worried about the floods in the nearby towns of Hagonoy, Paombong and Calumpit and was asking about what they could do to prepare for typhoon Quiel. She had heard about the possible release of water from the dams and its effects on these towns and nearby communities.

I remember one of the worst cases of flooding that I encountered in Bulacan was around the mid-70s, when we were forced to stay on the second floor of the house and people were streaming in from rafts cleverly fashioned from banana trunks. I have always associated banana trunks with flooding since then.

The ingenuity of Filipinos was again tested with the recent flooding from typhoons Quiel and Pedring.

According to the latest figures from the civil defense office, 58 people died, 28 are missing and around 360,000 are either stranded or in evacuation centers.

Authorities released water from dams in Luzon as they reached critical levels during the height of Pedring. The water release coupled with the volume of rainfall from Pedring caused waters to rise along the Pampanga river and its drainage systems. It was not surprising that waters will rise and cause floods. What was surprising was that the local and national governments seem to have been caught off-guard again by this disaster. 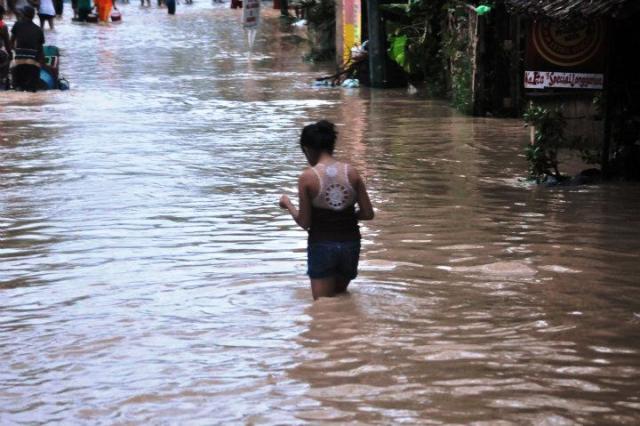 Undersecretary Graciano Yumul told the Senate that the Philippines is the Vatican of disasters and that these strong typhoons are the effects of climate change. Yet given that we are the center of disasters especially those that are related to flooding, the question is why does it seem that we are so ill-prepared to respond to these?

We should have learned from our 2009 experience from Ondoy and Pepeng. There seems to be confusion over the protocols to be followed regarding the release of water from dams. The touted Doppler radar systems, the weather reporting system and the final decision making are still largely opaque to the public and confusing for local governments and disaster councils.

Another point is the privatization of our hydroelectric dams. The competing interests of holding water to generate electricity and releasing it early enough puts dam operators at a quandary. During critical situations where public safety is at stake, it seems that the government cannot compel these private corporations, which are primarily concerned with earning profits more than public safety, when to release water from dams.

Local governments from Pangasinan and Bulacan called on Malacañang to review flood-control protocols, blaming outdated rules and inefficient or lack of flooding infrastructures for their provinces’ vulnerability to flooding. PAGASA, the government weather agency, is only tasked to monitor water level of dams in the country. If water reaches the critical level, only then will PAGASA advise the private companies to release water.

It is in this light that the government should not only nationalize these dams for energy security but they should also take back the function of water management of dams. Large dams and their management should be there not only to provide electricity but also ensure the safety of the people downstream. All large dams in Luzon except for Angat dam are now owned by private and foreign companies.

My sister’s frantic call was an eye opener. Communities do not know what to do when flood water rise. They tend to panic unless good procedures are in place both in the local and national levels. The situation is aggravated in Central Luzon especially in Bulacan and Pampanga where land subsidence has been observed to have been occuring since the past decades. Together with haphazard land use policies that allowed subdivisions to sprout where there was once rice fields, floodwaters do not easily drain towards the sea as they did several decades ago.

We have had fire drills and earthquake drills in the past but I have yet to encounter typhoon or flooding drills. Do we have hazard warning systems like the typhoon signal system for flooding that trigger automatic responses like suspension of classes, evacuation, relief mobilization and the like? How effective are the government’s information dissemination in this regard?

Knowing that climate change is a factor should have already made the government prepare and execute hazard mitigation plans such as structural improvement of slopes and banks, improvement of drainage systems, appropriate land use plans and rehabilitation and protection of our forest lands and watershed areas. We should learn from this experience and stop being ill-prepared for disasters as whole communities and lives are at stake.

Dr. Tapang is the chairperson of AGHAM-Advocates of Science and Technology for the People.