Migrant groups have launched an on line campaign for the scrapping of the Aquino government’s affidavit of support (AOS) requirement for those going to Dubai and the United Arab Emirates (UAE).

The AoS is a documentary requirement certifying that an OFW dependent who will be traveling with a visit visa has the support of his or her relatives working in the host country.

According to the Khaleej Times, the Philippine consulate in Dubai imposed the new requirement last July 12.This year OFWs are required to be present when applying for an AOS even if they file their visit visa through travel agencies.They are also required to have their affidavit of support in red ribbon. 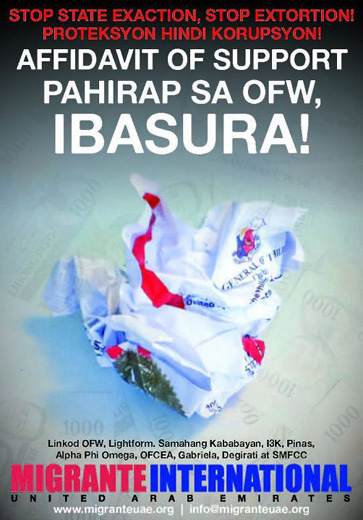 Vice Consul Geronimo Suliguin said, in the report, that a list of individuals who have been issued the affidavit is furnished to the UAE Immigration officials at the Dubai International Airport on a daily basis to ensure that OFW relatives visiting Dubai are carrying bona fide documents from the consulate.

Migrante in the Middle East demanded that President Benigno Aquino III and Vice President Jejomar Binay who also stands as the presidential adviser on OFWs concerns, review and order the cancellation of the AOS requirement.

Only the Philippine consulate and embassy in the UAE are authorized to issue an AOS with a corresponding fee of 100 dirhams (roughly equivalent to P1,200 or US$28).

John Leonard Monterona regional coordinator said the AoS documentary requirement was implemented on August 2011, noting that Pres. Aquino was then barely a month in office.

“The AoS was a brainchild of the Macapagal-Arroyo administration and its immigration officials, but the Aquino government continues to implement it,” he said.”This is a betrayal of Aquino administration’s supposed policy thrusts – against corruption, for one; and against adding to the burdens of OFWs. This AOS requirement does little to support the campaign against illegal recruitment and human trafficking; what it does is bolster corruption,”he said.

“The online petition is part of our month-long campaign against the AoS requirement. We are determined to gather thousands of signatures,” said Nhel Morona, Migrante-UAE secretary-general.

A copy of the petition and signatures will be sent to President Aquino, the Department of Justice, the House of Representatives, and the Bureau of Immigration and Deportation (BID) through Migrante International in the Philippines.

Anti-trafficking measures not at expense of OFWS

Migrante International chairperson Garry Martinez questioned the consulate’s move, saying that the Dubai government itself does not require visitors from the Philippines to show an AOS.

”It is another added cost and inconvenience to our OFWs and their visiting relatives. This is just a money-making scheme at the expense of OFWs; they’re the ones who have to pay for the application of the AOS. This is no different from mulcting, and it’s no coincidence that the holiday season is approaching and Dubai OFWs are expecting relatives to visit,” he said.

Martinez pointed out that the Philippine consulate’s measures to prevent illegal entry of Filipinos in Dubai should not be at the expense of OFWs. He said the post should do its duties without forcing OFWs to shoulder additional expenses.
OFWs in Dubai have already been protesting against the issuance of the red-ribboned notarized AOS by the two diplomatic missions in the United Arab Emirates.

Migrante-UAE secretary-general Nhel Morona claims that the document has bred corruption among Bureau of Immigration (BI) agents stationed in exit points in the Philippines. “We have received complaints from FWs whose relatives said they were made to pay P15,000 (Dhs 1,363 or US$ 339) and P30,000 (Dhs 2,727 or US$698) at the Ninoy Aquino International Airport (NAIA) despite having presented their AOS documents,” Morona said.

“We want protection for OFWs, not more arbitrary fee impositions,” he said.