IBAAN, Batangas – As a boy, he was ordinary. However, he died an extraordinary man mainly because he chose a life that touched so many ordinary people who came to love him in return.

Ka Roger, long-time spokesman of the Communist Party of the Philippines, died of a heart attack on June 22 at the age of 64. The CPP announced his death last week.

The caravan stopped by Turbina, Laguna and went straight to Talaibon village of this town, a third class municipality, some 110 kilometers south of Manila. Passengers got off and were met by hundreds of people waiting at the humble residence of Ka Roger’s parents. Felicidad Rosal-Inandan, Ka Roger’s younger sister, welcomed the visitors and offered them noodles. 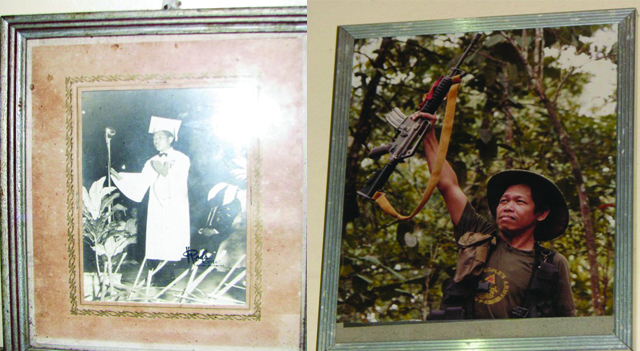 Photographs of Ka Roger at their home.(Photos by Ronalyn V. Olea / bulatlat.com)

At the center of the living room hung a portrait of Ka Roger, his right hand holding a rifle raised over his head. Atop a small table is another photograph, the young Ka Roger in toga, delivering a graduation speech. He was a consistent honor student, according to Felicidad.

A man who introduced himself as a brother in law of Ka Roger was playing an audio recording of one of his interviews. “He is so much alive, isn’t it?” he told the visitors who were looking at more photographs laid at the sofa chair.

Overwhelmed by the number of visitors, Felicidad decided to invite the visitors to the village’s covered court. Some 300 visitors from various provinces in Southern Tagalog marched from the house of Ka Roger to the covered court. Hundreds of local residents joined them.

Ka Roger was born in the farm. His father, Pablo Rosal, was a tenant serving a small landlord and her mother, Crispina Crusat, augmented the family’s income through sewing.
“We spent most of our time in the farm,” Felicidad recalled. “On weekends, he worked on the farm even when he was already in college,” she said of his brother.

Ka Roger worked as a servant at his landlord’s household from grade school until high school.

He found joy in playing softball, said Felicidad. It was his favorite during summer. “He would volunteer to serve as the umpire,” Felicidad said. 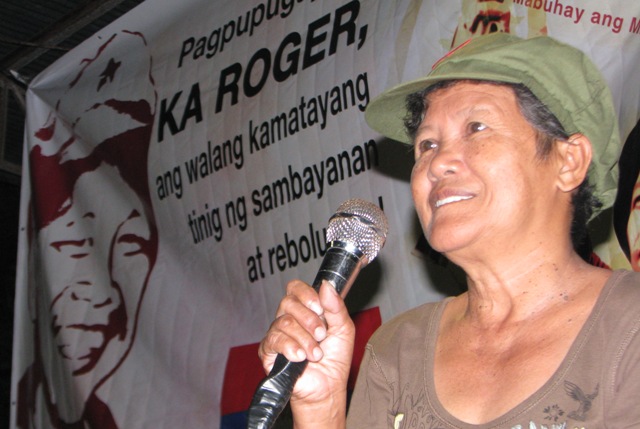 Felicidad said Ka Roger was a religious person. He would lead the youth in the neighborhood in praying the rosary.

“He played the guitar. Later, he learned to play the harmonica. He loved to sing, too,” Felicidad said.

As a student, Felicidad said, Ka Roger was not studious but would always excel in class.

To support his studies and augment the income of the family, Ka Roger peddled mosquito nets and blankets. In 1971, he entered college at the Golden Gate Colleges in Batangas City.

It was during his college days when he was exposed to activism.

“Ka Roger was one of our recruits,” Romeo Luneta said during the tribute. According to Luneta, he was then part of the Kabataang Makabayan (KM) organizing team from the University of the Philippines (UP) that was dispatched to Southern Tagalog.

In a video prepared by Artista at Manunulat ng Sambayanan (Armas)-Raquel Aumentado chapter and shown at the program, a man related that Ka Roger, after listening to one of their demonstrations in Batangas City, approached them. “He had many questions. We told him to go to our headquarters. The next day, he brought some vegetables for us,” the man said. “Unlike other students, Ka Roger really looked like a peasant.”

From then on, Ka Roger became a conscientious activist. He later got involved in union organizing in the province. He was arrested in July 1973. 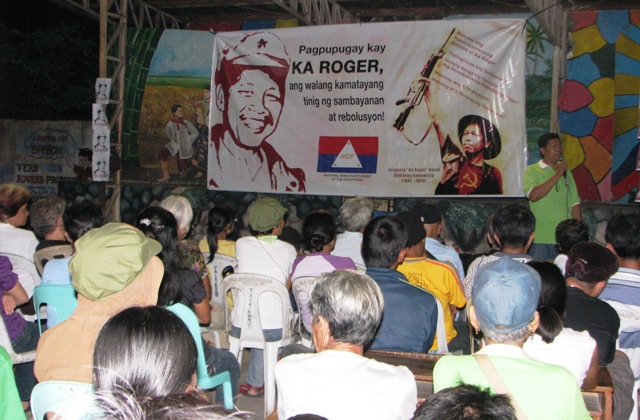 Residents of Talaibon village, Ibaan, Batangas and activists from different parts of Southern Tagalog gather in a tribute to Ka Roger.(Photo by Ronalyn V. Olea / bulatlat.com)

“He was working on the farm when soldiers came. They told us they would just invite him for a talk. He never came back that day,” Felicidad recalled. He was shortly detained at a military camp in Kuomintang, Batangas City and was later transferred to Camp Vicente Lim in Canlubang, Calamba, Laguna.

In November of the same year, Ka Roger escaped prison along with nine other activists.

Speaking in the video documentary, Rafael Baylosis, an activist detained at Fort Bonifacio during martial law, said Ka Roger’s escape inspired other political prisoners to do the same.

After the escape, Felicidad said Ka Roger went to the hills.

Speaking in the video documentary , a man who introduced himself as Ka Ricky, a New People’s Army (NPA) guerilla, said he met Ka Roger in Mindoro.

For one year, Ka Ricky worked with Ka Roger organizing peasants. “He was a loving, understanding and naughty cadre,” he said. “He would carry his own belongings, even if he was already sick.”

Ka Ricky recalled that when a young female NPA guerilla told them she was dying to meet Ka Roger, Ka Roger asked if she would recognize Ka Roger’s face. The woman said she was not sure but said she imagined Ka Roger to be a tall man. Ka Roger said, “Indeed, he was tall and with smooth skin, too.”

Ka Ricky said he did not find out if the woman NPA guerilla later learned that she was talking with Ka Roger himself. “He was so humble no one would think he was a high-ranking officer of the party,” Ka Ricky said.

Felicidad related, “The soldiers fetched our mother from the house. I and Ate Nicetas came along. We rode a chopper to Camp Vicente Lim. There, they released Andrea.”

Felicidad said she heard her brother on the radio, condemning the incident. The military had wanted to pressure Ka Roger to surrender. He did not and instead, exposed the incident to the media.

Felicidad was able to visit her brother in the mountains almost every year until 1997. When security tightened, their communication was limited to phone calls. She last spoke to him in 2006, when their mother died.

She said she aches to visit his grave but she was not informed of this detail due to security reasons.

“I never understood the intricacies of the revolution but I know that what he did was not for himself but for the majority,” Felicidad said.

Their neighbors who listened to the tribute clapped their hands at the end of every speech honoring Ka Roger and the revolution.

It seemed like an ordinary program sponsored by village officials. The only difference is that when those who attended spoke about and praised Ka Roger, the NPA and the CPP, it appeared to be so natural and spontaneous it was as if they were not talking about a most wanted man in the order of battle of the AFP.