Also, in Zambales, too many soldiers are deployed now “to ensure the continuous mining operations led by friends of Noynoy (Aquino), Abalos and Arroyo,” said Joseph Canlas of the Alyansa ng Magbubukid sa Gitnang Luzon (AMGL). He reminded the farmers who “occupied” Mendiola that it had taken a law, RA 7227, for the government to implement a demolition and drive away the farmer-residents of lands vacated by US military troops. The government built a special economic zone on the said land.

Other laws for building similar ecozones, such as the APECO in Aurora, are currently displacing thousands of farmers and fisherfolk in the area. “The Armed Forces of the Philippines (AFP) and the Philippine National Police (PNP) are serving as lead agencies or instruments of the government in kicking off the lands earmarked for APECO the residents on it,” said the Pamana (provincial alliance of peasants in Aurora).

A spokesman of KMP from Bicol said at Mendiola that in their village alone, 85 farmers had been tortured and 27 were killed in the past six months.

In Laguna, peasants and other marginalized sectors confronted the officials assigned at a military detachment located in Sitio Kabute and Brgy. Pulo in Cabuyao, before heading to join other peasants camping out in Mendiola. The said military detachment in Cabuyao was reportedly established immediately after the demolition of shacks in the said area.

“To intimidate the locals and drive them away from their land, military elements are made visible. Detachments are built to paralyze the progressive forces in the area,” said Glen Malabanan, secretary-general of KARAPATAN-Southern Tagalog.

Thousands of peasants led by Katipunan ng mga Samahang Magbubukid sa Timog Katagalugan (KASAMA-TK) launched on Oct 17 their week-long protest “to expose and condemn the aggravating state of the agriculture sector under the United States (US)-influenced Noynoy Aquino administration.” The group vowed that they “will banner campaigns against land disputes and massive land-grabbing in different parts of Southern Tagalog.”

“In the various provincial rallies held in Southern Tagalog, it became clearer to us that our struggle for land is up against an inutile and haciendero Aquino regime. In protecting his class and his class interest, his government has come to a point where they’re using violence even against the unarmed,” said KASAMA-TK spokesman Nestor Villanueva, after tensions gripped their picket when members of the 202nd Infantry Battalion threatened to use their firearms against the protesting groups.

These are just some of the examples from Luzon. In the Visayas, where over 300 peasants from Santa Catalina, Bayawan City, Zamboanguita, Dumaguete City, Guihulngan City, Bais, Manjuyod and Kanlaon City converged near the Silliman University Medical Center on Oct 21 and marched to the Boulevard, their demands for land overlapped with their demands for justice for their slain leaders. They aired demands for the passage of the genuine agrarian reform in the same way they urged for “the scrapping of oppressive State practices.” 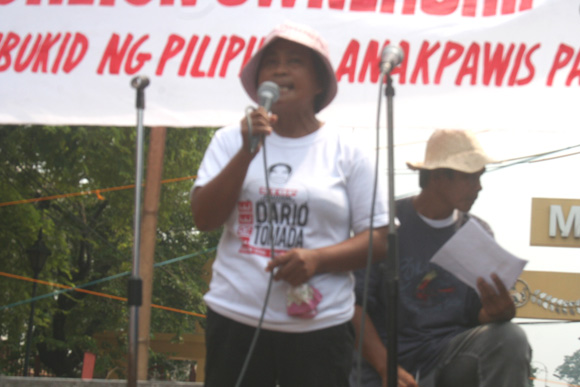 At Mendiola Bridge in Manila, Amy Tomada, spokeswoman of Free Danny Tomada movement (Oscar Villeza-Manila City Jail/Felisidad Caparal-Northern Samar), declared in Filipino during the Oct 21 rally that “We shall press ahead with the struggle of the political prisoners while they continue to struggle even while in prison and barred by steel fences.”

Among the issues raised by Visayan farmers in commemorating the peasant month was food insecurity, since “the government has ignored calls for the long-delayed genuine agrarian reform and has instead opted for the extension of the anomalous CARP.”

Carlos Solano, chairman of peasant federation KAUGMAON in Negros Oriental, said that “in times of extreme hunger, the State chooses to favor the rich landlords and the bureaucrats as seen in southeast Negros where the bio-fuels production is prioritized instead of the agricultural needs of the farmers.”

In Kanlaon and Guihulngan cities, a large-scale project also threatens the livelihood of peasants toiling in the hinterlands, said Solano.

In Sta. Rosa at the town of Murcia in Negros, the farmers’ ripening palay were reportedly bulldozed and replaced by Napier Grass, so the cows in a hacienda owned by the Eliman and Arguelles families could feed on it, said Greg Katin, spokesman of KMP-Negros at the peasant rally in Mendiola.

In Northcentral Mindanao, their caravan dubbed as “Lakbayan” (literally nation’s journey) is jointly organized by Kilusang Magbubukid ng Pilipinas (KMP), AMIHAN Northern Mindanao, Kalumbay Regional Lumad Organization, Kahugpungan sa mga Mag-uuma sa Bukidnon (Kasama-Bukidnon) and Misamis Oriental Farmers’ Association. Contingents of Lakbayan began their journey from Quezon in Bukidnon, and from Lugait in the west, and Gingoog City of the east of Misamis Oriental. They camped out in front of the Capitol Grounds of Cagayan de Oro City in Misamis Oriental, where they stayed for the night and held the concluding program the next day.

As with national averages, three in four peasants in these parts of Mindanao reportedly do not own the land they till, while thousands of farmworkers employed by multinational corporate plantations are forced to live in abject poverty.

Farmers’ and indigenous peoples’ groups complained of continuous and massive landgrabbing headed by multinational corporations, which are being abetted by the government. When peasants resist, bloody conflicts ensue as what happened when farmers of Bukidnon and Misamis resisted efforts to drive them away from lands they have been tilling for decades, to give way to expanded plantations for banana, pineapple and palm.

“With a genuine agrarian reform program, the resulting poverty of landlessness can be resolved,” said Anakpawis Partylist Representative Rafael Mariano at the rally in Mendiola. He assured the gathered farmers, workers, youth-students and other peasant advocates, that “we have sufficient capital if the Philippine government will not fritter it away in debt servicing and foregone duties and tariffs due to liberalization.”

Mariano pointed to the P353-billion ($8.2 billion) of the national budget that goes to debt servicing, and to what should have been higher revenues if the government brings back tariffs and duties, and renationalize and operate without corruption public utilities such as Petron and others.