Sidebar: A saga of all-out euphemisms vs peace, the Moro and the ordinary people

MANILA – The script and the action do not match. The Aquino government flaps its wings like a dove but its actions remain even more hawkish.

These, in a nutshell, are the reactions of various progressive peoples’ groups to announcements aired by President Benigno “Noynoy” Aquino III and his trusted officials regarding peace talks, and this government’s seemingly opposite instructions to its troops on the ground.

The MCPA describes Aquino’s ‘All Out Justice’ as just “a veiled All-Out War.”

Given Aquino’s “tacit directive” clothed in a supposed all-out justice, the Armed Forces of the Philippines (AFP) has begun “pursuit operations against criminal elements,” as signaled by massive air strikes in Zamboanga Sibugay in the South.

The AFP has admitted to sustaining 19 casualties last week in their Basilan operations. Though lapses in their operations are being pointed out and studied now in an investigation at the Senate, an all-out war or military solution has also been pushed more strongly since last week, especially by the followers and loyalists of “two militarist presidents of the Philippines, Marcos and Estrada,” as the MCPA described Senators Juan Ponce Enrile and Panfilo Lacson. These two, they said, are “incorrigible fascists and unrepentant human rights violators.” 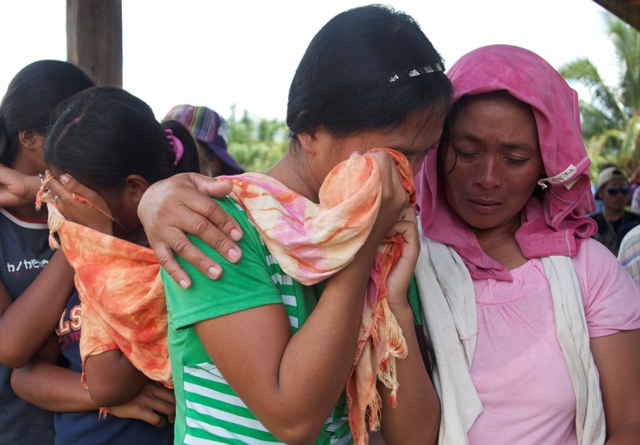 Women in Mindanao crying over their relatives who are ‘murdered and harassed’ during an alleged AFP operation. (Photo by Karlos Manlupig / bulatlat.com)

“The civilians are suffering. They are crowding the evacuation centers and they have been forced to abandon their livelihood,” Jaafar said.

Jaafar still expressed faith on the Aquino government’s “seriousness in solving this (Mindanao) problem,” but he urged Congress, both the Senate and the House of Representatives “to help the Aquino administration.” He also urged the AFP to “follow government policies.”

AHJAG is similar to the Joint Agreement on the Safety and Immunity Guarantees (JASIG) between the GPH and the National Democratic Front of the Philippines (NDFP).

The ceaseless military attacks on towns populated by Moros or operated on by the communist guerrillas in Mindanao have, as in the past, “not solved anything.” Particularly in attacking the Moro, “It only fans centuries-old biases against the Moro people,” said Jigs Clamor of Karapatan in a statement. 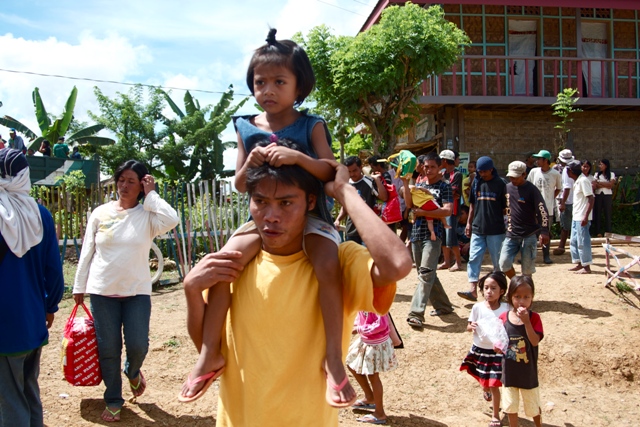 Some 48 families evacuated from North Cotabato Oct 22, after the AFP reportedly killed a farmer and harassed his family and neighbors in an alleged encounter with the NPA. (Photo by Karlos Manlupig / bulatlat.com)

It also only added up to an already long list of human rights violations. Since Gloria Macapagal-Arroyo declared Basilan as in a “state of lawlessness” in 2001, for example, 80 of the 500 civilians then indiscriminately arrested and detained remain languishing in jail to this day, Clamor added.

Military solutions like all-out war “has been historically proven to be ineffective and anti-people,” Liongson of the MCPA observed.

To build a “broad constituency for the peace talks among the government and communist and Muslim rebels,” Bayan Muna Rep. Teddy Casiño launched a “Yes for Peace” campaign in Cotabato last Tuesday. Casiño was in Kidapawan at the time to attend the funeral mass for Fr. Fauto Tentorio who was gunned down last week by suspected paramilitary groups.

The “Yes for Peace” aims, for starters, to gather 18 million signatures by Feb 25 next year, the 26th anniversary of the People Power uprising.

Casiño called on the AFP to stop the bombing of villages in towns of Mindanao, because it is “no different from the bombings of airports and public places by suspected Muslim terrorists.”

“Indiscriminate bombings of villages and communities affect the civilian population more than the combatants. If there are to be military actions, it should be very limited, targeted and make use of appropriate force,” Casiño reasoned.

Resuming peace talks is also seen as necessary and more urgently needed now, given that only in these talks can the long standing peoples’ issues be discussed and addressed, Liongson of MCPA said. He added that Aquino needs only to look at his 14-month administration’s sorry record so far: 57 extra-judicial killings highlighted by the recent murder of Fr. Fausto Tentorio, the public’s seeming approval of the recent NPA attacks against three destructive mining companies operating in Surigao, and the renewed AFP-MILF armed confrontations in Basilan, Zamboanga Sibuguey and Lanao.

For the Communist Party of the Philippines (CPP), Aquino’s talks of embracing peace negotiations are just “political gimmickry.” They charged that beyond these gimmicks of Aquino and his spinmasters, it is actually evading “the serious issues of national self-determination that lie at the core of the Moro people’s revolutionary resistance.”