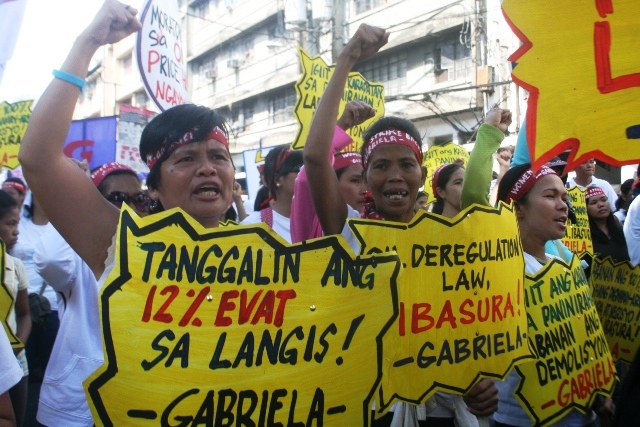 Women, including Bihag, stormed Mendiola bridge to show President Benigno S. Aquino III their anger and disgust for his continued support for big corporations such as the oil cartel at the expense of the ordinary Filipino family.

“We are here today to strike back against the continuing oil price hike, continuing demolition of communities of urban poor families,” Bihag told Bulatlat.com

According to Lana Linaban, secretary general of Gabriela, on Oct. 28, 1983 10,000 women marched against the Marcos dictatorship. This began the tradition of militant women’s protest actions every October 28 against various issues that plague women. For this year’s protest, hundreds of women, Including mothers carrying their children, joined the march from Morayta to Mendiola bridge.

Women protesters removed the barricades covering the gates of Mendiola bridge. Caricature of Aquino, the US and oil companies were then posted at the gates, mothers expressed their anger by throwing mud at the caricature. 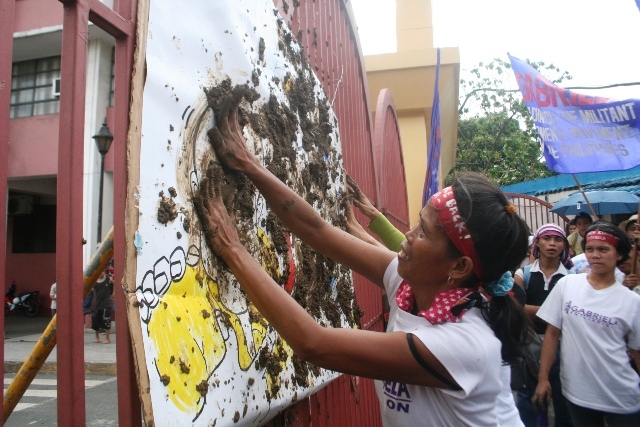 Mothers throw mud at the caricature of Aquino, the US and oil companies posted at the gates of Mendiola bridge.(Photo by Anne Marxze D. Umil / Bulatlat.com)

“Women, especially mothers who try hard to budget the expenses of the family, are suffering because of the high prices of basic commodities, which, in turn, is being pushed up further by f the continuing increases in oil prices. But the Aquino government continues to neglect the welfare of majority of women. He allows big oil companies to rake in profits at the expense of the poor,” Linaban said during the protest.

Linaban lambasted Aquino’s rejection of buying back Petron. “It is very clear from Petron’s huge profits that the company is doing good business but at the expense of the people. If the company is owned by the government, it could help bring down oil prices and the people will benefit.”

Linaban added that the Aquino government only big businesses more than the people. According to Linaban Petron’s profit increased from P 6 billion ($139 million) last June to P 7.6 billion ($176 million) this September. She said,“Their profits increased by almost P 2 billion in the third quarter. These three months were characterized by calamities brought about by the typhoons and floods. Yet, it still had the temerity to profit from the misery of the people whose livelihood further sank into crisis. This is plain opportunism, added to the fact that the oil cartel has not been able to answer the accusations of overpricing.”

Like Aquino, the past governments promised change, Linaban added, but no one dared to review, amend or repeal the oil deregulation law. “The dictator has long been dead but the economic crisis and political repression spurred by the continuing subservience to imperialist dictates of succeeding governments remain alive until now. The worsening crisis is pushing more women to strike back!” 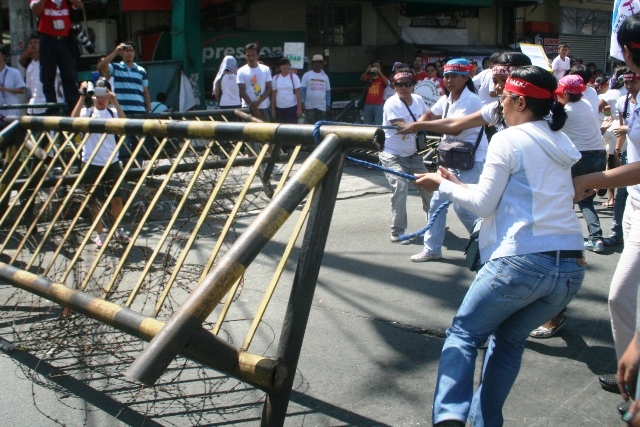 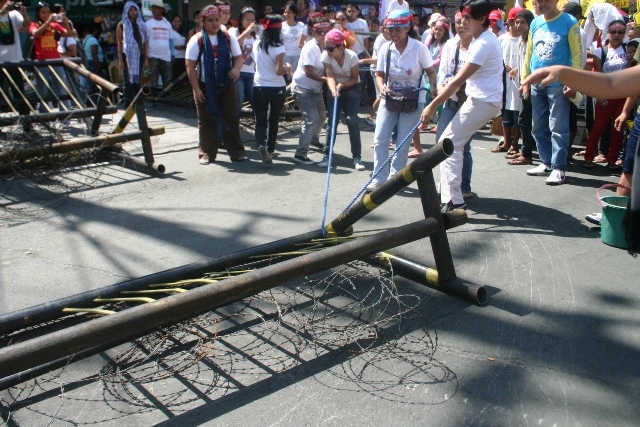 For women coming from urban poor communities, Aquino’s promise of change for the poor did not ever come true. “It was more than one year that Aquino promised to give housing for the poor. But instead of providing houses, he ordered the demolition of urban communities,” said Neri Guerrero, chairwoman of Samakana or Samahan ng Maralitang Kababaihang Nagkakaisa.

Guerrero cited the demolition of the community in North Triangle in Quezon City which the Ayala Corporation is eying to develop. Instead of providing basic social services like housing, the Aquino government is making money out of it, Guerrero said. “And where would the president put the urban poor? To the relocation site farthest from Manila where there are no social services and no other means of livelihood. How can poor families live there?”

Guerrero also lambasted the Conditional Cash Transfer (CCT) and Public-Private Partnership (PPP) programs of the Aquino administration. “We don’t need dole-outs. What we need is a permanent job with stable income.”

Linaban pointed out the irony that the government allots a large chunk of the national budget for the payment of debts to international institutions like the World Bank while social services that go directly to the people, at least theoretically, are subjected to budget cuts. “The World Bank throws the lifeline that is the CCT but in the end it is the same lifeline that will strangle the people, and the Aquino government is ensuring that the noose is tight. Results of a recent Social Weather Stations survey shows that 20 percent of Filipino families have experienced hunger—a record high for the Aquino administration. This is a clear indication that the government’s poverty alleviation program that is CCT is useless as it is deceptive.”

Linaban stressed, “The CCT is a dole-out program that further pushes people to vulnerability and dependency. It is an opium that eases the pain of poverty and paralyzes people to subservience; it does not cure the disease.”

“Contractualization is a bane to all workers. It has meant lower wages, no benefits, consistent threats of being laid off from work. And no union rights,” Nenita “Nitz” Gonzaga, vice chairwoman of Kilusang Mayo Uno for women’s affair said.

Women workers also marched to Mendiola bridge calling for an end to contractualization.

Gonzaga said contractual women workers suffer as they are being treated as commodities. Gonzaga cited as an example the experience of Rory who worked as a saleslady in SM, the biggest department store chain in the country owned by Henry Sy. “In SM department stores, as well as other department stores, the company will not hire you if you are not beautiful. We have to wear thick make-up. Our skirts are so short. It’s as if we are the ones who are on sale,” Rory said.

“The Department of Labor and Employment (DOLE) never sided on workers. There are many issues that workers are facing but DOLE does not do anything about these. That is why we need to organize women workers for them to fight for their rights,” Gonzaga said.

Linaban called for unity to fight against corporate greed. “The World Bank, oil companies, mining companies and other foreign corporations that venture in the country at the expense of the people’s interest all embody the corporate greed which is now subject to condemnation globally by the Occupy Movement. But it is not enough to merely express anger and condemn the corporate greed of the 1 percent who has economic power. As part of the 99 percent, we have the voice and the political power of collective action that can turn the economic tide. And that is precisely what the women of Gabriela struggles to achieve,” Linaban concluded.