In the light of the worsening hunger and poverty and given the already soaring prices of commodities, it is feared that the triple threats of price hikes may well turn out to be the “straw that will break the camel’s back,” said Lana Linaban, secretary-general of Gabriela.

These transport groups that petitioned the LTFRB for fare hike include the Pasang Masda, Acto, LTOP, Altodap, and 1Utak. They cited the hike in prices of oil products as justification for their fare hike petition.

“These so-called transport leaders have lost the moral high ground to demand for a fare hike to ‘help’ the drivers,” said San Mateo.

San Mateo slammed the said fare hike petition, which is limited to just National Capital Region, Region 3 and Region 4, as “divisive and deceptive.”

“Majority of drivers all over the country are feeling the pinch of oil price hikes, especially since in other provinces such as in the Visayas and in Mindanao, diesel and gasoline sometimes cost P5 ($0.12) per liter more compared to the already overpriced rates in the National Capital Region,” San Mateo said.

Piston reiterated that the better relief for majority of drivers and commuters would still come from suspending the Value-Added Tax (VAT) imposition on oil, withdrawing the P9 ($0.21) overpricing and doing away with the oil deregulation law altogether. San Mateo dared the Aquino government to do these and provide relief to all drivers and Filipinos.

Last Friday, an alliance opposing toll fee hikes condemned the public consultation held by the Toll Regulatory Board (TRB). Tutol-Slex said the meeting is “a bull-headed attempt to ram the newly-proposed toll fee hikes down the peoples’ throat.” 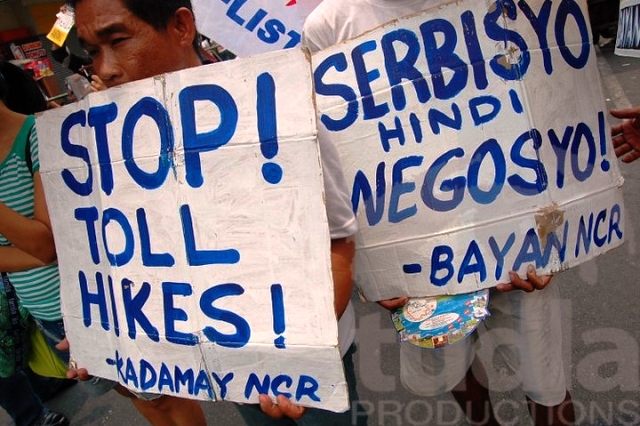 Toll hikes are blamed as one of the causes of price hikes of commodities and transport. (Photo by Tudla Productions / bulatlat.com)

“What kind of a public consultation is this? The government officials in the TRB board of directors, who are supposed to uphold the public’s interest on this issue, did not attend. The stakeholders were not furnished with a copy of the petition for a toll hike, making it hard for us to prepare to refute pro-hike arguments,” said Sammy Malunes, TUTOL Hike spokesperson.

The contract between the government and the private corporations managing the expressways states that the corporations may increase toll fees every three years after holding public consultations on the proposal.

Ramon Te, councilor of the City of Caloocan and TUTOL Hike co-convener, warned against the “ill effects” of implementing another toll fee hike. He urged local government officials to speak up against the toll fee hikes, saying he is aware of how their constituents “are suffering from the increase in the prices of basic goods and services caused by the toll hikes.”

“Our small vendors will be selling more expensive rice, vegetables and other agricultural products to a public whose wage has remained almost constant through the years. They will most likely end up with less sales and therefore less income,” he explained.

Women from Gabriela held two protest actions Thursday to also protest the impending power rate hike and the fare increases looming over Filipino consumers as a result of the latest P2 ($0.05) oil price hike this week. Gabriela dubbed the looming and the scheduled hike as “triple threats” to families’ very survival.

In the light of the worsening hunger and poverty and given the already soaring prices of commodities, it is feared that the triple threats of price hikes may well turn out to be the “straw that will break the camel’s back,” said Lana Linaban, secretary-general of Gabriela.

About a hundred protesters from Gabriela trooped to a Manila Electric Co (Meralco) branch in Kamuning on Thursday to symbolize their “disgust” over the power rate hike starting this month.

“Everyday, women have to contend with a dwindling family budget and agonize over how to make both ends meet. This month’s electric bill will surely mean an even lesser budget for food and other basic needs,” said Linaban.

The women’s group warned that come the next survey on hunger, “it will remain as bad, if not worse, despite the holiday season.”

From Meralco, Gabriela members marched to the office of the Land Transportation Franchising and Regulatory Board (LTFRB) along East Ave. where some transport groups filed last Monday a petition to increase jeepney fares.

“The last thing we need is being forced to dig deeper into our already savaged pocket. If the transport groups who filed the petition really understand us commuters, they would not have pushed through with their petition,” cried Linaban. 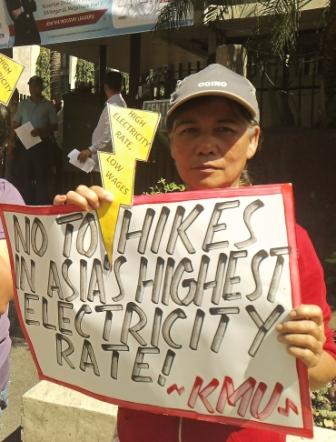 Gabriela urged the said transport groups to protest instead “the complicity between the Aquino government and the oil cartel.” Linaban urged the transport fare hike petitioners to “concretely demand instead a moratorium on oil price hikes, the removal of 12-percent E-Vat and the scrapping of the oil deregulation law.”

Linaban called on the said transport groups to help them in the campaign “to pave the way for the nationalization of the oil industry.” She said that as commuters, Gabriela is mulling over the possibility of filing a sort of counter-petition to that filed by said transport groups at the LTFRB.

Before leaving the premises of LTFRB, Gabriela also chided the Aquino government for doing nothing against the “triple threats” to Filipino families’ survival.

“Unlike the Aquino government, we women cannot just watch what’s happening and do nothing,” Linaban said, citing the increasing numbers of Filipinos going hungry because of soaring prices of goods and services.

At about the same time the women were urging the Aquino government to stop the “triple threats” of price hikes from “breaking the camel’s back” or threatening the survival of Filipino families, the workers were holding a picket protest in front of the head office of the Manila Electric Co. in Pasig.

Workers led by labor center Kilusang Mayo Uno (KMU) condemned the increase in electricity rates this month, saying the Aquino government should stop Meralco and its generation sources from further increasing the highest power rates in Asia. The labor group urged Aquino to increase instead the country’s wage levels, which is one of the lowest in the world. 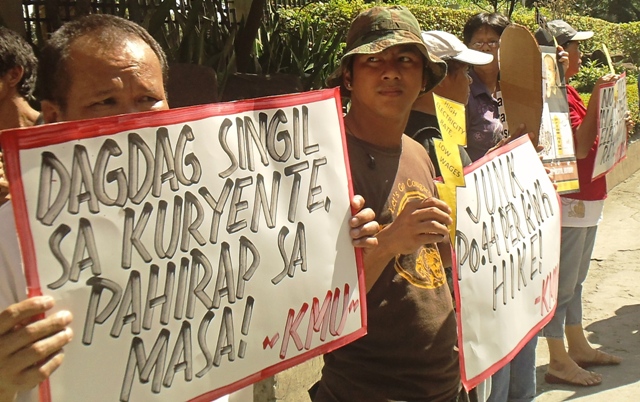 This increase will further lessen the real value of workers’ wages in the country, already one of the lowest in the world, said the KMU in a statement.An August 2011 study released by the UBS (formerly Union Bank of Switzerland) showed that in a survey of 72 cities, the wage level in Manila is second to the lowest, which is Mumbai, India. It also ranked Manila third to the lowest in terms of domestic purchasing power.

But in terms of prices of power rates, the Philippines has already the highest electricity rates charged to residential customers in Asia last year, according to Australia-based International Energy Standards.

Power distribution and generation companies in the Philippines have become some of the biggest and most profitable since its liberalization through the Epira. Power rates have doubled since Epira was implemented, said Roger Soluta.

The KMU condemned the “Aquino government for allowing these huge profit-greedy corporations to further siphon the meager income of workers and people by extending the implementation of Epira.”

Similar to what the Gabriela members said in their protests, the KMU expressed alarm that “Because of the rising prices of basic goods and services brought about by oil price hikes, toll fee hikes and now electricity rate hikes, hunger and poverty will worsen among workers.”

Most protesters urged the public to oppose the price hikes and call for an end to the sway of deregulation and liberalization which made all these ceaseless hikes possible.
“It is clear that the Aquino government will not be asking stakeholders’ for their opinion on the issue – and private corporations managing the country’s expressways could not be happier,” Malunes said as he urged the public to call on their local governments to reject the proposed toll hikes.

The labor group KMU has long been asking for a legislated wage hike, and padlocking the Regional wage boards, which they blame for helping to bring down the country’s wage rates. The transport group Piston, Gabriela and many other progressive peoples’ organization have also been demanding for the repeal of Oil Deregulation Law and Epira, which deregulated the power industry.

Reeling from the left and right price hikes and worsening poverty due to these government policies, Linaban warned that they will continue to protest “as long as our family’s survival is threatened.”