Group formed to ensure Arroyo is brought to court

“The Arroyos will not run out of cards to play as long as they have the numbers in the Supreme Court. So what really matters now, apart from sound legal tactics, is the political decisiveness of the Aquino administration.”

MANILA — In anticipation of maneuvers by the Arroyo’s counsels to ensure that their client escapes accountability,various groups and personalities formed the Gloria Panagutin Movement (Hold Gloria Accountable Movement).

Sr. Mary John Mananzan, Pagbabago! co-chairperson and co-chair of the Association of Major Religious Superiors, veteran actress and writer Bibeth Orteza, whistleblower Rodolfo “Jun” Lozada, Edre Olalia of the National Union of Peoples’ Lawyers (NUPL), Bayan chairwoman Dr. Carol P. Araullo, Mrs. Edith Burgos and Pagbabago! convenor Fr. Joe Dizon came together and resolved to act to thwart the Arroyo camp’s maneuvers and to push the Aquino administration to file more cases against the former president.
The group called on the public to be vigilant on the Arroyo camp’s various maneuvers to escape accountability. The group joined a protest at the Supreme Court during Tuesday’s en banc session.

“The Arroyo camp still has a hefty war chest and a reliable ally in the Supreme Court. We take vigilance as majority of the Supreme Court justices may still act according to political patronage. The Supreme Court could still give Arroyo a ticket out of jail and even out of the country,” said Dizon, Pagbabago! spokesman.

NUPL’s Olalia said while the Aquino administration has legal options in prosecuting the Arroyos, the latter could always go to the Supreme Court where they have the numbers.
“The Arroyos will not run out of cards to play as long as they have the numbers in the Supreme Court. So what really matters now, apart from sound legal tactics, is the political decisiveness of the Aquino administration,” he said. 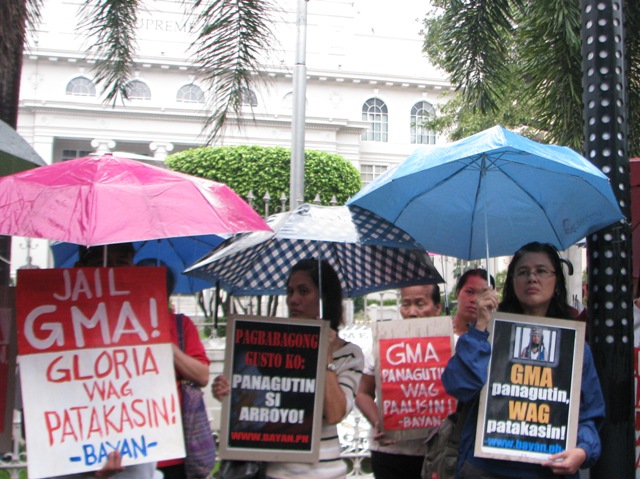 Despite the downpour, activists hold a picket rally in front of the Supreme Court, Nov. 22, demanding the prosecution of former President Gloria Macapagal-Arroyo(Photo by Ronalyn V. Olea / bulatlat.com)

Araullo pointed out that the watch list order was initiated by Arroyo’s Justice Secretary Raul Gonzalez. “They did not question it. They did not consider reviewing it. At that time, they never thought they were violating the right of ordinary citizens to travel. But now that they are at the receiving end of what might be a questionable watch list order, they were too quick to file a petition for TRO (temporary restraining order).”

“Did you not notice how fast Gloria Macapagal-Arroyo got the TRO? Did you not notice that instead of waiting for the DOJ to receive the TRO order, the Supreme court spokesperson made the announcement over the radio and television very early in the morning? The repeatedly announced that the TRO was final and executory and that Arroyo can travel. Is this not enough proof of collusion? Even the conditions they gave, that Arroyo must deposit two million pesos. Two million? That’s only for her snack, right?”

Araullo said the Arroyo camp would always go to the Supreme Court for questions on legality. She said Arroyo’s appointees would always decide on her favor. Twelve of the 15 justices were appointed by Arroyo.

“The only thing that would prevent this is our militance and the public opinion.” Araullo said.

She urged the youth to utilize the social media networks to express their demand for the prosecution of Arroyo. “Tell them you will not allow the Supreme Court to be a legal instrument to provide Arroyo and her cohorts the license to escape,” she said.

The high court deferred its decision on the petitions filed by former First Gentleman Jose Miguel “Mike” Arroyo and former Comelec chair Benjamin Abalos Sr. questioning the constitutionality of the joint panel of the Department of Justice (DOJ) and the Commission on Elections (Comelec). Instead, the high court ordered the DOJ and the Comelec to submit a reply to the petitions within five days upon receiving the order.

The high court also failed to act on a motion questioning the jurisdiction of Pasay City Regional Trial Court branch 112 in issuing an arrest warrant against Arroyo.
The group noted that it took Malacañang too long to file the electoral sabotage case and has not acted on many other cases compromising the certainty of making Arroyo accountable for her crimes against the people.

“The Aquino administration should not give the Arroyos leeway to delay the filing of cases any further. It should be decisive in foiling Arroyo’s maneuvers and make sure that this electoral sabotage case goes through. There should be no compromise,” said Araullo.

Mrs. Burgos, mother of Jonas Burgos who was abducted during the Arroyo administration and has gone missing since, said Arroyo is a also liable for human rights violations.
She said cases have already been filed by various groups and victims of human rights violations but the incumbent regime of Benigno Aquino III has not lifted a finger to act on them.

Meanwhile, Orteza pointed out that Arroyo should be in a government hospital like the Philippine General Hospital. Orteza recounted that the late Crispin Beltran paid for his own hospital bills while in arrest in the Philippine Heart Center, while the pregnant detainees of the Morong 43 were placed in hospital arrest in PGH.

The Gloria Panagutin Movement pushed for the filing of cases such as the NBN-ZTE deal and fertilizer scam plunder cases with the Ombudsman and the civil case filed by members of the Morong 43 (health workers illegally arrested and detained in Morong, Rizal) and the United Church of Christ in the Philippines.

Bayan Muna Rep. Teddy Casino pointed out that during Arroyo’s term and up to the present, hundreds of political prisoners languished in jail and even those with fatal illnesses were not allowed to be treated in a hospital.

“Now why should Gloria be treated differently considering that her crimes against the people are monumental?” said Casiño said.“Arroyo, along with her co-accused, should undergo the same procedure as anyone would, even Erap went through it. She should be finger printed and her mug shot should be taken by the police. If the doctors say that she can be taken to the jail then she should also be taken.”

The activist lawmaker also expressed apprehension that the Supreme Court might throw a monkey wrench in the case and trial against Arroyo. He called for a “full court press” against the former president and urged the Office of the Ombudsman to expedite the filing of the NBN-ZTE plunder case at the Sandiganbayan.

Casiño, along with Bayan’s Araullo and Makabayan vice-president Liza Maza, went to the Office of the Ombudsman last Monday to file a motion to pre-empt a “motion for extension of time to file counter-affidavit.” Arroyo was given untilNov. 21, to file her counter-affidavit after being given a 30-day extension.

“Ombudsman Conchita Carpio-Morales should expedite the case and file it with the Sandiganbayan within the week,” Casino said.

He, Araullo and Maza, also filed an urgent motion asking the Ombudsman to resolve the case in order for the plunder charge to be filed immediately with the Sandiganbayan.
“It would be best for the Ombudsman and the DOJ to file as many cases against GMA at the swiftest possible time and without violating due process. The momentum for accountability has started and it should not stop until justice is fully served. Nothing less than GMA’s imprisonment is needed for justice to be achieved,” Casiño said.

Arroyo is accused of favoring the Chinese telecom company ZTE allegedly because over P1 billion ($23 million) in bribes and kickbacks from the deal were earmarked for her husband, Jose Miguel Arroyo, and former Commission on Elections Chairman Benjamin Abalos, who is included along with Arroyo in a more recent charge—election sabotage.
Arroyo denied the charge, stressing that she cancelled the NBN-ZTE contract when the scandal broke out.

The anti-plunder law defines plunder as the direct or indirect amassing by a public official of at least P50 million ($1.16 million) in ill-gotten wealth through a combination or a series of acts like misappropriating public funds and illegal disposition of government assets. It is a non-bailable offense.

“The Filipino people have waited a long time for these charges to be filed against Arroyo and for justice be laid down against her for her crimes. We already allowed her and her counsels a month’s extension due to her illness, but that should be sufficient time already considering that she is hell bent to get out of the country,” said Casiño.

The activist lawmaker went on to explain that aside from the NBN-ZTE case, they are also hoping that the plunder case we filed against Arroyo and former Philippine Charity Sweepstakes Office General Manager Rose Uriarte will also be expedited at the Ombudsman’s office.

“The wheels of justice must be at its fastest during these times considering that what we are dealing against someone who ruled with cunning and ruthlessness for almost a decade who used anything and everything to remain in power and plunder the people’s coffers,” he said.