MANILA – John Clifford Sibayan, 19, is following the footsteps of his mother who is a teacher in a public school in Pampanga.

“There is nothing like teaching,” Clifford said during an interview. They do not only teach the students their lessons, for a public school teacher like Clifford’s mother, it’s more than giving education.

From his own experience during his practicum at Araullo High School in Manila, Clifford said, being a teacher in a public school is really tiring. But leaving the country for a better pay never crossed his mind. 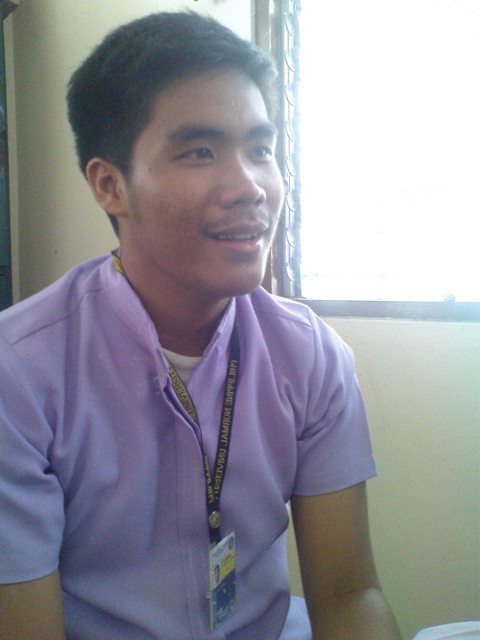 “I dream that one day the system of education in our country will change. And that dream still prevails.” (Photo by Anne Marxze D. Umil / bulatlat.com)

“It’s really a tiring job. My work does not end in school; I still bring my work with me at home,” he said. Preparing for his lesson plan and grades also take his time. He handled five sections with 45 to 50 students. He also dealt with the lack of classrooms, chairs and other facilities. “Because there is no proper ventilation, I bring two handkerchiefs with me because of the scorching heat.”

Clifford is a fourth year student, BSE Major in Filipino at Philippine Normal University in Manila. He may sound dismayed when he told me about his experience but when asked about his plans for the future, Clifford said, he will still continue with what he has started.

Clifford’s stories about his practicum seems endless. He related that a student stole his classmate’s cellphone; about teachers doing all kinds of sidelines just to earn an extra income because of the low salary. His experience is like scenes in a movie that come to a reality and for Clifford, it was heart breaking. “That is why I don’t go to my mother’s workplace because I don’t want to see the poor children.”

It is really more than giving students their education. Teachers also think about the welfare of their students. They do not just teach with the blackboard and stick, they need to be innovative to catch the students’ attention. And like other teachers, Clifford, through his parents, bought an LCD projector to use in his classes. “If you want to give good education you have to invest in things like that or else students will not learn,” he said adding that a class size in public school is bigger than standard class size of 25.

Clifford got students’ attention when he used technology to teach. “If only the government does the same, then for sure our country will not be left behind in terms of ranking in top universities,” said Clifford.

Through his practicum, Clifford had already experienced what licensed teachers are already experiencing. The problems are many aside from the poor ventilation and shortages in facilities. When one of Clifford’s students stole his fellow classmate’s cellphone, Clifford talked to him but the student would not talk. “But one student saw him. He just cried because of guilt. Of course we all know that majority of students in public schools come from the urban poor. Probably he did that because of poverty.”

He then shared his mother’s story about one mother who asked his son to be excused from class because they have to work in the farm to have money. “Of course, my mother had no choice because it was for their food. And when my mother visited her student’s house, it was only made of sack.”

Clifford is only one of the many aspiring teachers committed to educate Filipino children to help improve the country’s impoverished system of education no matter what it takes.

But the government seems to be taking them for granted by giving PNU the biggest slash in budget. From PNUs proposed budget of P754.9 million ($17 million), the Department of Budget and Management (DBM) only approved 37. 7 percent or P284.9 million ($6 million) and zero budget on capital outlay. What is the sense of PNU being the National Center for Teacher Education? By slashing the funds for state universities and colleges, it’s like taking away the opportunity of these future teachers to have quality education. And if these teachers are being deprived of quality education, the government is also depriving Filipino children of quality education.

Education is a right. It was even stated in the United Nations Universal Declaration of Human Rights to which the Philippines is a signatory. Article 26 stipulates: Everyone has the right to education.

Despite his experience, Clifford was not demoralized to teach. Unlike other young students who aim to have a high paying job, Clifford just wants to give Filipino students a good education.

“If only I am not studying at the Philippine Normal University, I will not pursue teaching. But I dream that one day the system of education in our country will change. And that dream still prevails.”