MANILA – Drivers allied with the Pinagkaisang Samahan ng mga Tsuper at Opereytor Nationwide (Piston) and members of the progressive group Bayan (Bagong Alyansang Makabayan) held protest actions on Wednesday and Thursday, respectively, against the “greed” of oil companies and the Aquino government’s “inutility” in the face of it. They urged the public to support calls for “real solutions” to oil overpricing. 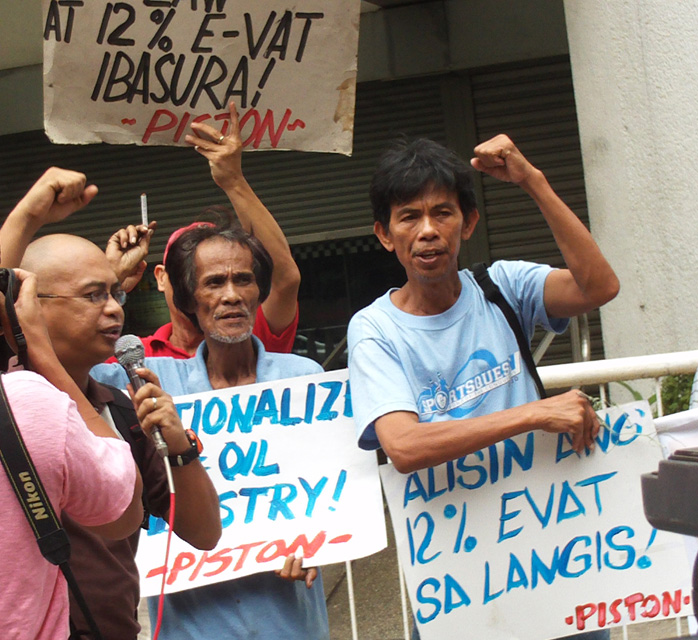 Last week, drivers and small operators, women and workers’ groups have also rallied against the non-stop oil price hikes. All of the protesting groups warned that poverty and hunger would likely worsen if the trend in price hikes such as of oil products continue unchecked.

Bayan members shouted their calls for scrapping the oil deregulation law at the headquarters of multinational oil company Shell in Makati City. They wore yellow shirts and bore placards of the Shell trademark on which were written their sentiments, for example their complaints that while oil companies are pocketing profits of at least P42-million ($976 thousand) a day, the Aquino government is acting “inutile” in the face of their ceaseless oil price hikes.

Pilipinas Shell is the local subsidiary of global giant Royal Dutch Shell. Of the oil companies operating in the Philippines, Pilipinas Shell declared the biggest profits from 2001 to 2009, totaling over the nine-year period to P73 billion ($1.62 billion). The still incomplete data for Petron showed that it earned more than P30 billion ($693.26 million) in profits over the same period, while Chevron (formerly Caltex) raked in P40.2 billion ($929 million) in profits from 2001 to 2009. 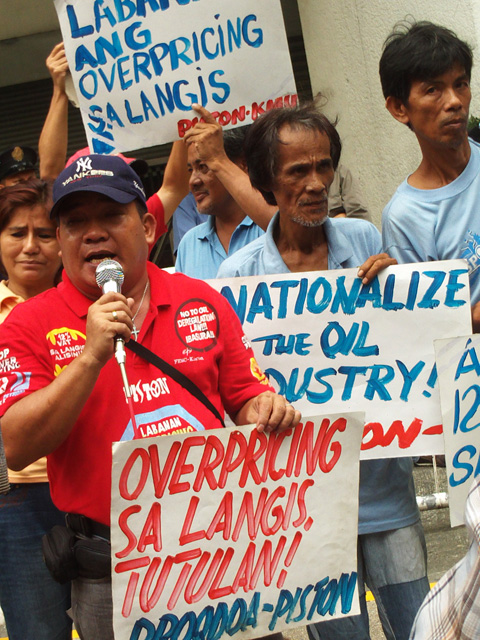 And these profits are reportedly just a fraction of their actual super-profits. Ibon, a non-government economic think tank, said early this year that the deregulation and its principle of automatic price adjustments have allowed the Big Three oil companies “to amass huge profits while further strengthening the industry cartel.”

Oil companies have been accused of practicing transfer pricing – where the mother company jacks up its selling price to its local subsidiary to siphon the profits of the latter – and using the fluctuations in the world market for oil to jack up their prices more than the amounts warranted. It does not help the Filipino consumers that until now, the call for “real transparency” in the domestic oil industry is not yet acted upon by the Philippine government.

During their protest rally, San Mateo reiterated Piston’s condemnation of the “continued failure of Malacañang and the Department of Energy to call for a meeting of the Multi-Sectoral Stakeholders that should have been investigating oil overpricing and reviewing the Oil Deregulation Law, as President Benigno “Noynoy” Aquino III had promised in a dialogue with transport sector last September 14.” 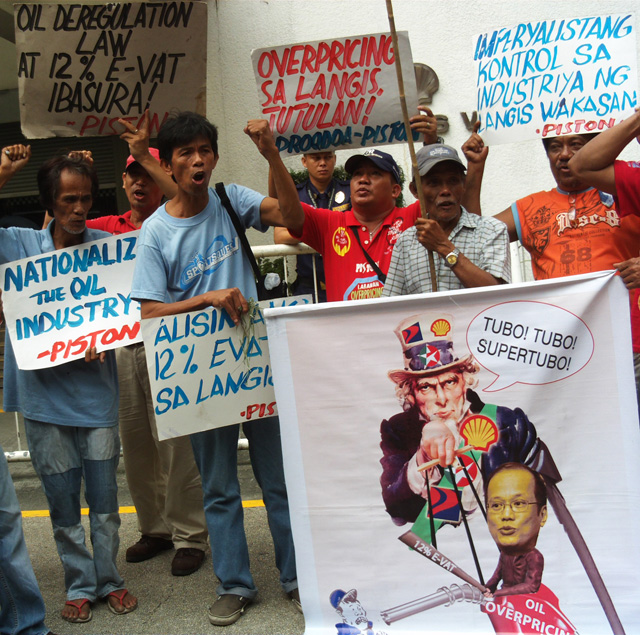 If the VAT on oil would be suspended or scrapped altogether, it would bring down the price of diesel by P6.10 ($0.14) per liter and gasoline by P7 ($0.16). The reduction, said San Mateo, would provide an additional relief of P180 ( $4.186) more in take-home pay per jeepney or AUV express driver. As such, San Mateo argued that if the Aquino government scraps the VAT on oil products, “everyone would benefit, from the drivers to motorists to consumers, riding public and the entire economy.”

The continued hike in price of diesel is seen also as harmful to consumers because farm to market transport of food stuff such as rice, meat, fish, vegetables and fruits is largely fuelled by diesel.

San Mateo emphasized that the oil cartel in the Philippines is “deliberately and continuously jacking up the prices of diesel to further maximize their gargantuan superprofit-taking because their daily total sales are 60-percent to 70-percent composed of diesel.

The overpricing of oil products has been blamed also as one of the biggest causes of losses and shut down of small Filipino businesses, San Mateo said. This, he added, results in layoffs and intensified poverty of more Filipino workers. He warned that if oil prices especially of diesel continue to increase, they will continue launching various protest actions.