Morong 43 pushes court to act on their case against Arroyo

MANILA – Health workers who sued former president Gloria Macapagal-Arroyo for human rights violations are dismayed at what they described as the slow pace of the local court handling the case.

Six of the Morong 43, or the 43 health workers arrested on February 6, 2010 and detained for ten months for trumped up charges, trooped to the Quezon City Hall of Justice this morning calling on the Regional Trial Court Branch 226 to act on the first case filed against Mrs. Arroyo and her key military officials.

Filed in April this year, the P15-million ($348 thousand) damage suit seeks five causes of action against the former president and her officials involved in the case. These include damages for torture, damages for the violation of their constitutional and statutory rights, including their right against arbitrary and illegal detention, right against self-incrimination and right to counsel, divestment of personal belongings, Arroyo’s neglect of duty, and moral damages.

Through their counsels from the National Union of Peoples’ Lawyers (NUPL), the complainants filed a second motion to resolve their petition for the writ of preliminary attachment, a supplemental motion to the civil case. A writ of preliminary attachment can be issued against the property of a defendant to serve as security for the satisfaction of any judgment that may be recovered; and that after due hearing on the principal cause of this action, judgment will be rendered against the defendant.

The local court has not yet issued summons to Arroyo and other defendants. NUPL lawyers said the court asked them additional copies of the complaint before the court could issue summons. The lawyers provided additional copies on the same day. Cortez said the summons should be served immediately.

Dr. Merry Mia-Clamor and Gary Liberal, two of the Morong 43, demand the prosecution of Gloria Macapagal-Arroyo in a rally outside the Quezon City Hall of Justice, Nov. 28. (Photo by Ronalyn V. Olea / bulatlat.com)

“Is this because of the court’s inefficiency or is this a deliberate effort to delay the case? I’m no longer surprised why cases have been dragging on for years,” Dr. Merry Mia Clamor, one of the Morong 43, said in an interview with Bulatlat.com.

The resolution was issued before Mrs. Arroyo’s recent attempts to leave the country.

In their second motion, the lawyers of the Morong 43 argued that the recent events bolstered their clients’s claim as shown by the attempt of Mrs. Arroyo to fly out of the country, under the guise that she will seek medical treatment abroad for what is now admitted as a non-life-threatening ailment.

“Arroyo’s attempts to leave the country only show her deliberate intent to evade justice,” Roneo Clamor, secretary general of Karapatan and husband of Dr. Mia-Clamor, said. “She wants to evade the charges filed against her, including the damage suit filed by the Morong 43.”

Cortez said they will coordinate with the sheriff for the immediate serving of the summons that would require Mrs. Arroyo to file an answer.

Meanwhile, members of the Morong 43 said Mrs. Arroyo should not be given special treatment. Mrs. Arroyo is now in the custody of the authorities after charges of electoral sabotage have been filed against her.

“We have suffered so much. We only want justice,” Mercy Castro, one of the Morong 43, said. She was one of the two women who gave birth while in detention.

Gary Liberal, a registered nurse and spokesman of the Morong 43, said that while they had to go on a hunger strike, get punished in jail for holding a noise barrage, and file numerous requests in court to assert hospital confinement for two of their then pregnant colleagues Judilyn Oliveros and Mercy Castro at the Philippine General Hospital, Arroyo was graciously allowed by the court and authorities to be on “hospital arrest” without dropping a sweat. 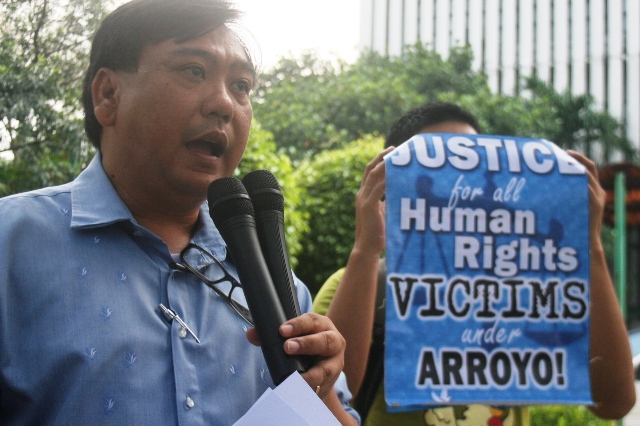 Ephraim Cortez, one of the lawyers of the Morong 43, says they will ensure that Gloria Macapagal-Arroyo be held liable for human rights violations.(Photo by Ronalyn V. Olea / bulatlat.com)

End Impunity Alliance convenor Cristina Palabay said Mrs. Arroyo must be held accountable for the human rights violations she has wrought under her administration.

Karapatan recorded 1,190 victims of extrajudicial killings under the Arroyo administration, from January 2001 to March 2010. There had been 205 victims of enforced disappearances, 1,028 victims of torture, and hundreds of thousands were forcibly displaced in rural areas as a result of military operations.

Three damage suits have so far been filed against Arroyo in connection with human rights violations. In June, the United Church of Christ of the Philippines (UCCP) filed a suit and recently, relatives of the victims of the Ampatuan massacre have also sued Arroyo.

Edre Olalia, NUPL secretary general, said Arroyo can never run or hide. “Wherever she goes, justice will haunt her.”