Small Filipino businessmen reportedly concede that it is not wage which is eating up a huge chunk of their profits, but energy costs.

MANILA – Labor and business found an issue to agree on when they discussed last Monday the high electricity rates in the country and how it burdens both sectors. In a forum held at the University of the Philippines–Diliman, leaders from labor and business groups called on the government of President Benigno “Noynoy” Aquino III to immediately take action to reduce electricity rates in the country.

Participants to the forum dubbed as “Highest Power Rates in Asia: A Labor-Business Consultation on Electricity,” urged Aquino to reject petitions for rate hikes, stop hearings for such petitions, terminate onerous contracts with independent power producers, and investigate the PSALM Corporation and Napocor to determine the government’s true financial obligations. 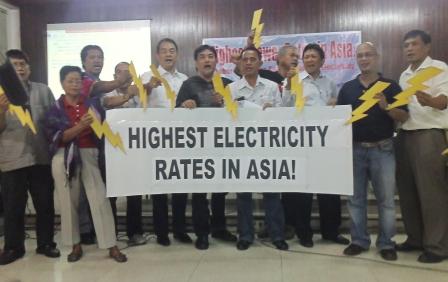 Members of labor center Kilusang Mayo Uno (KMU) and its federations, the Independent Philippine Petroleum Companies Association (IPPCA), Filipino-Chinese Chamber of Commerce and Industry (FFCCII) and the Philippine Chamber of Commerce and Industry (PCCI), stood united and with blown-up images of electric currents they took swipes at the “Highest Electricity Rates in Asia.”

“High electricity rates are a huge burden to Filipino workers already suffering from meager wages and the increasing prices of basic goods and services,” said Roger Soluta, KMU secretary general. The labor center has twice rallied in front of the head office of Manila Electric Company (Meralco) last month to protest the latest price hikes it had imposed.

Price hikes in utilities reportedly dig deep into the pockets of the Filipino working class, considering that their wages have not improved much over the past decade. In fact, in a research with the title “Prices and Earnings” released last August 2011 by UBS (formerly Union Bank of Switzerland), where they compared price levels, wage levels and purchasing power in 72 cities, they found out that Manila ranks second lowest in price levels, second lowest in wage levels, and third lowest in purchasing power.

“These are some of the reasons why we are calling for a significant wage hike. These are affecting us directly and also indirectly – in that these cause an increase in the prices of basic goods and services that we consume,” Soluta said. 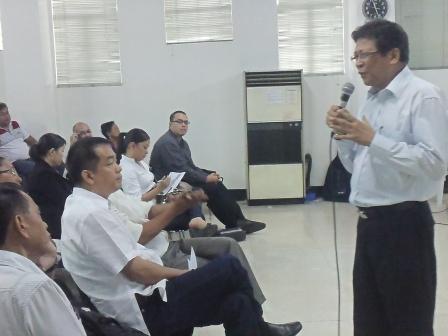 Fernando Martinez of Eastern Petroleum discusses points why electricity rates in the country are some of the highest in the world.(Photo by Pia Arellano / bulatlat.com)

Fernando Martinez, CEO of Eastern Petroleum and President of Independent Philippine Petroleum Companies Association (IPPCA), agreed and added that “High electricity rates are also eating up a huge section of production costs for businessmen, especially those in the small- and medium-scale categories.”

Though labor and businesses particularly those with the foreign chambers of commerce and the Employers Confederation of the Philippines are frequently at loggerheads over the issue of legislated, nationwide, across-the-board wage hike, the said wage hike, when granted, had been shown to cause only less than a fifth (17.3-percent) drop in profits for companies with more than 20 employees, based on an Ibon study last April. The non-government think-tank based its research on the 2008 Annual Survey of Philippine Business and Industry of the National Statistics Office.

Small Filipino businessmen reportedly concede that it is not wage which is eating up a huge chunk of their profits, but energy costs. This is reportedly verified by a study of the Australia-based think-tank International Energy Consultants that showed the electricity rates collected from households in the Philippines last year are the highest in Asia. Labor costs, said the small Filipino businessmen, do not exceed 10-percent of their overall production costs.

Big businesses, though not present at the said forum, have also reportedly complained in other venues about the high costs of energy in the Philippines. 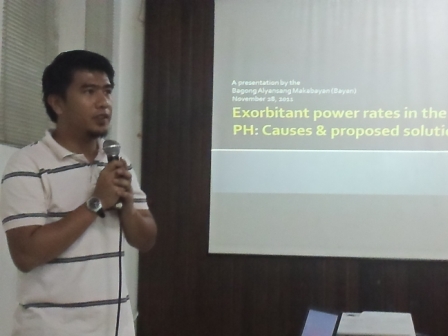 All these costs have been legally computed into the public’s electricity bill through “unbundling” and other forms of deregulations brought about by the EPIRA (Electric Power Industry Act), a law enacted under former President Gloria Macapagal-Arroyo 10 years ago.