CALBAYOG CITY, Western Samar – On Nov. 17, farmer Romeo Galvez went to the municipal hall of Calbiga, Samar to process some papers. He was surprised when the police arrested him on charges of murder, frustrated murder and illegal possession of firearms.

Later would Romeo, village chieftain of Buluan, Calbiga, know that the complaint against him was the same charge filed against his brother, Noel, who has been detained at the Catbalogan City Jail for more than a year. The complaint, filed by 1st Lt. Renante Morales of the 34th Infantry Battalion of the Philippine Army, is in connection with the New People’s Army raid against soldiers on Dec. 10, 2009 at Bgy. Binanggaran, Calbiga.

Alberto Bersola, coordinator of Kapunungan han Gudti nga Parag-uma ha Weste han Samar (Kapawa), a local peasant group, said another village chieftain, Ildelfonso Nablo of Barangay Binaggaran and more than 60 other peasants, mostly members of Kapawa, have been included in the charge sheet as John Does and Jane Does.

Bersola decried the military’s practice of filing charges against farmers. “They are ordinary farmers, not NPA members,” Bersola said in an interview. “The military turns their anger on defenseless farmers.”

According to Kapawa, Romeo and Nablo are innocent. At the time of the incident, both were in Catbalogan,Samar to claim checks from the Pantawid sa Pamilyang Pilipino Program. 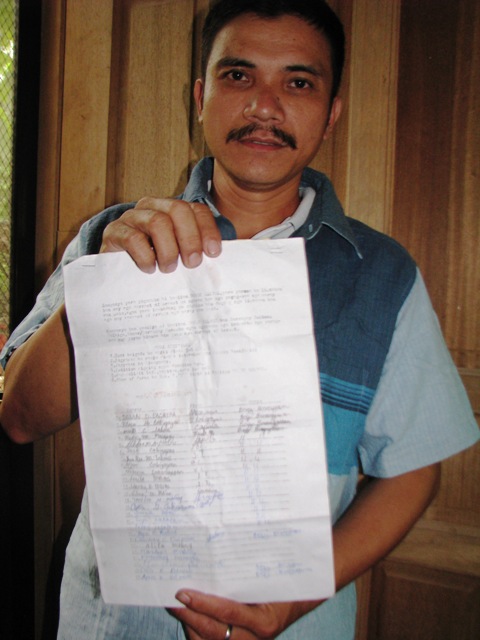 Bersola showed two petition letters signed by local residents calling on the authorities to drop the charges against the two. The village chieftain of Barangay Beri, Lito Cabalhao, also testified in court that the two accused are innocent, saying that both are active in the Association of Barangay Chairmen (ABC).

Galvez’s lawyer filed a motion to quash the warrant of arrest because the name indicated in the warrant is Romy Galvez, not Romeo Galvez.

Earlier, on Sept. 12, one farmer was shot dead and three others were arrested in retaliation over a raid at the municipal hall of Hinabangan, Samar by NPA guerrillas.

Based on Kapawa’s account, Mariano Abarracoso went to the site of the incident after the raid. He was shot by a policeman. When three of his relatives went to file a complaint, they were arrested. Adalberto Abarracoso, Mariano’s son, Roque Abadiano, son-in-law and Jornalia Acutim, daughter are now detained at the Hinabangan Jail.

According to Kenneth Perez, deputy secretary general of Katungod-Sinirangang Bisaya,the local human rights group, there are 22 political prisoners all over the region. Seven were arrested under the Aquino administration, including artist Ericson Acosta and three peasants in Leyte.

There are 360 prisoners all over the country, according to Samahan ng Ex-Detainees Laban sa Detensyon at Aresto (Selda).

Perez noted that all of the political prisoners in the region are charged with common crimes, in violation of the Hernandez doctrine, which stipulates that crimes committed in furtherance of rebellion should be subsumed in the latter.

In its submission to the United Nations Human Rights Council for the Universal Periodic Review of the Philippine government, the National Union of Peoples’ Lawyers (NUPL) also slammed the criminalization of political offenses.

“This phenomenon continues despite the fact that even the testimonial and documentary bases – spurious or otherwise – submitted to the prosecutors show that the alleged acts are obviously in furtherance of one’s political beliefs…This wrong practice also persecutes political offenders or those alleged to have committed acts in pursuit of one’s political beliefs, makes a travesty of the rules of evidence, diminishes the political nature of the acts and reduces the respondents to common criminals,” the NUPL said.

The human rights lawyers’ group criticized the use of generic “John/Jane Doe” warrants against activist leaders by many prosecutors who file charges against persons who, apart from being merely identified as “John Does,” are not otherwise particularly described to distinguish them or set them apart from other persons. The practice, said NUPL, has resulted in instances where the names of persons who are subsequently arrested are substituted in place of “John Does” in indictments even though the evidence extant in the records does not show any substantial identity between the former and the latter.

Ma. Josephine Dy of Karapatan-Western Samar said the inclusion of the more than 60 Calbiga farmers in one charge sheet reminded her of the case filed by the military years ago in connection with the alleged Leyte mass graves. “Many have been arrested based on the spurious charges, including farmers,” Dy said.

“Warrants of arrests are issued on the basis of affidavits of supposed witnesses without particular descriptions of “John Doe” against those who are invariably leaders/members of legal mass organizations, NGO workers, party list groups and even human rights advocates. In many cases, spurious or coached affidavits, if any, have been manufactured to justify the improper amendment of existing indictments to implead mass activists,” the group said.

“Stop the filing of fabricated criminal charges against activists and farmers. They should be released immediately without preconditions,” Perez said.