“There was one domestic helper who suffered a nervous breakdown. We brought her to the psychiatric ward of the hospital. Another was a victim of rape. We filed a case against the Chinese lawyer who was eventually detained, with the support of various churches,” Bishop Toquero said. “There were many detained migrant workers, not only Filipinos but also Indonesians. We campaigned for their release– Iraqis, Africans and citizens of other nations–who were imprisoned without reason.”

Along with his late wife Alegria, Bishop Toquero administered the Methodist Shelter for terminated and distressed domestic workers. From 1996 to 2001, he was also active in the prison ministry for migrant workers.

The good bishop is one of the recipients of the first ever Gawad Migrante, an award given by the Migrante International, a global organization of OFWs, to those who devoted their lives in championing the rights of Filipino migrants, especially the neglected and the abused.

Bishop Toquero, now co-chairman of the Ecumenical Bishops’ Forum and vice chairman of the National Council of Churches in the Philippines (NCCP), humbly received the award, saying: “I am surprised. I don’t think I already deserve this.”

When he was assigned as a resident bishop of the UMC- Manila Episcopal Area in 2001, Bishop Toquero initiated the ministry program for migrants. Even as he retired as a bishop in 2009, he has continued to support the activities of OFWs.

In her opening speech, Connie Bragas-Regalado, chairwoman of Migrante Sectoral Party, said they looked back at history and searched for the most deserving individuals and organizations. The awarding ceremony on Dec. 13 was part of the Migrante International’s 15th anniversary celebration.

The Migrante International found it appropriate to give posthumous awards to the pioneers of the Filipino migrant workers movement as early as the 1930s.

First to be recognized was Carlos Bulosan, author of the book America is in the Heart.

Born to a peasant family in Binalonan, Pangasinan, Bulosan grew up in poverty. To augment the family’s income, he decided to work in the United States. He arrived in Seattle in July 1930 at the age of 17, without money and at that time, could not speak English. 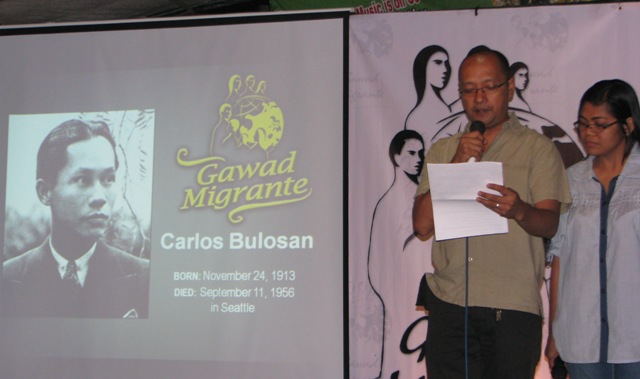 Bulosan worked on the farm, in hotels and factories and experienced discrimination and difficulties. He joined unions, eventually becoming a union leader. When he got sick, he wrote his famous book, exposing the hardships and struggles of Filipinos and other migrant workers in the US. He died of bronchopneumonia on Sept. 11, 1956.

One of his descendants, Elizabeth Domaoal-Basanes, received the award.

Itliong and Vera Cruz mobilized thousands of Filipino farm workers in Delano, California, then the lowest-paid workers. Eventually, Mexican-Americans joined, resulting in the formation of the United Farm Workers of America in August 1966. The strike lasted until 1970 and paved the way for a collective bargaining agreement with the table-grape growers, representing more than 10,000 farm workers.

Itliong served as assistant director of Agricultural Workers Organizing Committee, precursor of the UFW. Later, he became its national boycott coordinator. After the strike, Itliong served as president of the Filipino American Political Alliance, the first national political organization of Filipino-Americans in the US.

Itliong died in 1977 at the age of 63. In Carlson, California, Larry Itliong Day is celebrated every 25th of October, his birthday.

Tony Doroni of the National Alliance for Filipino Concerns (Nafcon-USA) accepted the award. Doroni met Vera Cruz in the 1990s in California. “As an organizer, I look up to Vera Cruz as my model,” he said.

Another union leader, Pedro Calosa, was also given the posthumous award. He led strikes of Filipinos in the plantations in Hawaii in 1924. After the strike, he was deported back to the Philippines. By 1929, he started organizing the Ilocano Colorum of peasants. He led the Tayug Uprising on January 11, 1931 against feudal exploitation. He was killed by state forces in 1967.

In a video, Ruby Calosa Torio-Marquez, granddaughter of Calosa, thanked Migrante International for giving recognition to Calosa’s service to the Filipino people.

In 1984, eleven migrant organizations in Hong Kong stood up against former President Ferdinand Marcos’s Executive Order 857 mandating all OFWs to remit through the Philippine banking system 50 to 70 percent of their basic salary. They formed United Filipinos Against Forced Remittance (Unfare), a tactical alliance against Marcos’s directive. The alliance led internationally-coordinated actions that compelled Marcos to revoke EO 857. 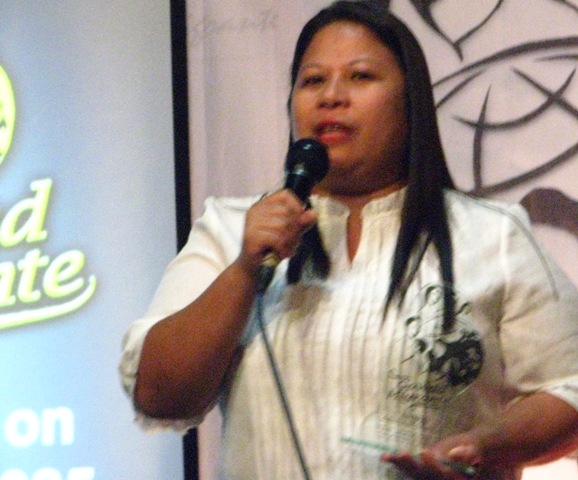 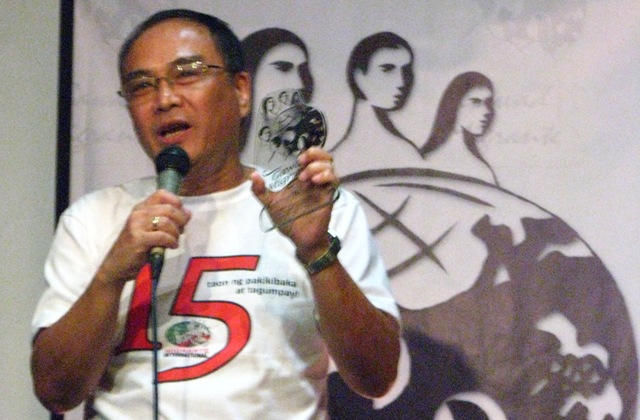 Dolores Balladeres (top), chairwoman of the United Filipinos in Hong Kong and Jun Delles (bottom) of the Mission for Migrant Workers vow to continue their service to the overseas Filipino workers.(Photo by Ronalyn V. Olea / bulatlat.com)

On Mayo 12, 1985, the United Filipinos in Hong Kong (Unifil- HK), one of the prime movers behind the alliance, was formally launched with a more strategic perspective of mobilizing migrant workers for their rights and welfare.

In her acceptance speech, Dolores Balladeres, Unifil-HK chairwoman, said their group will continue to consolidate its ranks to defend the rights of OFWs.

Another recipient of the Gawad Migrante is the Mission for Migrant Workers (MFMW), also in Hong Kong. Founded in March 1981 by Protestant and Catholic churches, the ecumenical institution provides services to distressed OFWs.

Jun Delles of the MFMW, who received the award, said the institution would always serve the mass movement of Filipino migrant workers.

Meanwhile, in the Middle East, in 1985, the Kapatiran sa Gitnang Silangan (KGS) began as a small group promoting camaraderie among OFWs. Later, the KGS transformed into being a political organization advocating for the rights of OFWs in Riyadh and nearby cities.

As he received the award, John Leonard Monterona of the Migrante-Middle East said in Filipino: “Amid the difficult situation of migrants in the Middle East, our organizing efforts will go on.”

The Migrante International gave posthumous award to Juana Tejada whose death paved the way for the significant improvements of caregiver program in Canada.

Tejada arrived in Canada in March 2003. In 2006, she was found eligible for permanent residence. The following year, she was diagnosed with colon cancer stage 4 and was declared medically inadmissible for the residence. Tejada, with the support of migrant groups in Canada, fought for her rights until her very last breath. On July 17, 2008, the Citizenship and Immigration Canada granted Tejada’s dying wish, that she be granted permanent residence on humanitarian and compassionate grounds.

In a video message, Tejada’s lawyer, Rafael Fabregas, said of his client: “She did not want any other person to undergo what she went through.”

Zumel, a journalist who fought the Marcos dictatorship, founded the International Office of the National Democratic Front of the Philippines (NDFP) in the Utrecht, the Netherlands.

Sison, a political refugee since 1987 in Utrecht, the Netherlands, has not only been denied political asylum but was imprisoned in a foreign land and labeled as a terrorist.

In a video message, Sison challenged Migrante International to win greater victories in promoting the rights and welfare of migrant workers. He urged the group to continue fighting for a new Philippines, where Filipinos would not be forced to work abroad and would have a decent life in the Philippines.