MANILA — Urging measures to push back the worsening hunger and poverty among Filipinos, workers led by labor center Kilusang Mayo Uno (KMU) celebrated the 79th birthday last Jan 7 of renowned labor leader Crispin “Ka Bel” Beltran. They remembered him by issuing calls that would help resolve poverty, the same problem which Ka Bel had resolutely led workers to resolve when he’s alive. Workers and politicians looking up to Ka Bel held a program in front of a marker dedicated for him at Plaza Miranda, Manila, in front of the famed Quiapo Church. 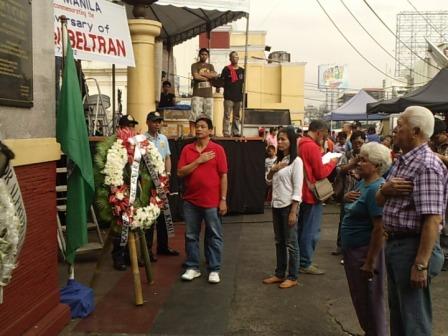 Beltran’s widow Rosario “Ka Osang” and one of her daughters, Ofelia Balleta who heads the Crispin B. Beltran Resource Center, graced the program with Manila Mayor Alfredo Lim. The latter has declared Jan. 7 as Manila’s “Ka Bel Day.”

Crispin “Ka Bel” Beltran was a congressman, an Anakpawis Partylist representative, at the time of his death. He died after falling from the roof of his house which he was trying to fix.

“We have no doubt that if Ka Bel been were alive today, he would have been with us struggling for a significant wage hike and an end to contractual employment. He would have been opposing the government’s attempts to rob the workers and the people of our hard-earned income,” Labog added. 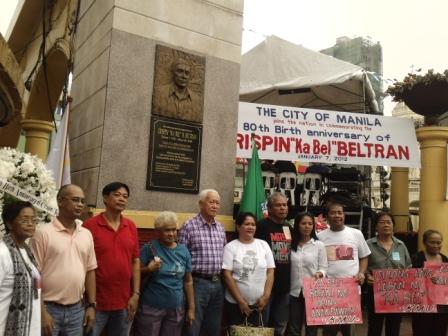 The KMU revealed that Ka Bel had been consistently critical of President Benigno “Noynoy” Aquino III. The labor center recalled that when Ka Bel and Aquino were both still members of the House of Representatives, they had a heated debate right after the massacre of striking farmworkers in Hacienda Luisita on Nov. 16, 2004.

“Ka Bel would not pin any hope on Noynoy. He knew just how anti-worker, anti-farmer and anti-people Noynoy Aquino is right from when they were still both members of the House of Representatives,” Labog declared.

He added that “Ka Bel would not find it surprising that Noynoy as president is implementing anti-worker and anti-people policies. “He would know that despite Noynoy’s blahs about ‘change’ and ‘hope,’ Noynoy belongs to the same comprador and landlord classes who’ve been responsible for hunger and poverty in the Philippines,” Labog said.

Text and photos by Sheilette Untalan