Demolition in San Juan, among the most violent

Reporters from alternative media group Tudla Productions also have their own share of harassments during their coverage of the demolition. While taking photos, police tried to confiscate the camera of Chantal Eco. On a separate incident, their volunteer reporter Shaine David was also arrested.

In an interview at the police precinct, David said, the police tried to confiscate her camera. She, naturally, resisted and the police mauled her, pulled her to the police car and brought her to the station. Her colleague from Tudla and other alternative media organizations such as Bulatlat.com, Pinoy Weekly and Sipat negotiated for her release.

During the negotiation, the police said David was not “illegally detained” because she was not literally “behind bars.” But, she could not leave the police premises yet. David was finally released after an hour of negotiations with the police. Members of alternative media who vouched for David as a news media practitioner were asked for their names and signatures.

According to the National Union of Journalists in the Philippines, this is not the first time that a member of the alternative press was harassed by the San Juan Police. On January 25, 2011, when Corazon de Jesus first barricaded their community from demolition, Godson Escopete of Tudla was arrested along with a broadcaster for a community radio station Radyo Pinaglabanan.

Meanwhile, initial reports by the Health Alliance for Democracy said there were 26 were injured, two of them were brought to the hospital. Later in the evening, Bagong Alyansang Makabayan, the umbrella group of progressive organizations, said there were 31 residents and supporters who were injured in the demolition.

“We call on Malacañang to explain why there was yet another violent demolition of urban poor communities that has been a trend under his administration. Aquino and the Ejercitos should be made accountable for the gross human right violation,” Alyansa Kontra Demolisyon said.

Youth group Anakbayan also condemned the violent demolition, holding both the city government and the administration of President Benigno S. Aquino III as responsible for the attack on the people’s rights. “The overly violent attack done by the government and the police is a gross violation of the peoples fundamental right to decent homes and livelihood,” Anakabayan national chairperson Vencer Crisostomo said.

Crisostomo, in a statement, described the demolition as “heartlessness against the poor, disgusting corruption and state fascism.” He added that the the “government is so heartless and anti-poor, it is willing to demolish homes without consideration of their welfare.”

“What kind of government do we have when they would displace these families from their homes when there is already so much suffering from poverty?” Crisostomo said.

Gabriela Women’s Party Representative Luz Ilagan said the violent demolition also illustrates how the San Juan local government and the Aquino administration treat informal settlers like rats. “This portrays its inhumanity and the lack of sincerity in pursuing a comprehensive program that will provide decent housing and social services to the poor,” Ilagan said.

Ilagan said the calls of the residents for an in-city relocation in instead of moving to Rodriguez was ignored.

“Residents are being forced to relocate where jobs, electricity and water are scarce. Demolitions and forced evictions automatically translate to workers having to leave their sources of income and children would have to stop from going to school,” Ilagan said. She added that the violent demolition of homes and forced eviction of urban poor residents amid worsening poverty, unemployment and the depravation of basic social services is the height of social injustice.

Crisostomo, for his part, said the government has no clear plan to provide housing for the poor. “They want to relocate urban poor to far-flung villages and danger zones. The people had no other option but to fight back and defend their homes. They were met with snipers, tear gasses and state violence,” he said.

Blaming progressive groups for the violence 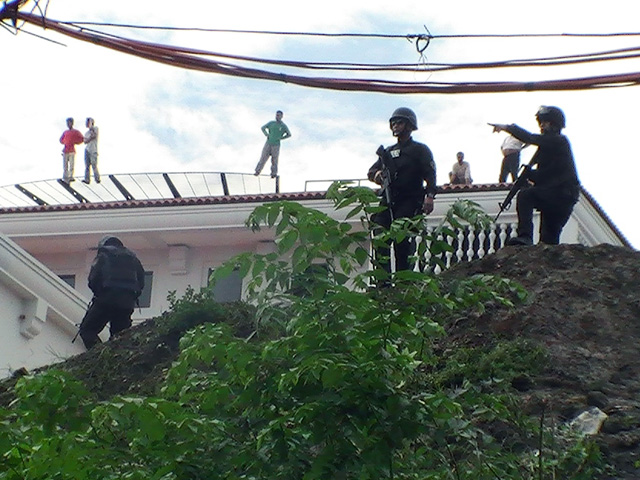 The local government, same as last year, blamed the activists who went to the community of Corazon de Jesus, for instigating the violence that erupted during the demolition. In an interview with ANC, a Filipino cable news channel, San Juan Rep. Joseph Victor “JV” Ejercito said it was the “professional” activists who are non-residents that triggered the tension.

“Those who triggered the violence do not even live here. They are student activists from different schools like the Polytechnic University of the Philippines. I received news that there were also people from Hacienda Luista and North Triangle who were here,” Ejercito told ANC, “They are the professional activists who goes to places where there are demolitions.”

He added that San Juan Mayor Guia Gomez, his mother, ordered the demolition despite possible resistance from the residents for as long as the police would observe maximum tolerance.

In his Facebook fan page, Ejercito said, the local government is also fighting for the “sacredness” of the Pinaglabanan Shrine, where Filipinos fought against the spanish colonizers. He added it is the shrine “where the heroism and patriotism of the Filipino Heroes was first displayed.”

“We are determined to enshrine this heroism of the Katipuneros to be a source of pride and honor for all Filipinos,” Ejercito said, “This issue is not simply city hall vs. urban poor, it is the preservation of the heroism of the Filipino.”

“It seems the Ejercitos want to have much fun in San Juan,” Crisostomo said, citing the much talked about new slogan of the Department of Tourism’s It’s more fun in the Philippines, “It is ironic that while we want foreigners and tourists to have fun in our country, we are treating our fellow Filipinos with brutality.”