“We welcome the filing of impeachment complaint against Corona who remains to be a loyal cohort of former president Gloria Macapagal-Arroyo… However, we are alarmed by President Aquino’s move to appoint a new Chief Justice which is obviously meant to control the SC.” – Rodel Mesa, secretary general of Unyon ng mga Manggagawa sa Agrikultura (Uma)

In a press conference this morning, Rodel Mesa, secretary general of Unyon ng mga Manggagawa sa Agrikultura (Uma) said that while they support the impeachment of Chief Justice Renato Corona, they would not allow Aquino to control the Supreme Court and get a favorable ruling on the disputed land owned by Aquino and family.

On November 22 last year, the highest court in the land, in a unanimous decision, ordered the distribution of 4,916 hectares of Hacienda Luisita land to the original 4,296 original farmworker beneficiaries (FWBs).

“We welcome the filing of impeachment complaint against Corona who remains to be a loyal cohort of former president Gloria Macapagal-Arroyo as manifested by his actions to block all moves to make Arroyo accountable for a long list of crimes she committed against the Filipino people. However, we are alarmed by President Aquino’s move to appoint a new Chief Justice which is obviously meant to control the SC,” Mesa said.

Corona was impeached by the House of Representatives in December after 188 representatives signed the complaint. President Benigno Aquino III was widely believed to be behind the impeachment of Corona.

Speaking to reporters, Jan. 13, Corona said of his impeachment: “It’s very clear that it’s the Hacienda Luisita [decision] that they want reversed. It’s very clear, nothing else.”

A day after the issuance of the high court’s resolution, Aquino said there should be “just” compensation for the land owners.

On December 15, the Hacienda Luisita management filed a motion for clarification and reconsideration asking the SC to increase the “just compensation” for the land based on the 2006 valuation, amounting to P1 million ($23.2 thousand) per hectare, retain the stock distribution option scheme and remove the ten-year moratorium on selling the land.

The farm workers said the motion is meant to derail the implementation of the SC decision, particularly the distribution of land. 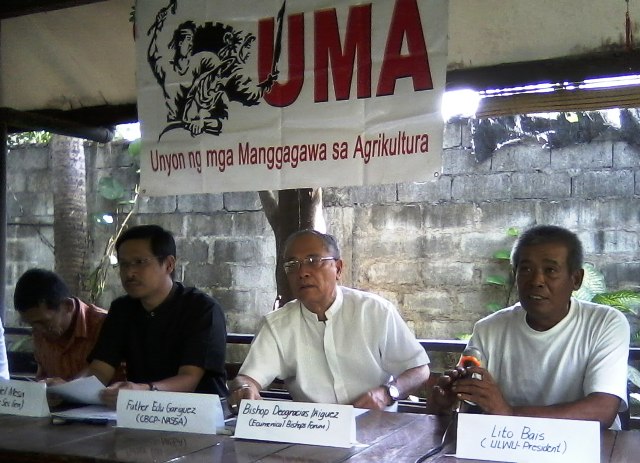 Lito Bais, United Luisita Workers Union (Ulwu) acting president, called on the high court to immediately junk the motion filed by the Cojuangcos. “We expect that the high court would find nothing new in the arguments of the Cojuangcos and to keep the essence of their November 22 decision to distribute the land,” he said.

Expressing support for the farm workers, Caloocan Bishop Deogracias Iñiguez, co-chair of the Ecumenical Bishops Forum, said: “Any further delay in the execution of the Supreme Court’s decision adds on to the long list of injustices committed against Luisita farmers.”

The farm workers have been asserting their historical claim to the thousands of hectares of land for more than half a century.

The Cojuangcos acquired the 6,443- ha plantation in 1957 from its original Spanish owners, the Tabacalera. The land was supposed to be awarded to its tillers 10 years later as stipulated in the Cojuangcos’ loan agreement with the Government Service Insurance System (GSIS).

After taking over as president, a Cojuangco heir, Corazon Cojuangco-Aquino, implemented the Comprehensive Agrarian Reform Program (CARP) as her administration’s centerpiece program. Cojuangco-Aquino placed Hacienda Luisita under the stock distribution option (SDO), a scheme that distributed corporate stocks rather than land to the farm beneficiaries.

In November 2004, the farm workers staged a strike in protest of the SDO, the retrenchment of workers and their low salaries. On November 16, 2004, police and soldiers opened fire at the picketing workers, resulting in the death of seven farm workers.

In 2005, the Presidential Agrarian Reform Council issued a resolution revoking the SDO and placing the hacienda under the compulsory coverage of CARP. In 2006, the HLI management was able to get a temporary restraining order from the Supreme Court.

Months after Aquino assumed presidency, the HLI management offered a compromise deal with the farm workers. Under the agreement, farm workers will waive and agree to withdraw any and all claims, including those arising from employer-employee relationship, complaints, petitions filed, or to be filed, with the DAR [Department of Agrarian Reform], PARC [Presidential Agrarian Reform Council], administrative, quasi-judicial and/or judicial bodies, or any other matter arising from or incidental to the MOA [memorandum of agreement], or any dispute between HLI and the farm workers.

“The Cojuangcos have been twisting the law for so long. They did not comply with the 1957 agreement, the 1985 court ruling and now, they want to reverse the SC decision,” Mesa said.

Speaking at the press conference, Fr. Edu Gariguez, executive secretary of Catholic Bishops’ Conference of the Philippines-National Secretariat for Social Action (CBCP-Nassa) said: “We thought that after the SC decision, the farm workers have already obtained justice but incidents show that the Cojuangco-Aquinos never stop in their attempts to maintain control of the land.”

Gariguez said Aquino, as chair of the Presidential Agrarian Reform Council, should thwart all actions, including the motion filed by his family that would impede the distribution of the land.

Gariguez said Aquino should slow down in attacking Corona for his assets. “Look who’s talking. The Cojuangcos have many properties. They own thousands of hectares of land. If he is running after Corona, he should first look at his family. It is an issue of social injustice that while a few have so many, the majority have so little,” Gariguez said.

Iñiguez said justice and truth must prevail in Hacienda Luisita.