MANILA – Five days before Christmas, while travelling from Manila to Hacienda Luisita, farm worker Rodel Mesa received a text message. Instead of words, he got graphic representation of a bullet. “Where is the gun?” he replied in Filipino. “Do whatever you want,” he added.

On January 2, his fellow leader, Lito Bais, also received a text message from an unknown sender. “Your days are counted,” the message read. To which, Bais replied: “Be fast. You might go first.”

On January 11, Felix Nacpil Jr., chairman of Alyansa ng Magbubukid sa Asyenda Luisita (Ambala), said an employee of the Cojuangco-Aquinos working at the golf course, told him: “You would have your day.”

After the Supreme Court issued its November 22, 2010 decision ordering the distribution of 4,916 hectares of Hacienda Luisita land to the original 4,296 original farmworker beneficiaries (FWBs), farm workers continue to face threats and intimidation.

Mesa said 200 soldiers from the Northern Luzon Command (Nolcom) have been stationed at the border of the Balete and Cutcut villages inside the hacienda. The soldiers occupied structures of what used to be an aqua farm of the Cojuangcos.

The soldiers roam the villages and recruit members of the Citizens Armed Force Geographical Unit (Cafgu) among the residents, according to Bais.

Speaking at a press conference, Fr. Greg Obejas, convenor of the Luisita Peasants and People’s Alliance (Luppa) and a member of the Promotion for Church People’s Response (PCPR) said the military presence sows fear among the farm workers.

“We now ask the government: what is the reason behind the military presence? The people fear them because of past incidents of harassment and violence,” Obejas said.

Obejas added farm workers should be able to move freely, to till their lands for survival.”

On Dec. 1, Ambala sent a petition before the Department of Agrarian Reform (DAR) office in Quezon City asking for the pullout of the military inside the hacienda. Bais said when they followed up the status of the petition, DAR officials told them the petition has been forwarded to the Commission on Human Rights (CHR).

Bais and 22 other leaders and members of Ambala, including five village officials, have been charged by the Rizal Commercial and Banking Corporation (RCBC) with grave coercion and occupation of real property at the Municipal Trial Court of Tarlac.

On January 3, the Tarlac Prosecutors Office released the case resolution indicting Bais, chairman of United Luisita Workers Union (Ulwu) and the other members of Ambala and Ulwu. Warrants of arrest may be issued any time by the local court. 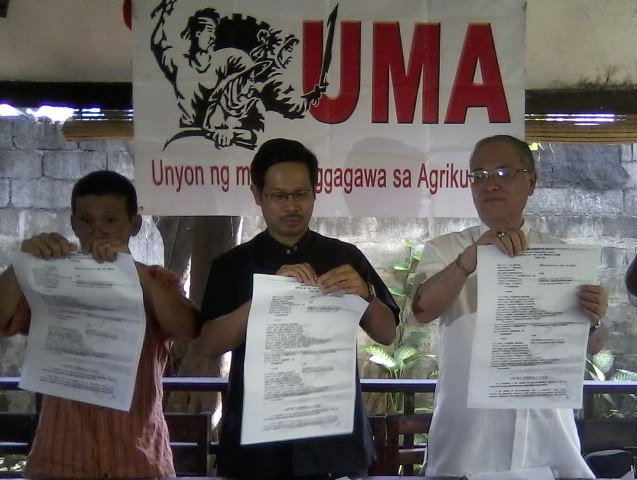 RCBC filed the charges in July, two weeks after the farm workers cultivated portions of the 500 hectares of land being claimed by the RCBC.

Some 184 of the 500 hectares were turned over by the Hacienda Luisita Inc. (HLI) to RCBC as payment for a loan more than five years ago.

On January 5, Ambala filed a petition before the Department of Agrarian Reform (DAR) seeking to revoke its order six years ago converting the 500 hectares from being classified as agricultural to industrial. The DAR has yet to decide on the petition.

“According to the law, for land to be considered converted, there should be development within five years. In this case, the land has been idle for 15 years. This is why we filed a petition to revoke the conversion order,” Bais said.

Seeing that the land is suitable for production, Bais said, they cleared the land and planted palay, vegetables and other crops.

“We did it to ease out hunger, to survive, to feed our families. We never expected that the cost would be criminal charges and the possibility of being imprisoned. Is this the kind of system that we have?” Bais said.

“The RCBC is colluding with the Cojuangcos in harassing the farm workers by filing criminal charges…RCBC knows that the contested land remains agricultural in use and should therefore be distributed to the farm workers,” Felix Nacpil Jr., chairman of the Ambala, said.

In its resolution, the Tarlac City Prosecutors Office cited that the Supreme Court ruling dated Nov. 22, 2010 declared that the RCBC is a buyer in good faith.

Ambala argued the SC decision has not attained finality and the petition they filed before DAR remains pending.

Mesa said the land being claimed by the RCBC should be included in the 4,916 hectares of Hacienda Luisita land to be distributed to the farm worker beneficiaries. He pointed out that the 6,443- ha plantation should have been returned to their ancestors as early as 1967 if only the Cojuangcos complied with the loan agreement with the Government Service Insurance System (GSIS).

In support of the farm workers, Fr. Edu Gariguez, executive secretary of Catholic Bishops’ Conference of the Philippines-National Secretariat for Social Action (CBCP-Nassa) said: “The farm workers who should achieve justice are now the ones being threatened of imprisonment. What is happening is a big irony.”

Leaders of Ambala and Ulwu said they would face the arrests with massive protests.

In a separate statement, Joseph Canlas, chairman of the Alyansa ng Magbubukid sa Gitnang Luson (AMGL) said that should the court would favor RCBC, they would mobilize all their members in the region to defend the cultivation and the camp-out of Hacienda Luisita farm workers.

Canlas also called on their supporters in Metro Manila to immediately protest at the RCBC main office in Makati if warrants of arrest would be issued.

Mesa said if Aquino “pushes with the grand scheme of preventing Hacienda Luisita’s eventual distribution to farm workers,” he would face massive protests.