Hilario Bantew and Edward Galao, two of the four civilians arrested in Cervantes, Ilocos Sur, were charged with anew with multiple attempted homicide and illegal possession of ammunition by the 50th Infantry Battalion of the Philippine Army.

In a resolution dated October 20, 2011, 3rd Assistant Provincial Prosecutor Cristopher Habab found no sufficient evidence to show that Bantew and Galao took arms for the purpose of removing their allegiance to the government, thus the rebellion charges were dismissed. However, the resolution said that the alleged shooting of soldiers by the respondents constitutes multiple attempted homicides.

The resolution, released October last year, a month after they were arrested by the joint forces of military and Philippine National Police (PNP)-Cervantes, did not reach the victims, their families and even their legal counsel until they were able to obtain a photocopy at the Commission on Human Rights (CHR) Regional Office 1.

Omir Cacho, head of the investigative team of the CHR-RO 1, said that they were surprised to know that the families and even Robert Tudayan, legal counsel of the Cervantes 4, were not informed and never received any copy of the decision. “We see that the Prosecutor and the Court had difficulty in coordinating the updates on the cases,” he noted.

According to the Ilocos Human Rights Alliance (IHRA), a local chapter of Karapatan, Bantew and Galao, as well as Luinesa Bonella and Joy Attiw, are innocent civilians falsely accused of being members of the New People’s Army (NPA). The four, called Cervantes 4, were arrested and detained in separate incidents in September and October 2011 after 50th IBPA under 503rd Brigade headed by Col. Eliseo Posadas conducted operations in several communities of Cervantes, Ilocos Sur and some parts of Mountain Province, Benguet and Abra. 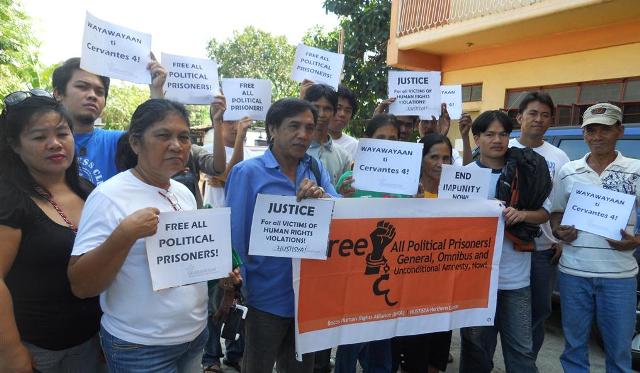 Families of the Cervantes 4 troop to the Commission on Human Rights Region 1 office to file complaints against the military and police who arrested and detained their loved ones.(Photo courtesy of Ilocos Human Rights Alliance / bulatlat.com)

Bonella and Attiw are detained at the Ilocos Sur Provincial Jail in Vigan City, Ilocos Sur and have been charged with rebellion.

Mila Marcelo, public information officer of IHRA-Karapatan, said: “It has already been proven that the victims were civilians, their families and even their local governments have already attested to that.” “The Cervantes 4 should be immediately released.”

Bantew’s brother, Prudencio, said had they not visited the CHR office, they would not know that the arraignment of his brother was set January 19. “We are dismayed by continuing denial of justice to my brother,” Prudencio said in Ilocano.

Prudencio, together with Galao’s parents, and barangay captain Elmer Galula trooped at the CHR office to file complaints against the military for illegally arresting, detaining and filing fabricated charges against the four civilians vilified by the military as “local communist terrorists.”

Prudencio said his brother Hilario, as well as Edward Galao, has long been suffering from the crimes he never committed. He said his brother just came out from a rehabilitation facility for mental illness when the arrest took place.

“The military has shown no mercy to my brother,” Prudencio said, saying that in the afternoon of September 23, his brother was just roaming around Cervantes, Ilocos Sur when he was arbitrarily arrested by the PNP. Bantew and Galao were arrested on Sept. 23 last year shortly after an encounter between the NPA and government forces near the Catcateng river, Concepcion, Cervantes, Ilocos Sur.

“The Commission will see to it that justice will be served to them,” CHR’s Cacho said in a dialogue with the families of the victims.

Marcelo said that the new cases filed against Bantew and Galao meant to harass and instill fear among the indigenous people’s communities. “They are desperate enough that they resort to criminalizing innocent civilians and militarizing communities to gain ‘victory’ in their operations.”

Marcelo said the CHR should not only investigate the charges but also look into the military’s violations of the civil and political rights of the four civilians.