KMP secretary general Danilo Ramos said the deal was actually part of a larger project worth $300 million. The project, he said, was originally launched two years ago and aims to ensure Bahrain’s food security and promote the agribusiness sector.” 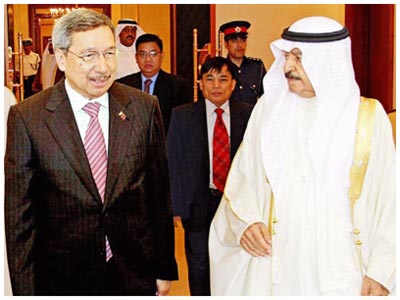 Ramos said that it was “revolting” how Philippine lands are being devoted for the food security needs of other nations while Filipino farmers suffer worsening landlessness, hunger, and poverty. He criticized Dr. Amable R. Aguiluz V who serves as the Aquino government’s Special Envoy to the Gulf Cooperation Council. Aguiluz’’ family owns the AMA Group Holdings that established a joint venture called “RP Harvest” with Bahrain’s Hassan Group, to cultivate bananas, rice and other crops on a 10,000-hectare land in the province of Davao Del Norte in Mindanao.

“This so-called joint venture smacks of land-grabbing and conflict of interest on the part of President Aquino’s political lieutenant in the Gulf,” Ramos said. “Ambassador Aguiluz, the Department of Agriculture, and the Department of Agrarian Reform have a lot of explaining to do on this massive sell-out of our lands. A no-holds-barred probe on Aguiluz is in order.”

The peasant leader said there was no doubt that the treasonous economic deal was being brokered with the blessings of President Aquino. Ramos warned that the joint venture with Bahrain is bound to displace thousands of farmers in the Davao region.

“The Aquino government’s sell-out of our lands will surely fuel agrarian unrest and face intense resistance from farmers in the Davao region,” the KMP leader warned.

In response to KMP’s call for an investigation, the legal counsel of AMA Group has issued a clarification that the deal with Bahrain did not push through supposedly because there was a lack of suitable land.

In reports to the media, Enrico Mira of the AMA Group said there was no need for an inquiry and that KMP’s Ramos made a mistake. He said that the call for investigations by Ramos was “unfortunate” and “misguided.”

According to Mira, the deal was intended to help the Philippines and develop the countryside by generating employment for the poor and spur exports. He also accused Ramos, by opposing the deal, of keeping farmers from securing opportunities to earn more and learn new technologies. The project, he went on to say, intended to promote farmers’ cooperatives.

The KMP, for its part, said it’s call for investigations into the Bahrain deal still stands. It said that the AMA Group should show proof that the joint venture quickly fell through days after the signing of the deal last January 18, 2012.

“The AMA Group’s denial of the joint venture project further reinforced the political necessity to conduct an investigation on the sell-out of agricultural lands and most importantly the involvement and possible conflict of interest on the part of Ambassador Amable Aguiluz on the reported deal,” Ramos said.

He explained that the inking of the $50 million deal was reported, among others, by the “Gulf Daily News” and the “Trade Arabia Business News Information” last January 19, 2012 and was also posted in the Sudan Commerce News website on the same day.

Another report on Akhbar Al Khaleej, an Arab newspaper cited how the Philippines has provided the Nadir and Ibrahim Sons of Hassan Group with public land to grow crops including sugar, rice and bananas among other fruits over a five-year-period. The report quoted Group executive director Ibrahim Al Ameer.

“Setting up agricultural projects in the Philippines follows instructions from His Royal Highness Prime Minister Prince Khalifa bin Salman Al Khalifa to meet Bahrain’s food requirements and encourage the private sector to enter into joint ventures to this effect,”Ameer further said in the report dated January 19.

“If not for these news from the Gulf, farmers will be completely in the dark over this planned massive sell-out of farmlands in Mindanao,” the peasant leader said.

Ramos also said Mira was going too far in calling the KMP as anti-farmer by justifying the reported deal.

“AMA Group’s mindset is similar to the deception being employed by the landlord President in duping the Filipino peasantry. Mira should simply look at the irony that the Filipino people continue to suffer from worsening hunger while the Aquino government devotes our lands to feed other nations and special envoys ink deals for their business interests,” he said.

Ramos said that once the joint venture pushes through, more farmers will be forced to deteriorate into agricultural workers instead of empowered land-owning farmers. “They will be further denied of their rights to the lands similar to what transpired with the notorious stock distribution option (SDO) in Hacienda Luisita,” Ramos said.