MANILA — Urban poor leader Carmen Deunida, more commonly known as Nanay Mameng, celebrated her 84th birthday last February 8. She shares this special day with two known politicians in the country — the late Senator Claro Recto whom she looks up to and another, President Benigno S. Aquino III, who, she said, has done nothing to serve the interest of the poor.

“How could I greet the president a happy birthday when he has done nothing to serve the interest of the poor?” Deunida, chair emeritus of urban poor group Kadamay, said during the protest action.

Deunida joined urban poor groups, spearheaded by the Alyansa Kontra Demolisyon, a nationwide alliance against demolition, in “celebrating” Aquino’s birthday in Mendiola. They brought with them a “gift” where they pasted the government’s anti-people policies and a caricature of the president, which they burned during the program.

“If Aquino would continue his anti-poor policies until the end of 2012, it is possible that it would be his last birthday in Malacañang,” Estrelieta Bagasbas, spokesperson of Alyansa Kontra Demolisyon, said. 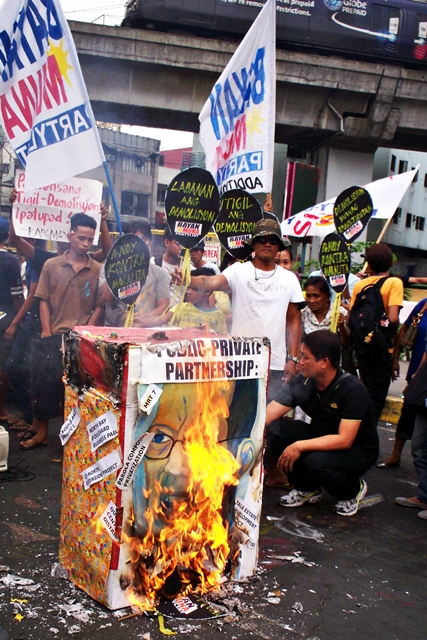 Aquino was not in Malacañang for his birthday. He was visiting the families who were affected by a recent 6.9 magnitude earthquake that hit Dumaguete and its neighboring provinces. But Bagasbas doubts the president’s sincerity over the affected families’ welfare.

“Aquino sees the poor when they are badly hit by a calamity. Yet there are also thousands of families who might lose their homes to give way to big projects which would not benefit them. Can we call this as being one with the poor?” Bagasbas said.?

She adds that visiting the families affected by the earthquake is a mere photo opportunity. In a statement, Bagasbas said the government’s response to disasters has always been limited to having their picture taken as they distribute goods, among others. She reminds the Filipino people that thousand of families whose homes were ravaged by Typhoon Sendong are still staying in evacuation centers in Cagayan de Oro and Iligan City.

“But ironically, the government continues to endorse large scale mining in Mindanao,” she said.

Bagasbas urged Aquino to heed the calls of the urban poor and face the roots of the worsening poverty in the country. “It is not enough to visit poor families affected by the calamity. For as long as the Urban Development and Housing Act, oil deregulation law, among other anti-people policies continue, the plight of poor Filipinos remains.”

Deunida said she is celebrating her birthday in Mendiola to make sure that Aquino will hear the demands of the urban poor. She urged Aquino to straighten the crooked path that he is taking.

“My birthday wish is for Aquino to step down as president,” she said in a media interview, adding that Aquino has done nothing to address the call of urban poor particularly in the continuing demolition of communities, homelessness and lack of local job opportunities.

She also urged her fellow activists to remain vigilant in the plight of the urban poor, saying that it is the people who could control their fate. Deunida said, “I am already old. And I am willing to give my life for our country.”