“Arroyo deserves to be detained in a jail facility, not a hospital. We are angry that the Aquino government, for all its pretensions of going after Arroyo, is giving her special treatment,” said Elmer “Bong” Labog, KMU chairman, said.

Last week, a Pasay regional trial court judge has allowed the former president’s stay at the VMMC for health reasons. Presidential spokesperson Edwin Lacierda said Malacañang respects the decision of the court, “having relied on the medical opinion of her attending physician and with due accord to her position as former president.”

Arroyo is detained for charges of electoral sabotage.

“How can the Aquino government move heaven and earth to impeach Corona, Arroyo’s accomplice, and let Arroyo herself, the bigger criminal, as well as Palparan, have a comfortable stay in a government hospital? That is only possible if the Aquino government’s goal in impeaching Corona is not to punish Arroyo and the likes of Palparan but to advance other interests,” Labog said.

It is publicly known that Malacañang had a hand in the impeachment of Supreme Court Chief Justice Renato Corona by the House of Representatives in December.

Retired Maj. General Jovito Palparan Jr., meanwhile, is Arroyo’s favorite general who is still at large despite a pending warrant of arrest for charges of kidnapping and serious illegal detention. Palparan is implicated in the disappearance of University of the Philippines (UP) students Karen Empeño and Sherlyn Cadapan. 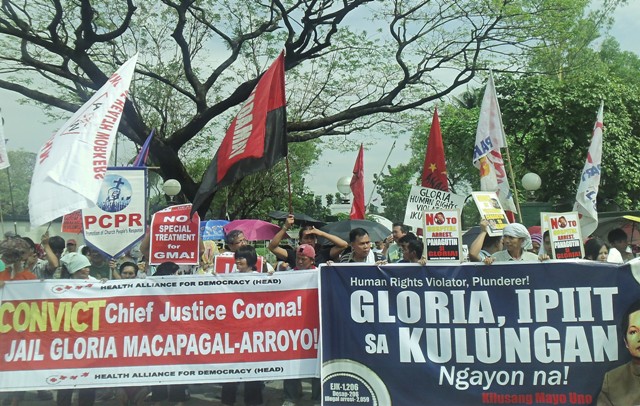 KMU said the special treatment being accorded to Arroyo shows that the Aquino-sponsored impeachment trial of Chief Justice Renato Corona is not meant to make Arroyo accountable for her crimes.

“It is getting clearer and clearer by the day that the government’s drive to impeach Corona is mainly about Hacienda Luisita; how the president’s family can retain ownership of the hacienda or gain more from the ‘just compensation’ being ordered by the Supreme Court in its decision on the matter,” Labog said.

In November, the high court issued a unanimous ruling in favor of the farm workers of Hacienda Luisita by ordering the distribution of the hacienda land to the farm worker beneficiaries.

In a separate statement, the Health Action for Human Rights (HAHR) said there is no “medical and moral basis” for Arroyo’s continued stay at VMMC. Members of HAHR joined the picket at VMMC, saying they are sick of the Aquino administration’s special treatment for Arroyo.

“As health workers, everyday we witness and hear stories of patients being turned away from hospitals because they have no money for hospitalization. For the government to spend taxpayer’s money on someone who does not even require hospitalization is just sickening,”
Carlos Montemayor, Jr. of HAHR said.

The group noted that when former President Joseph Estrada was confined at VMMC from
2001-2003, the government paid P1.7 million ( $39,534)on water and electricity alone. Arroyo is staying in the same suite which Erap occupied.

“With Arroyo’s continuing confinement at VMMC, money that can be used for medical care of
indigent patients is taken away,” Montemayor said.

Using the amount spent during Erap’s confinement at VMMC as reference, Montemayor said “That amount is enough to cover the cost of oral antibiotic treatment for four thousand five hundred (4,500) pneumonia patients. Or complete a six month-course of treatment for tuberculosis for sixty (60) patients. Or open heart surgery for five charity patients at the Philippine Heart Center.”