You Are Here: Home → 2012 → February → 22 → 10th year of legalization of contractualization marked with nationwide protests

10th year of legalization of contractualization marked with nationwide protests

More than 60-percent of Filipino workers today suffer job insecurity and persistent case of “endo,” short for end of contract, every three to five months.

MANILA – Last Thursday February 16, the hundred-plus janitors of the Polytechnic University of the Philippines (PUP) were gripped with terror when they reported for work and found almost 200 new workers ready to take over their jobs. The new janitorial agency contracted by the university had brought in new people.

“We wasted no time,” said Rey Cagomo, president of the janitors’ organization, the Samahan ng Janitors sa Polytechnic University of the Philippines (SJPUP). They assembled themselves, brought in a sound system, laid down placards on the ground and started a program. “We showed the PUP administration that we are united and determined to fight for our jobs and our lives,” Cagomo said.

What was supposed to be an ordinary working day for the janitors turned into a picket-protest in front of the PUP main building, as they demanded to be retained in their job and be absorbed as regular workers of the university.

Their mass action prompted the PUP administration to hold a dialogue with the union, together with representatives of students and teachers. They later crafted an agreement, which stipulated that the workers will be absorbed by the new agency for a one-year contract. 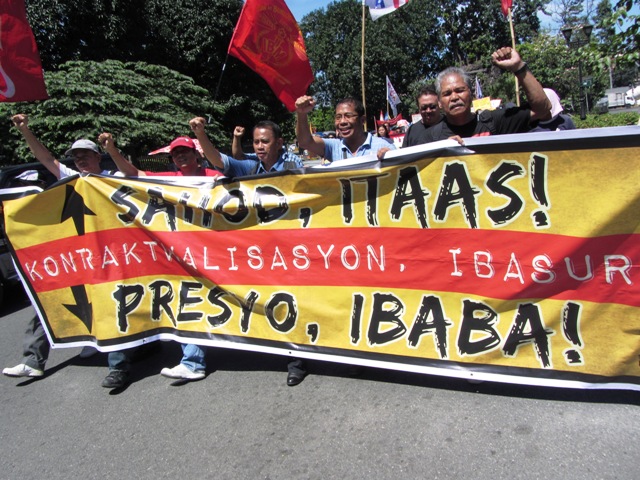 The workers viewed the temporary victory as just “another step forward” in their struggle to become regular employees of the university. “We will be absorbed, which is good, but still as contractuals,” said Cagomo.

Apparently, such struggle happens on a yearly basis for these janitors who have been working in PUP for many years now. “Every year, we face the prospect that we will not be absorbed by the new agency to which the PUP administration will grant a new contract,” Cagomo said.

More than 60-percent of Filipino workers today suffer the same job insecurity. In fact, they have coined a name for it — “endo,” short for end of contract. Most workers suffer this every three to five months.

The modus operandi in contractualization includes giving workers a three to five month work contract, even in jobs that are considered as essential to a company’s nature of business and not just the janitorial or maintenance services. Some of the biggest examples are the tens of thousands of contractual workers employed by firms operating in special economic zones. They are reportedly working on its main products but they are still contractual and not regular.

Other examples are the workers of broadcasting giant ABS-CBN, shopping mall chains such as Henry Sy’s Shoemart, and even those in the big blue chip companies such as the Manila Electric and Railroad Co. or Meralco, air lines such as PAL, telecommunications companies such as PLDT, food companies such as Nestle and Dole Philippines, the country’s biggest banks, among others.

The job contractors can either be the chief employers, “directly hiring” the contractuals, or another agency supplying them with contractual employees. The worst fate that could happen to contractual workers was dying due to “accidents waiting to happen” at the workplaces, like what happened to contractual construction workers who fell while building an Eton condominium in Quezon City, and the deadly accidents in the ship repair facilities in Subic, Zambales. Labor advocates said the shirking of responsibilities by their contractors and main employers shows the dismal working conditions of the contractual employees, and the lack of direct accountability to them by the main employers. 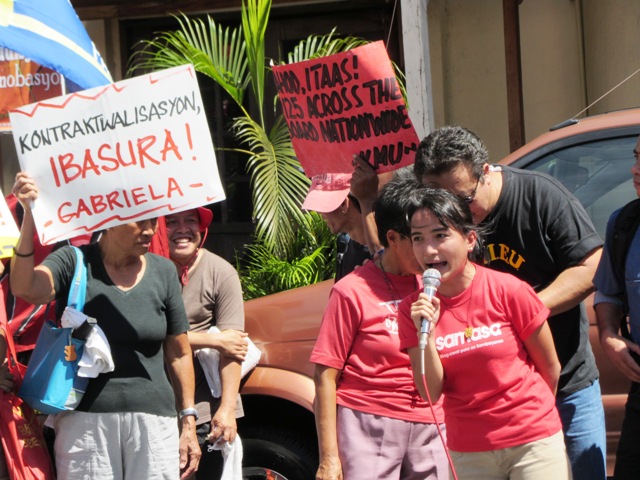 The reason why workers’ contracts have to cover only a maximum of five months lies in the Labor Code stipulation that workers employed for more than six months should already be regularized, and provided with benefits, higher wage rates and job security.

With contractualization, the workers’ regularization is avoided even if the workers’ contracts are continuously renewed. As contractual and not regular workers, their wages are often lower while their benefits are lesser if they receive some at all.

“Contractualization has long been a scourge to workers across the country,” said Elmer “Bong” Labog, chairman of KMU. He blames this employment scheme for having plunged workers “deeper into the status of slaves.”

“Contractuals who comprise the majority of the country’s workers receive lower wages, do not receive benefits, have no job security, and are denied their trade union rights,” Labog added.

Instead of finding a savior in the labor department, the labor sector said it gave employers “the license for contractualization.” That license, the DOLE Order No. 18-02, has now been in force for 10 years.

In Metro Manila, more than a hundred workers trooped to the main offices of the Department of Labor and Employment to condemn the order that “legalizes contractualization in the country.” In other parts of the country, chapters of the labor center and their supporters also protested the labor department’s order.

Much like its bitterly criticized predecessor, this DO 18-02 claims to ban labor-only contracting, yet, at the same time, it gives out guidelines on how capitalists can legally undertake the derided employment scheme, the KMU said.

The labor department’s order allows employers to implement labor-only contracting once they are granted registration as job contractors. Unfortunately, based on the list of labor complaints, the DO 18-02 has made it easy for just about any firm to be registered as a job contractor. Other companies, meanwhile, resort to “outsourcing” or forming third party companies who hire contractuals for them.

“Companies form their own subcontracting companies, sister companies, etc., with the purpose of hiring contractual or lesser paid workers performing the same work for the parent company,” said Labog.

Because of this increasingly becoming prevalent practice (from 60-percent pre-DO 18-02 to nearly 70-percent today, according to the KMU), the daily minimum wage rates in the country, now pegged at P404 ($9.40) in the capital where it is relatively the highest, is reportedly not being enjoyed by many employed workers. As exposed in recent deadly workplace accidents in Lucio Tan’s Eton construction and in Hanjin and Keppel shipyards, contractual workers receive lower than minimum wages. 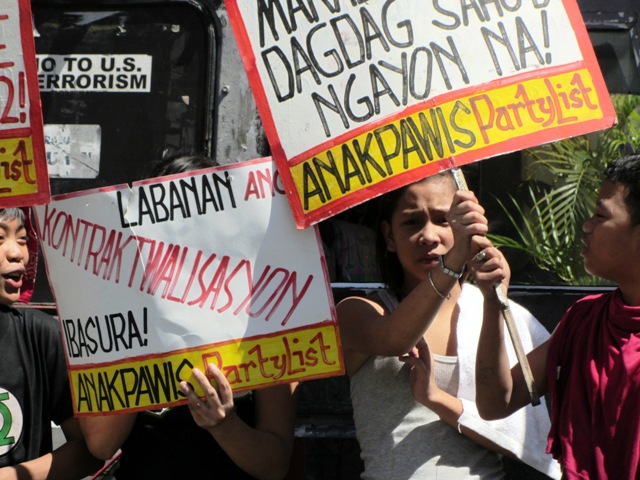 Women comprise many of the lower-paid contractuals. (Photo by Marya Salamat / bulatlat.com)

“Women contractual workers receive wages lower than those received by male contractuals. They are denied maternity benefits when they get pregnant and in some special economic zones, pregnancy automatically means being booted out from work,” Labog said.

The KMU called on workers, both male and female, contractual and regular “to unite in pushing for the scrapping of the contractualization order. Labog also invited the support of other workers in pressing Congress to approve the House Bill 5110 filed in Congress by the Anakpawis Partylist to call for the regularization of workers and to ensure that workers get decent jobs and pay.