“It is a testament to how the President’s family mobilizes state security forces to suppress the just and legitimate assertion of the farm workers over the lands.” – KMP

MANILA – Eight gunshots failed to break the resolve of farm workers of Hacienda Luisita in defending their right to cultivate the 300-hectare land being claimed by the Rizal Commercial Banking Corporation (RCBC).

On February 20, 100 security guards, ten elements of the Tarlac provincial police and 15 members of the Philippine Army escorted the fencing of agricultural lands at Balete village, the very site of the cultivation campaign of the farm workers.

“They thought we would be cowed by the gunfire. We had it when we were massacred on November 16, 2004. But we stayed put and continued to block the fencing. It is a triumphant defense of our rights to the land,” said Felix Nacpil Jr., Ambala chairman, referring to the massacre that claimed seven lives and wounded hundreds.

Nacpil said the RCBC, in collusion with the Cojuangco-Aquinos, wants to harass leaders and members of Ambala.

The RCBC also filed charges of grave coercion and illegal occupation of real property against 23 leaders and members of Ambala.

Farm workers started cultivating the land after the Supreme Court issued a decision in July 2011, stating, among others, that the farm workers must be given the option to choose between owning land or stocks. In a decision in November 2011, the high court unanimously ordered the distribution of more than 4,000 hectares of land to farm worker beneficiaries but also upheld that the RCBC is a “buyer in good faith.” 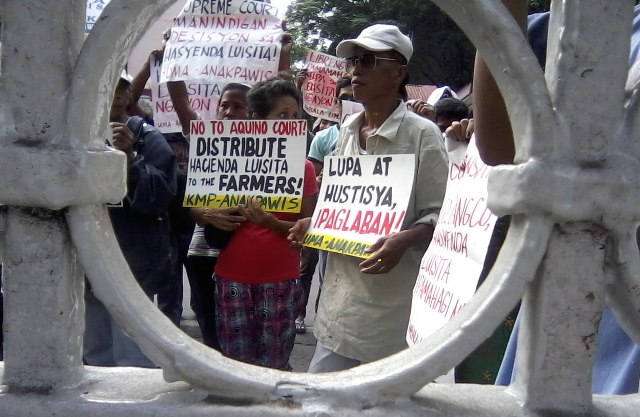 Farm workers of the Hacienda Luisita call on the Supreme Court to declare its decision with finality.(Photo by Ronalyn V. Olea / bulatlat.com)

According to Jobert Pahilga, lawyer of the Ambala and executive director of the Sentro para sa Tunay na Repormang Agraryo (Sentra), the RCBC acquired the 500-hectare land on November 24, 2004 as payment for the loan of Luisita Industrial Park Corporation (Lipco). The transfer was made eight days after the massacre.

“How could it be that the whole world, except the RCBC, knows that the land is under dispute?” Pahilga said in a forum last January.

“We are the legitimate owners of the 4,915 hectares of land and the Cojuangco-Aquinos must recognize that it is legally and morally ours. The decades-long oppression and deception by the Cojuangco should finally end so that we could peacefully cultivate Hacienda Luisita as our source of food and livelihood,” Nacpil said.

The Alyansa ng Magbubukid sa Gitnang Luson (AMGL) condemned the use of government forces, under the command of President Aquino, in attacking the farm workers.

“It is a testament to how the President’s family mobilizes state security forces to suppress the just and legitimate assertion of the farm workers over the lands. The Aquino government now replicates the state repression by the previous Arroyo government,” Randall Echanis, deputy secretary general of the Kilusang Magbubukid ng Pilipinas (KMP) said in a separate statement.

Echanis called on the Supreme Court to “immediately decide with finality on the distribution of Hacienda Luisita, including the more than 500-hectares illegally sold by the Cojuangcos to RCBC.”

“In light of the renewed attacks against the farm workers, the high court should now break the Cojuangco-Aquinos monopoly and control over the lands and put an end to the continuing feudal exploitation and oppression suffered by the farm workers from the hands of the President’s family,” Echanis said.

In the same vein, Anakpawis Rep. Rafael V. Mariano said, “While farmers are demanding for land and justice, the Cojuangco-Aquinos continue with their legacy of landlordism and violence against farmers.”

“Luisita farmers-beneficiaries are demanding for the immediate distribution of some 4,915-hectare agricultural lands in Luisita. Instead, the President’s family unleashed a series of attacks against farmers and farm workers fighting for their right to the lands.”

In a related development, members of Kilusang Mayo Uno (KMU) marched to the Supreme Court, Feb. 22, calling on the high court to junk the Cojuangco-Aquino family’s motion for reconsideration.

“We condemn President Aquino for advancing the interests of his family by emphasizing the provision on ‘just compensation’ which is contained in the Supreme Court decision,” Elmer Labog, KMU chairman, said.

“No compensation must be given to Aquino’s family. They have already siphoned too much from our farmers’ sweat and blood. The Cojuanco-Aquino clan should instead get jail time for the mass murder of farmers in the Hacienda Luisita massacre” Joel Maglunsod, Anakpawis executive vice president, said.

“Hacienda Luisita must be freely distributed to its tillers. They have already given enormous riches to the Cojuangco-Aquino clan from decades of exploitation and slavery. It would be unjust and inhumane to ask them for more,” he added.

The labor center also called on the high court to include in the coverage of the decision the 500-hectare land purchased by RCBC; include the 1,000-hectare land excluded by the decision; to firm up the provision on the Cojuangco-Aquinos’ payment to the farmers from the earnings from selling lands to corporations; and, declare the Stock Distribution Option in all haciendas in the country unconstitutional.

Anakpawis also slammed the slow-paced implementation of the Luisita ruling saying three months have already passed still, the SC has not released implementing guidelines for the decision.

“Are our justices cowed by the Aquino administration’s anti-Corona rhetoric? Will they give in to Aquino’s threats and favor the Cojuangco-Aquinos? We hope not. We urge the SC to hasten the implementation of the Luisita decision and distribute the lands to its tillers without any compensation for Aquino’s family” Maglunsod said.

The groups also called for the removal of all military detachments inside Hacienda Luisita.

“We cannot allow a repeat of the Hacienda Luisita massacre that killed seven farm workers in 2004. We hold the Cojuangco-Aquinos liable for the intensive militarization inside Hacienda Luisita,” Mariano said.

“We challenge President Aquino to direct his relatives to abide by the Supreme Court decision, distribute Hacienda Luisita and stop attacking the farmers-beneficiaries. Legally and morally, the Luisita lands belong to the tillers,” Mariano said.