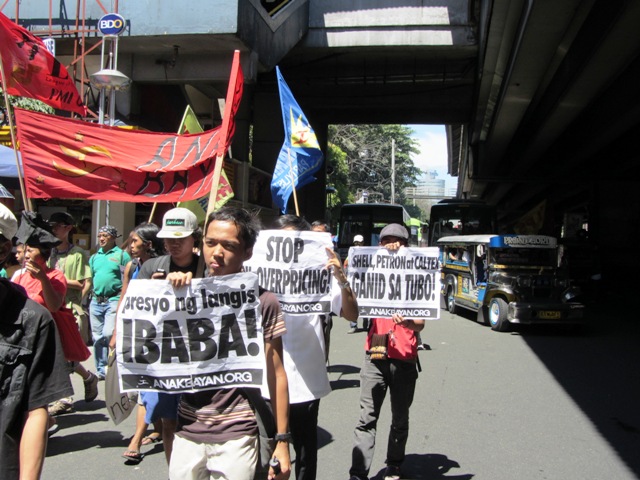 MANILA – Drivers and operators allied with Piston (Pinagkaisang Samahan ng Tsuper at Opereytor Nationwide) held an early morning noise barrage at Anda Street in Manila this Wednesday to protest what was then still looming as another round of oil price hike. On the same day, they marched to meet with a bigger group of protesters from the multisectoral alliance Bayan and Kilusang Mayo Uno. They held a louder and longer noise barrage in front of one of the gas stations of Petron, one of the leading oil firms in the so-called Big Three operating in the Philippines.

With placards requesting the motorists to honk their horn in agreement with the protesters – many motorists honked in response as they passed by – activists held a program interspersed with noise-making to sound their alarm at the unchecked “profiteering” of the oil companies, and “inaction” of the Aquino government. 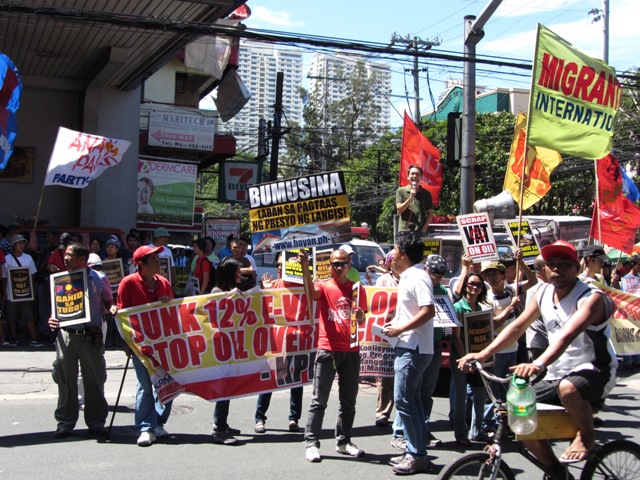 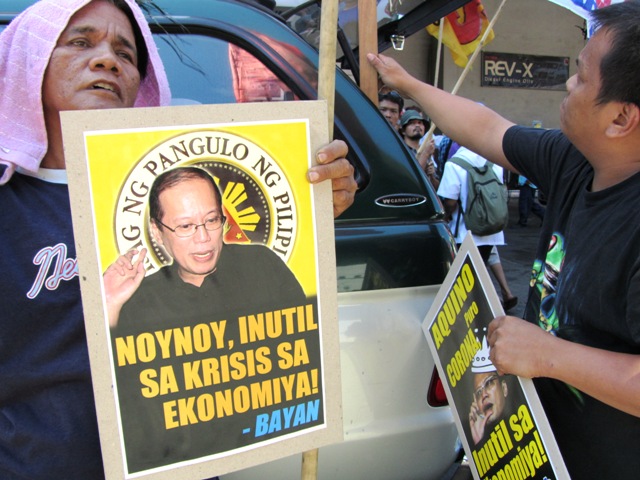 Protesters questioned the torturously slow pace of Aquino’s promised action, which is just a review, actually, of the Oil Deregulation Law, the law that reportedly ties the hands of the government in controlling the price spikes being implemented by the profitable oil companies. They also asked why, despite early warnings from oil companies of another price hikes this week, the Filipino consumers did not hear even a squeak of angry ‘opinion’ from President Benigno Aquino III, when he seems to be loquacious in expressing his ‘opinions’ on the Supreme Court Chief Justice Corona’s impeachment trial, as the Bagong Alyansang Makabayan (Bayan) pointed out.

On Thursday, the oil companies pushed ahead with their price hikes. Petron Corp., Pilipinas Shell Petroleum, SeaOil Philippines, Total Philippines and Eastern Petroleum raised the pump prices of gasoline by P1 to P1.35 per liter and by 50 centavos per liter for diesel and kerosene.

“The global oil cartel is gearing for more increases yet Aquino has not heeded calls for consumer relief, such as the removal of the VAT on oil. Aquino allies in congress have not taken up alternative bills to the oil deregulation law. Aquino’s indifference to the people’s plight says a lot about his “daang matuwid,” Bayan said.

Based on the group’s monitoring, the pump price of diesel has already increased by P2.65 per liter while unleaded gasoline has jumped by P4.60 after seven rounds of oil price hikes this year. During the same period, the retail price of an 11-kilogram cylinder tank of liquefied petroleum gas (LPG) increased by P115.50.

But instead of addressing the consumers’ demand for immediate relief, Aquino has only revived his already discredited Pantawid Pasada program, which gives a small amount of subsidy to public transport drivers. Recipients have complained that the ‘aid’ is not just insufficient, it is also difficult to acquire and worse, their cards sometimes “eat it up.” 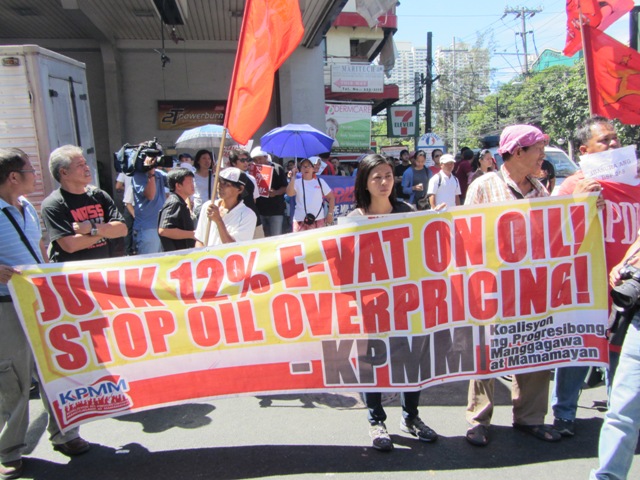 Not just the drivers’ protests

On March 15, peoples’ organizations are inviting the public to join a nationwide protest against oil price hikes, oil overpricing and Oil Deregulation Law.

“It is important for the government to know that it is not only the country’s drivers who are protesting against the oil price hikes, but most of the people, too,” said George San Mateo, national president of Piston. He said that most of us are affected by the oil price hikes.

The women agreed. “The Aquino government does nothing but watch the Filipinos suffer from worsening poverty,” Joms Salvador of Gabriela said at the rally against oil price hikes. She added that in the 14 years of oil deregulation law, the government has done nothing but ensure the profits of oil cartel while the people are pushed deeper into poverty. 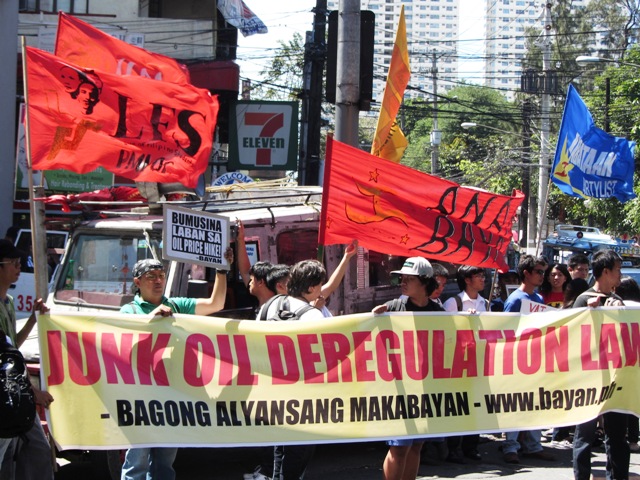 Most leaders of progressive peoples’ organizations who spoke at the picket-protest in Manila agreed that it is high time for the government to nationalize the oil industry, beginning with regulating it. But, as San Mateo of Piston said, “since the Aquino government is not about to do all these by its own accord, we have to push them to do it.”