Can their semantics circumvent the Constitutional ban on permanent stationing of US troops?

MANILA — Since 2002, under the auspices of the VFA, there has not been a single day when there are no “visiting” US troops in the country. This was the admission to the joint House of Representatives Committees on National Defense, Security and Foreign Affairs hearing this week by Lt. Gen. Edilberto Adan, executive director of the Presidential Commission on VFA (VFACOM), under the questioning of Bayan Muna Rep. Teddy Casiño.

Adan said the “operations” of the US troops here are being covered by their monitoring committee. These operations, including the bigger Balikatan exercises and many more small military exercises such as the Pistons and CARATS, he said, are planned a year ahead as to where and when they would be held. These can last three days to weeks, and can be participated in by fewer soldiers than a squad or up to several hundreds of US and Filipino troops. Adan said that up to 45 US military exercises are held in the Philippines each year, of which “only six are big like the Balikatan with thousands of participants.”

When asked if there had been a day under the VFA when there were no US troops stationed in the Philippines, Adan said “no, since we allowed them to stay and visit here.”

The admission prompted Casiño to describe the Visiting Forces as definitely a “misnomer.” How could you call them as “just visiting,” he asked, when they have stayed on indefinitely? While staying here, where do they sleep and operate from? Where are they based?

Casiño enumerated the oft-reported military installations of US troops in the South, which are “practically” military bases of the US troops here. These are on top of installations they use while conducting the military “exercises” in various locations in the Philippines, as covered by the VFACom.

“Let’s be truthful and let’s not fool ourselves with regard to terminologies,” said deputy speaker and Quezon Rep. Lorenzo R. Tañada III, as he reiterated an anecdote attributed to former president Joseph Estrada who approved the VFA because it said the troops are only ‘visiting.’ “But visiting became permanent,” said Tañada. 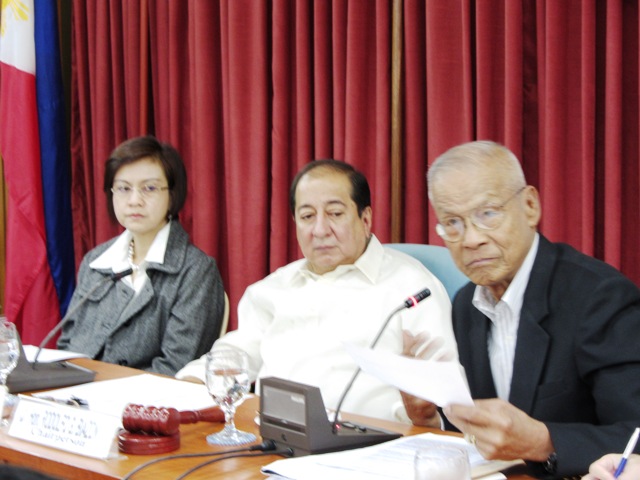 Chairmen of House panels on national defense and national security distinguish between the pro-VFA ‘government panel’ and anti-VFA lawmakers and civil society groups present at their hearing Feb 22. (Photo by Marya Salamat / bulatlat.com)

The said House hearing was convened this week to tackle pending bills in Congress calling for the abrogation of the Visiting Forces Act. There is a corresponding resolution in the Senate. The “government panel,” as referred to by Rep. Rodolfo Biazon at the hearing, was composed of ranking officials of the Armed Forces of the Philippines (AFP), led by Defense Secretary Voltaire Gazmin, Defense Undersecretary Pio Lorenzo Batino, Foreign Affairs Secretary Albert del Rosario, representative of the Department of Justice and Lt. Gen. Edilberto Adan from the Presidential Commission on VFA (VFACOM).

Citing the legal approval of the VFA by the Supreme Court and the Mutual Defense Treaty between the US and the Philippines, the government panel defended the VFA against moves in Congress to abrogate it.

It is not only in distinguishing between a “visit” and a permanent stay that the government panel defending the VFA and the lawmakers and civil society groups wanting its abrogation have opposite views.

In the matter of reviewing the VFA itself, the Presidential Commission on VFA (VFACOM) has not at all addressed the presence of American troops in Philippine soil or whether the US troops can come and go, visit or stay. Instead it has focused, so far, on the behavior of American troops while here, as Biazon himself noted based on Adan’s statements during the hearing.

Whether the American troops can visit and stay is not addressed in the VFA review because, in Adan’s interpretations, such matter is within the purview of the Mutual Defense Treaty (MDT). It is the VFA they are supposed to be reviewing and not the MDT. 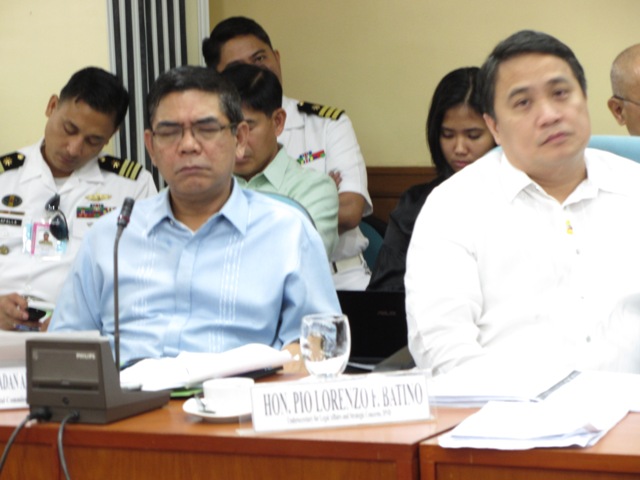 Lt Gen Adan and Defense Undersec Batino at the House hearing on bills seeking the abrogation of VFA. (Photo by Marya Salamat / bulatlat.com)

Adan said the VFA is just a mechanism for laying down “house rules for the visitors we’ve invited.” As house rules go, he said, they have reviewed the “more contentious” subjects such as that of criminal jurisdiction and finding mutually agreed upon detention facilities, for example, in case an American serviceman is to be detained here.

Asked about the result of that review, Adan replied that it is still a work in progress. “We are continually conferring and the results will be released in time.”

But asked also where in Mutual Defense Treaty (MDT) is it stated that US troops can station permanently in Philippine soil and waters, despite the Constitutional ban on it, Adan replied that, to his interpretations of the MDT’s Article 2 which direct the US and Philippines to jointly or separately develop its military capability to resist armed attack, “that is why the joint military exercises (under VFA) are being conducted. How could the Philippines and the US develop its capability jointly if there are no joint exercises?” he said.

To reports that the US troops in the Philippines have their own bases and camps especially in the South, Adan explained that “these are not permanent facilities but shared facilities that will be turned over to the AFP when they leave.”

The problem is, the US troops are not leaving, and you don’t know for how long they would be staying, especially now that they have announced their desire to increase their presence here, Casiño pointed out. Quoting Adan’s admission, Casiño added that since 2002 it is the US troops who have been using certain facilities inside a Philippine camp, “so it is practically the US troops’ military base.”

Foreign Affairs secretary Albert del Rosario denied at first in the congressional hearing that there were discussions on increasing the US military presence here, and thus their use of facilities here, but he later said that “for our national interest, to establish a minimum defense posture, we’re looking for other ways to increase (the) presence of our allies.” He added that that may call for “increased rotational presence” of US troops here.

Right now there are “no conclusion“ yet to talks between the Philippine and US governments about the said increase in US troops’ presence, said del Rosario. But another high-level meeting (involving the two countries’ defense secretaries, Foreign Secretary del Rosario and US state secretary) tackling that topic is to be held “perhaps in April.” Del Rosario disclosed that the “full bilateral” meeting will discuss issues about “military, defense, security, trade, and so on and so forth.”

Asked to disclose the contents of previous high-level meetings between US and Philippine officials, del Rosario said it included “possible navy equipment” the US government may donate to the Philippine military, and “other areas of national security which I am not prepared to discuss here.”

What do the US troops do while stationed or “exercising” in the Philippines? The mystery and secrecy surrounding it have prompted lawmakers such as Bukidnon Rep. Jose Zubiri, and not just the progressive bloc, to ask the government panel for reports and transparency.

At present, there have been reports that stationed US troops, mostly from US special forces, have been participating in local combat operations. But against reports that hospital doctors for example had identified a couple of US soldiers as responsible for shooting at a Filipino, Adan told the congressional hearing that “in the past there have been reported misdemeanors… in some cases they were misidentification.”

Adan said that the troops involved in the Buyong-buyong incident was the 18th IB in Basilan.

In 2002, an International Solidarity Mission held to investigate the presence of US troops in the country revealed that they have interviewed a woman Juraida Isnijal, 27, of Barangay Canas, Tuburan, Basilan, who reported that her husband Buyong-buyong was shot at by an American soldier, who, together with AFP soldiers, took him to the Lamitan District hospital. A doctor later identified the American soldier as Reggie Lane. Buyong-buyong has not been seen since. 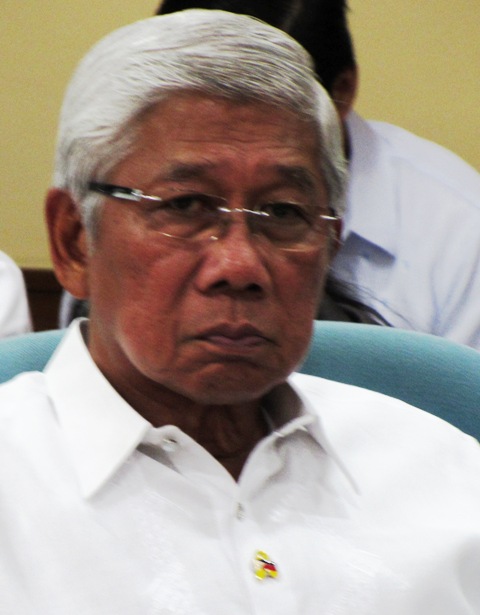 In broad strokes, Defense Secretary Voltaire Gazmin said the VFA contributes in the training and skills enhancement of the Armed Forces of the Philippines (AFP). The military trainings and exercises held here, said Gazmin, promote “interoperability” of the two forces.

Gazmin said that because of the “frequent use of AFP training grounds, the US spends on improving AFP training activities and camps.” He said the VFA also helps the AFP through “intelligence exchange” which includes providing them assistance in training, acquisition and use of equipment for intelligence gathering, surveillance, monitoring and intelligence data itself.

Gazmin further claimed that with the VFA there has been increased foreign military financing, such as grants and loans, “enabling the government to purchase military articles” and receive the US excess defense articles, all of which are “not charged to AFP appropriations but on grants.”

The defense secretary claimed too that from 2001 to present, the medical and dental services the US troops provide “alongside military operations create an atmosphere of peace.”

He also attributes to the VFA and to the US presence in the Philippines the “tempering of actions of non-state actors that undermine the state.”

But do the US troops stationed here participate in local combat operations, as many local reports suggest? The US troops are prohibited from joining local combat operations on the ground, Biazon said. Adan confirmed the prohibition, but he also said that participation of US troops in “combat-related activities,” which he did not elaborate, “fall under the umbrella of what is authorized.”

The MDT refers to joint or separate preparation of the US and the Philippines against “external attacks,” but as some lawmakers pointed out, the government panel is selling the advantages of VFA in “providing cooperation in counter-insurgency,” from surveillance to reconnaissance to mobility and other cooperation efforts.” Local insurgents are not “external” threats, said some lawmakers.

“We want them to help us in dealing with counter-terrorism,” del Rosario said early in the hearing. “The trainings and exercises are geared for “non-traditional threats,” Adan said later.

Major Gen. Francisco Cruz told the congressional hearing that the intelligence operations where the US troops give them support “cover many forms.” It can be training, education, exchange of information on a regular basis. He denied that the US troops are conducting espionage in Philippine soil. But he also said that in many instances, the intelligence shared by the US military to them “resulted in successful operations.”

If the US troops are not joining local combat operations or doing espionage activities themselves, how did they collect said intelligence? ACT teachers’ Partylist Rep. Antonio Tinio asked the AFP.

Major Gen Cruz replied, “They have sources from other countries such as Indonesia, etc., and from other agencies.”

After that, lawyers of the government panel cited sensitivity of some security matters which they said should no longer be discussed further.